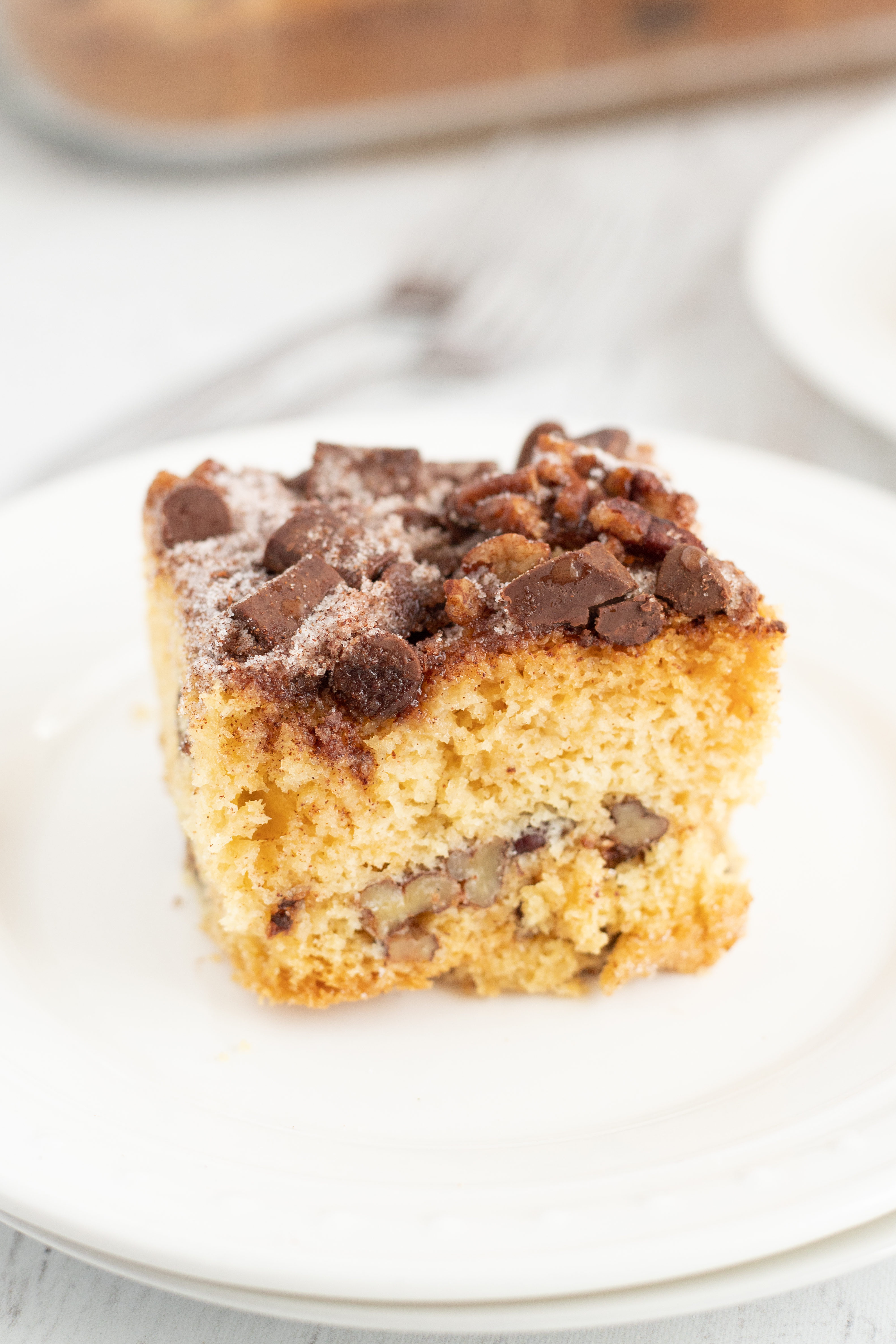 Milk chocolate, cinnamon and pecans layered in an incredibly soft and moist homemade  sour cream cake. Chocolate Cinnamon Coffee Cake is one fantastic coffee cake! I had an idea this was going to be good….I just didn’t know how good!  When I was finished making the batter, which was gorgeous by the way, I knew the cake portion of this recipe was going to be excellent.

The batter for this cake is thick and fluffy, good grief I loved just looking at it before it was baked!  It’s a dream batter and you could use it for so many other flavor combinations.  I have to admit though, the semi sweet chocolate chips and chunks plus the cinnamon and pecan that are in the middle and on top of the cake are PERFECT!!  When you take that first bite of half melted chocolate, cinnamon and pecans you think you’re in heaven and then comes the soft , moist texture of the cake and it’s like…it doesn’t get any better than this.  I love this coffee cake, it’s got it all!  We’re going to make Chocolate Chip Cinnamon Pecan Coffee Cake together so let’s gather the ingredients. 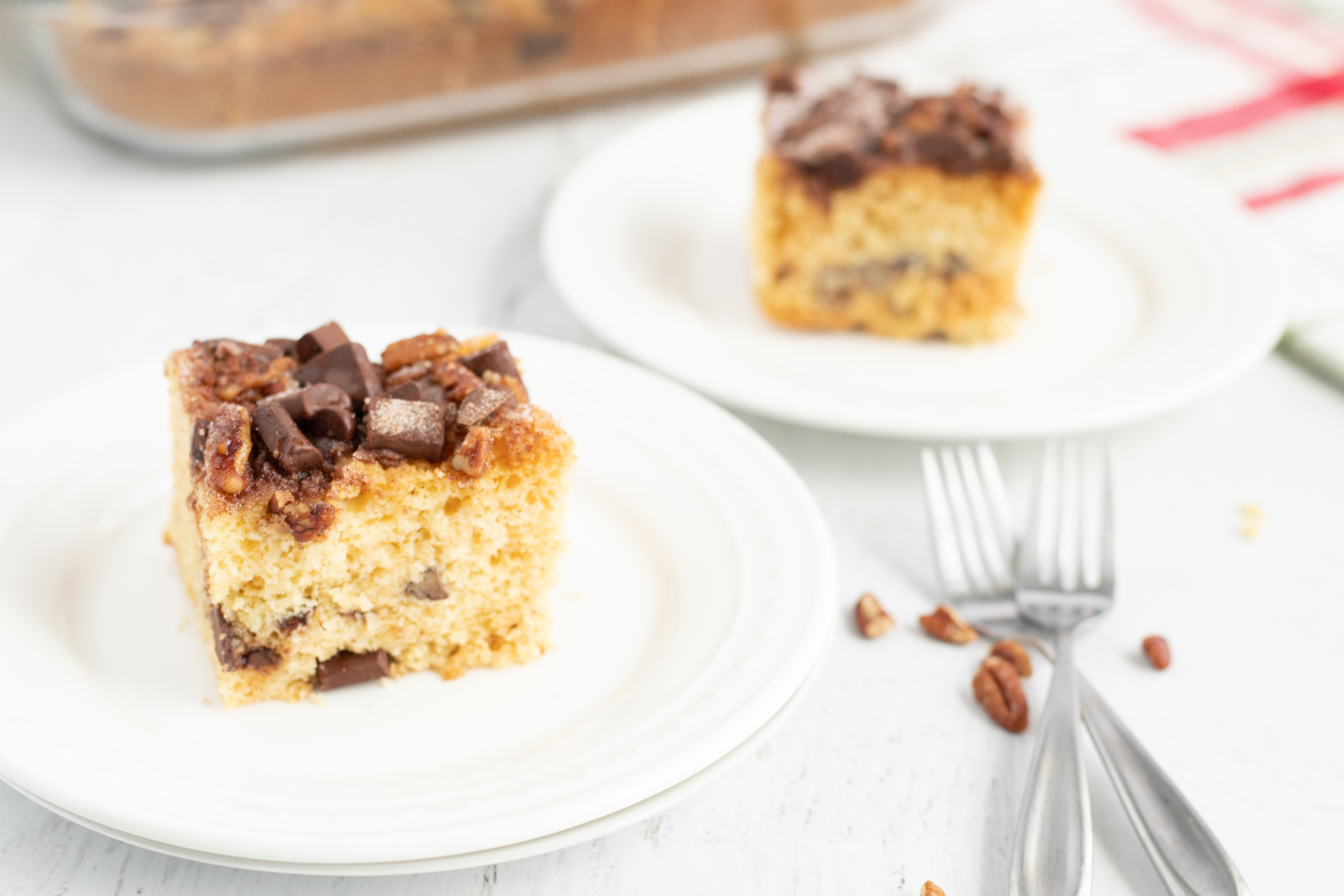 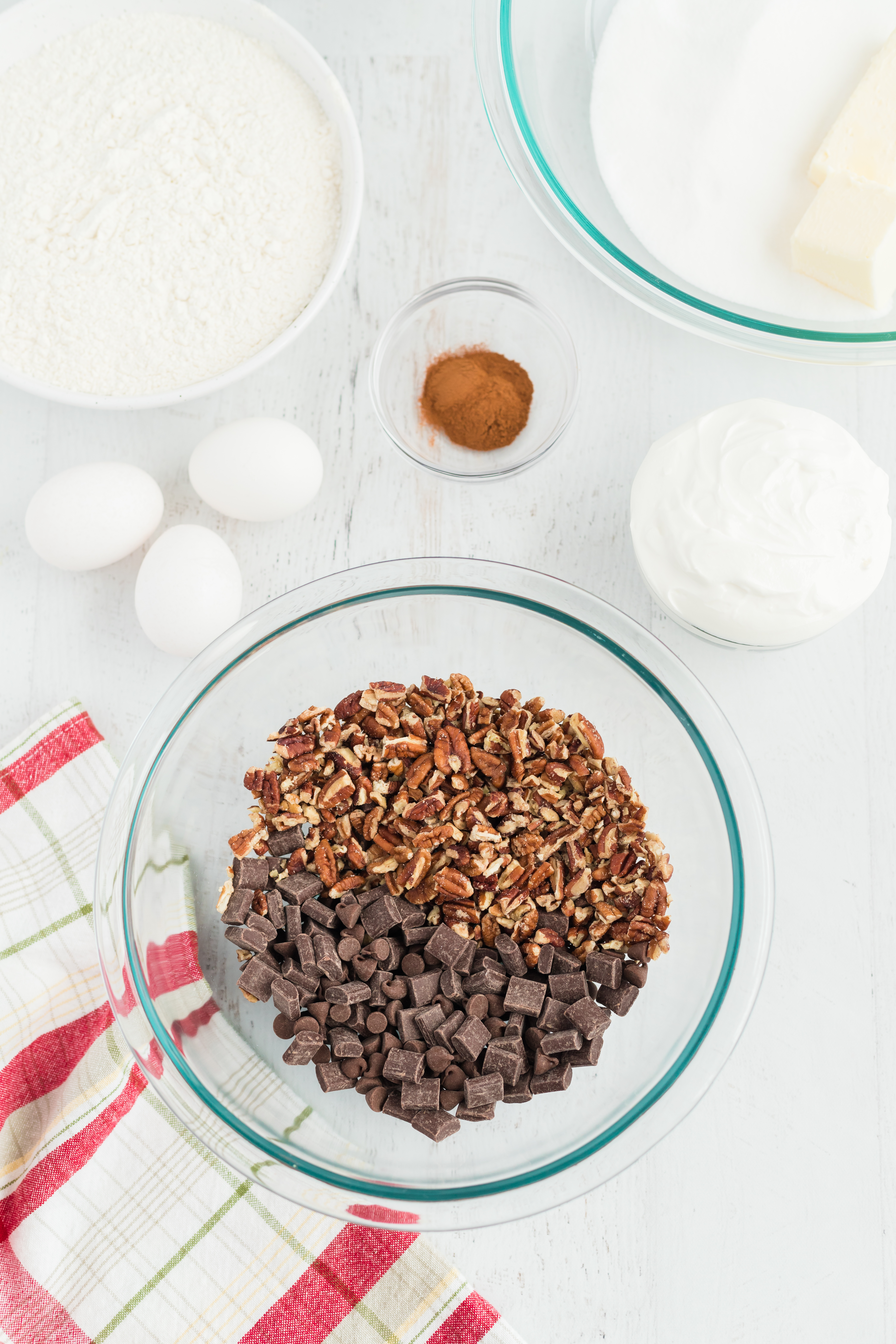 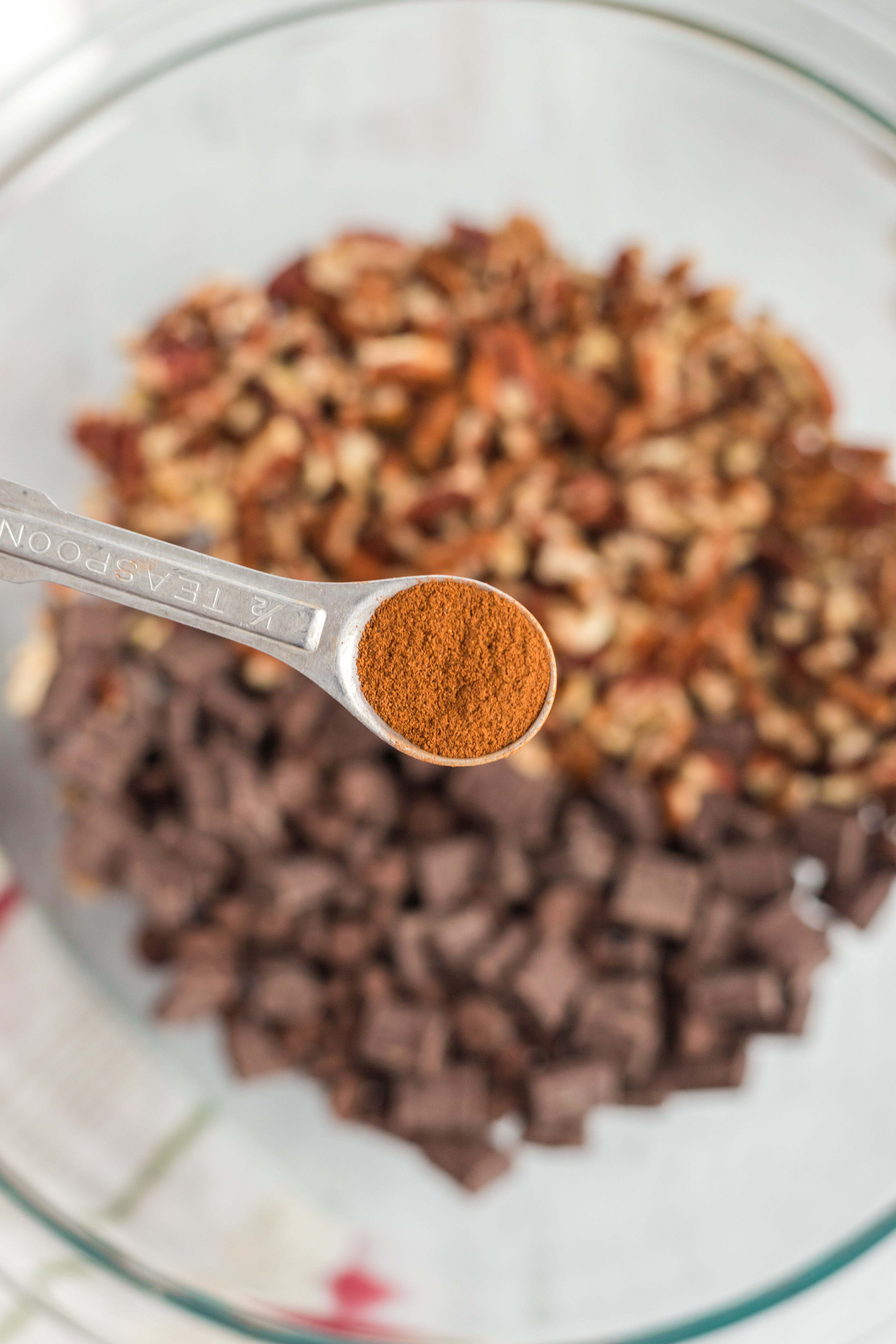 We start the recipe by placing the topping ingredients ,the semi chocolate chips and chunks, pecans, cinnamon and 2/3 cup of sugar in a medium bowl and stirring the ingredients together to combine them. Set the mixture aside while we make the homemade sour cream batter. 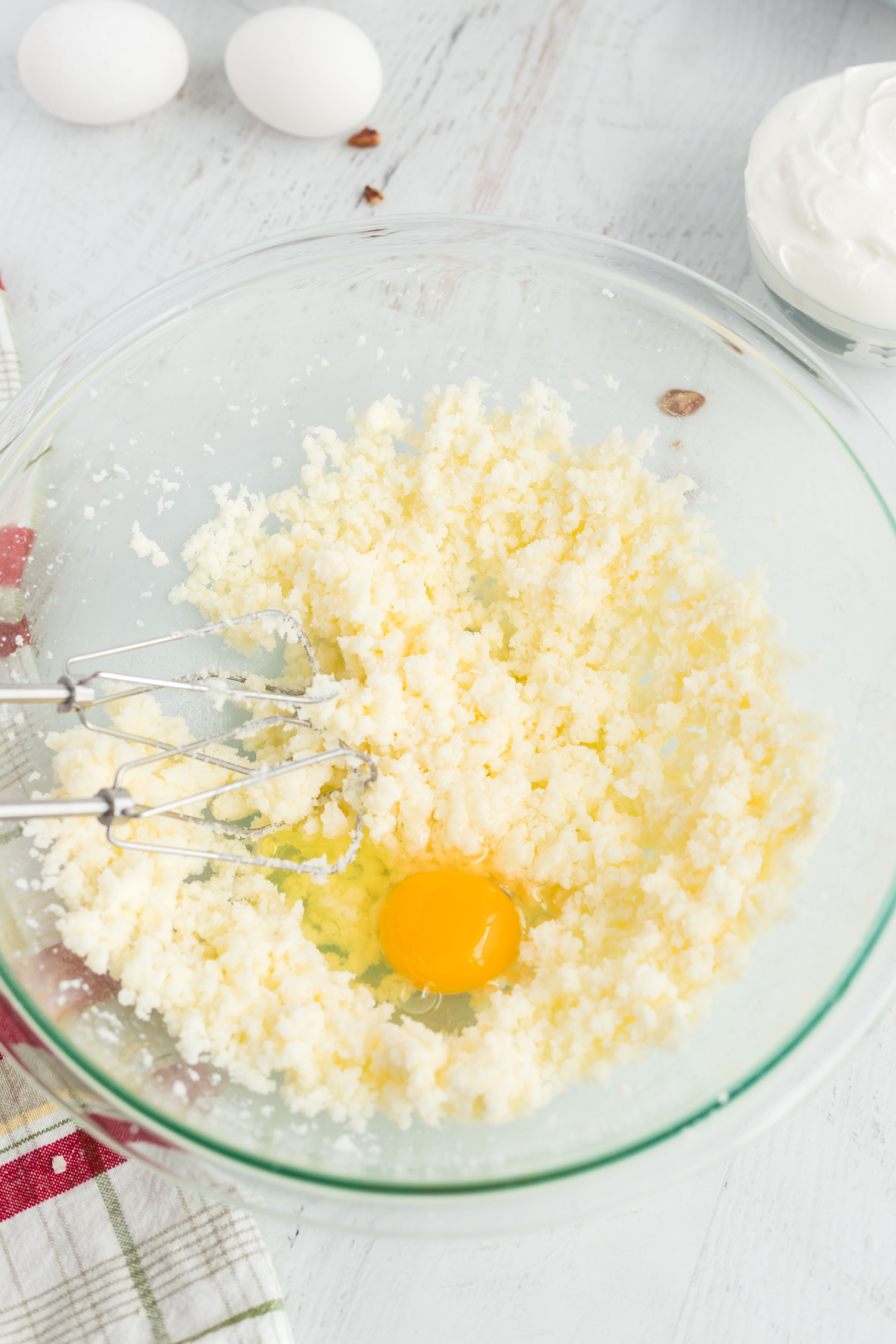 Place the room temperature butter and the remaining 1 1/3 cups of sugar in a large bowl and beat the ingredients with an electric mixer on medium speed until they are light and fluffy. Add the eggs to the batter one at a time, beating well after each addition of egg. Add the vanilla to the bowl and beat until well incorporated. 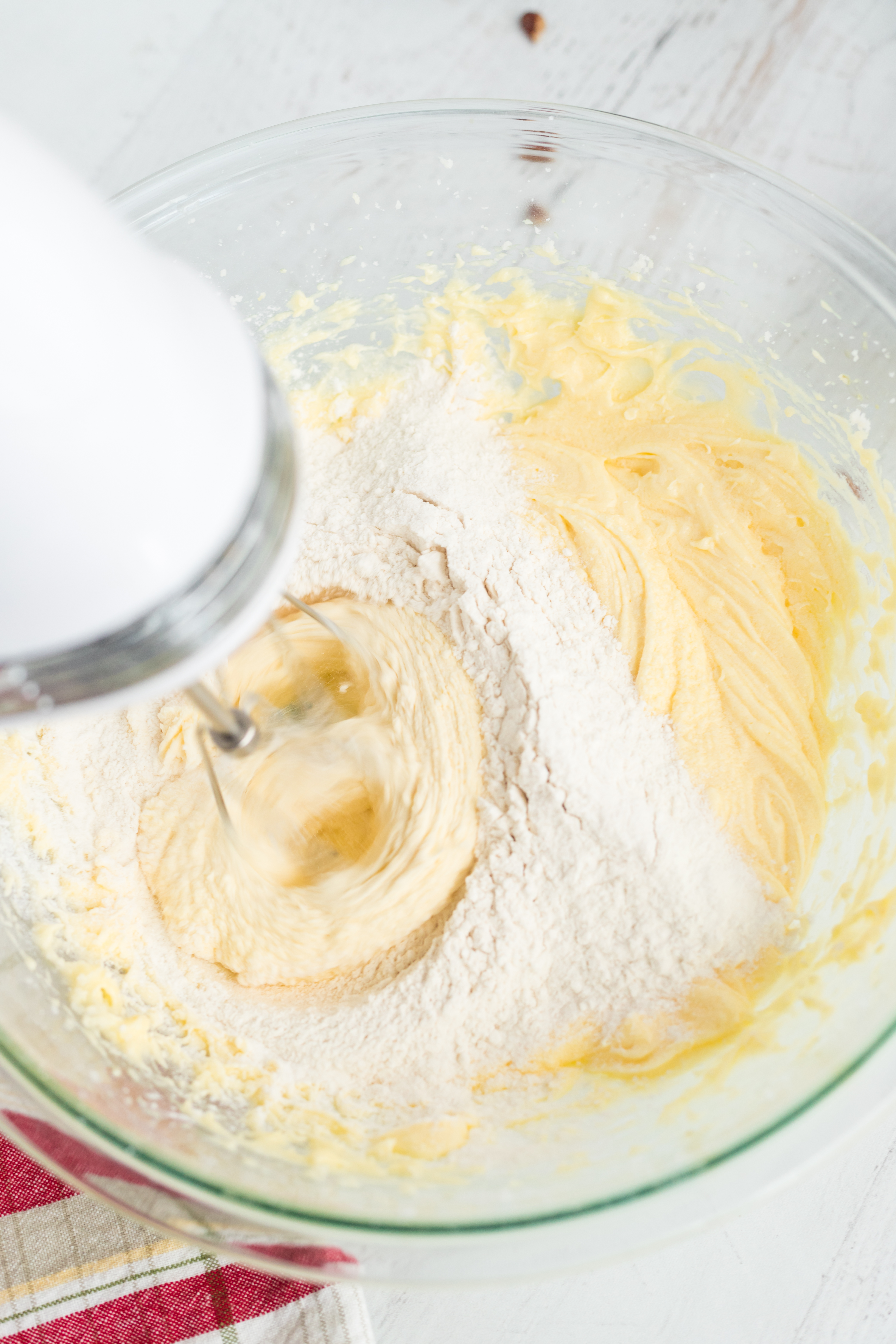 Place the dry ingredients (Flour, baking soda, baking powder and salt) into a large bowl and swirl the ingredients together with a fork to combine them.  We are ready to add the flour and sour cream to the wet ingredients ,alternately. If you’ve never done this before it’s just a matter of adding the flour mixture to the batter alternately with the sour cream. We always start with the addition of flour and end with the addition of flour. 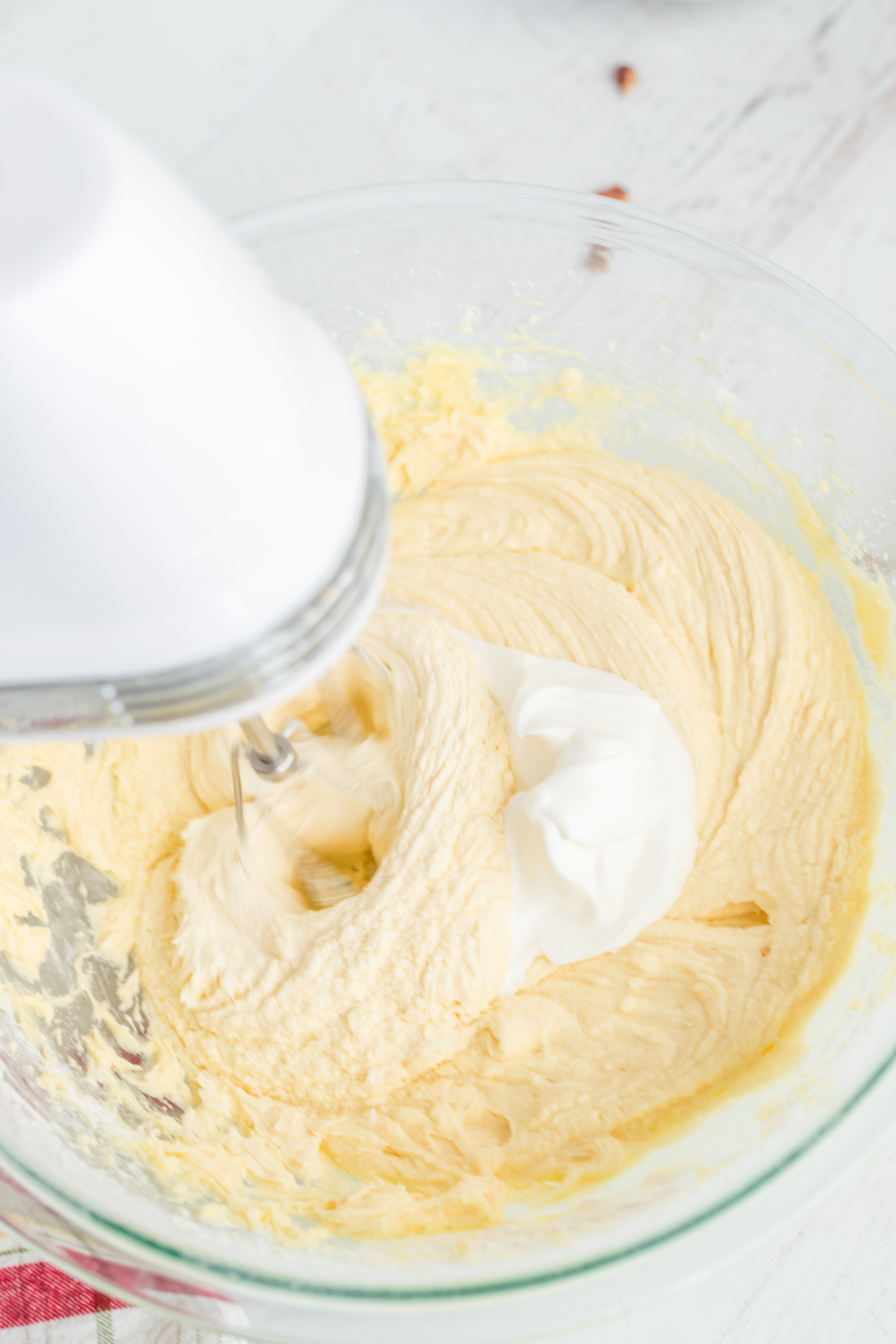 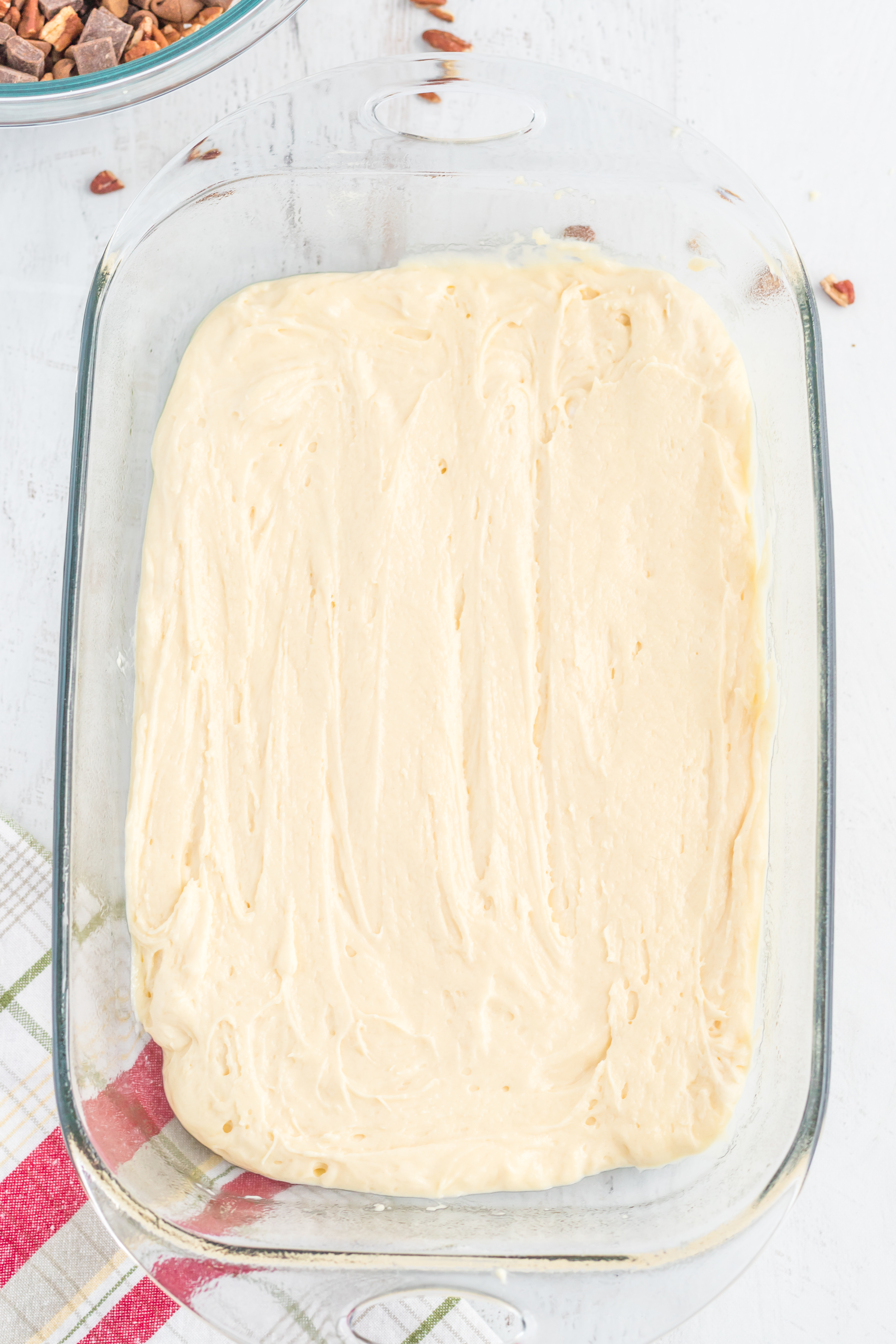 Place half of your gorgeous homemade sour cream batter into a greased 13×9 inch baking pan, spreading it to the edges of the pan. 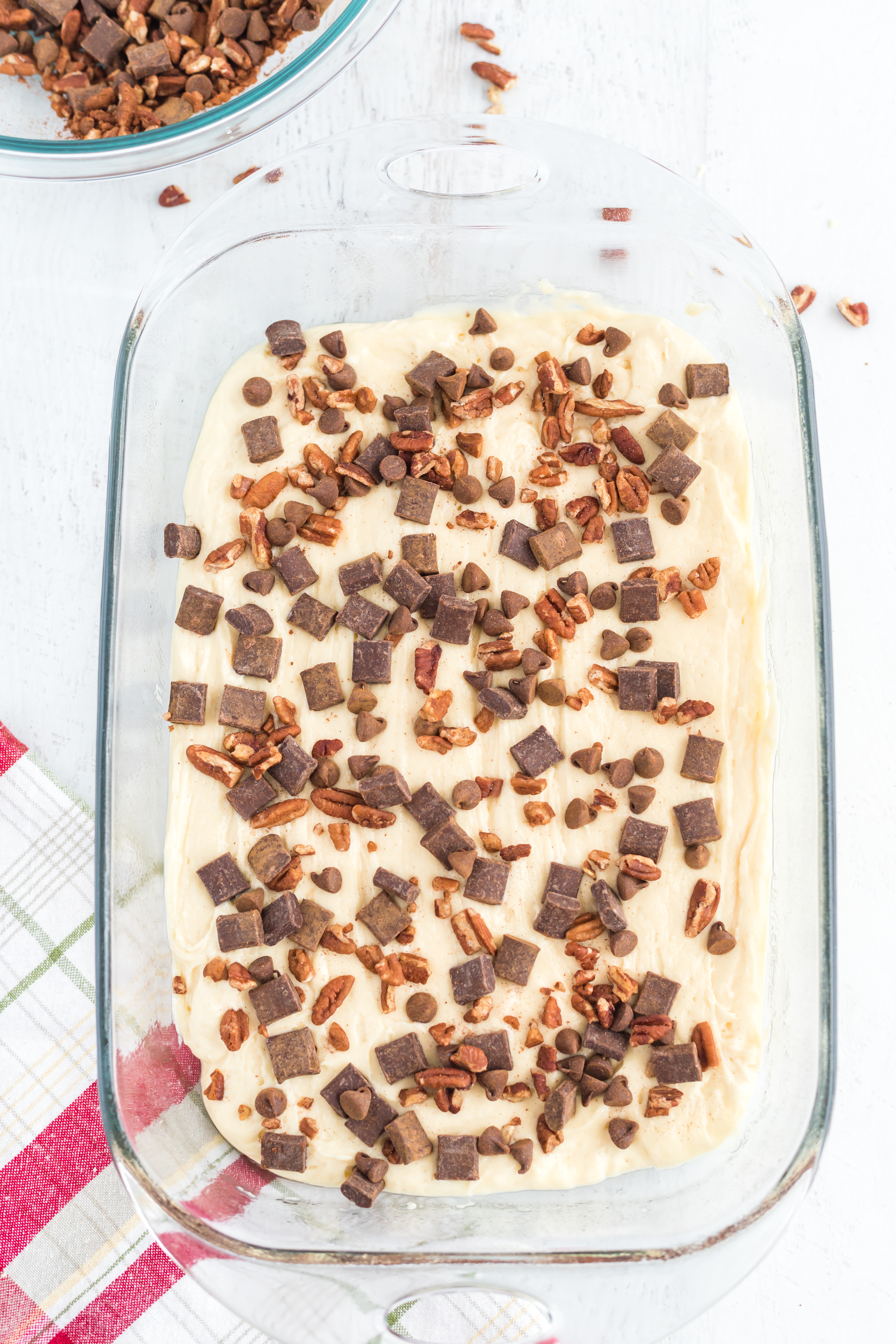 Grab the topping ingredients we’ve already mixed together and sprinkle half of it over the top of the batter evenly. 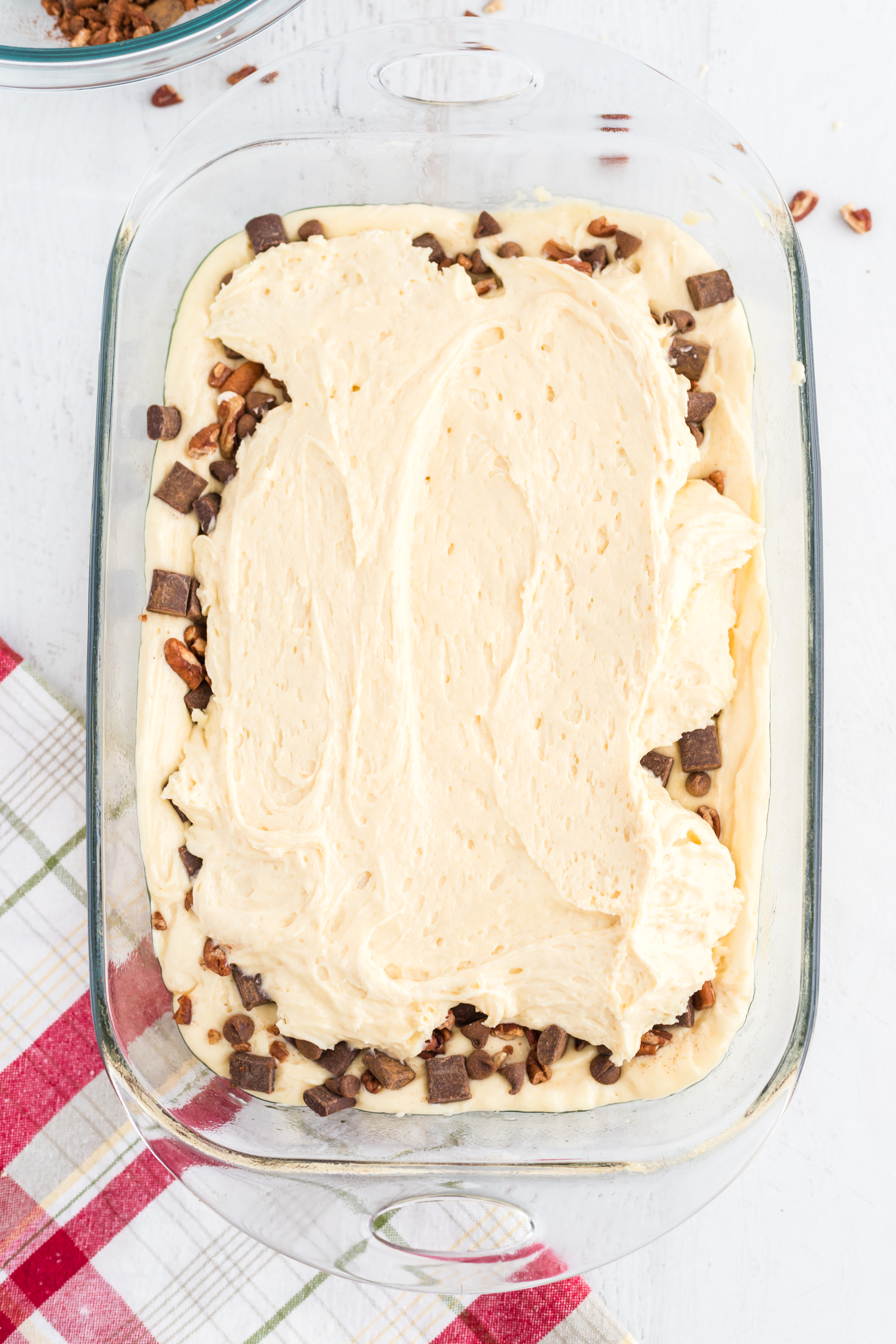 Spread the remaining cake batter over top of the topping you just sprinkled. Spread the batter to the edges of the pan to cover the topping. 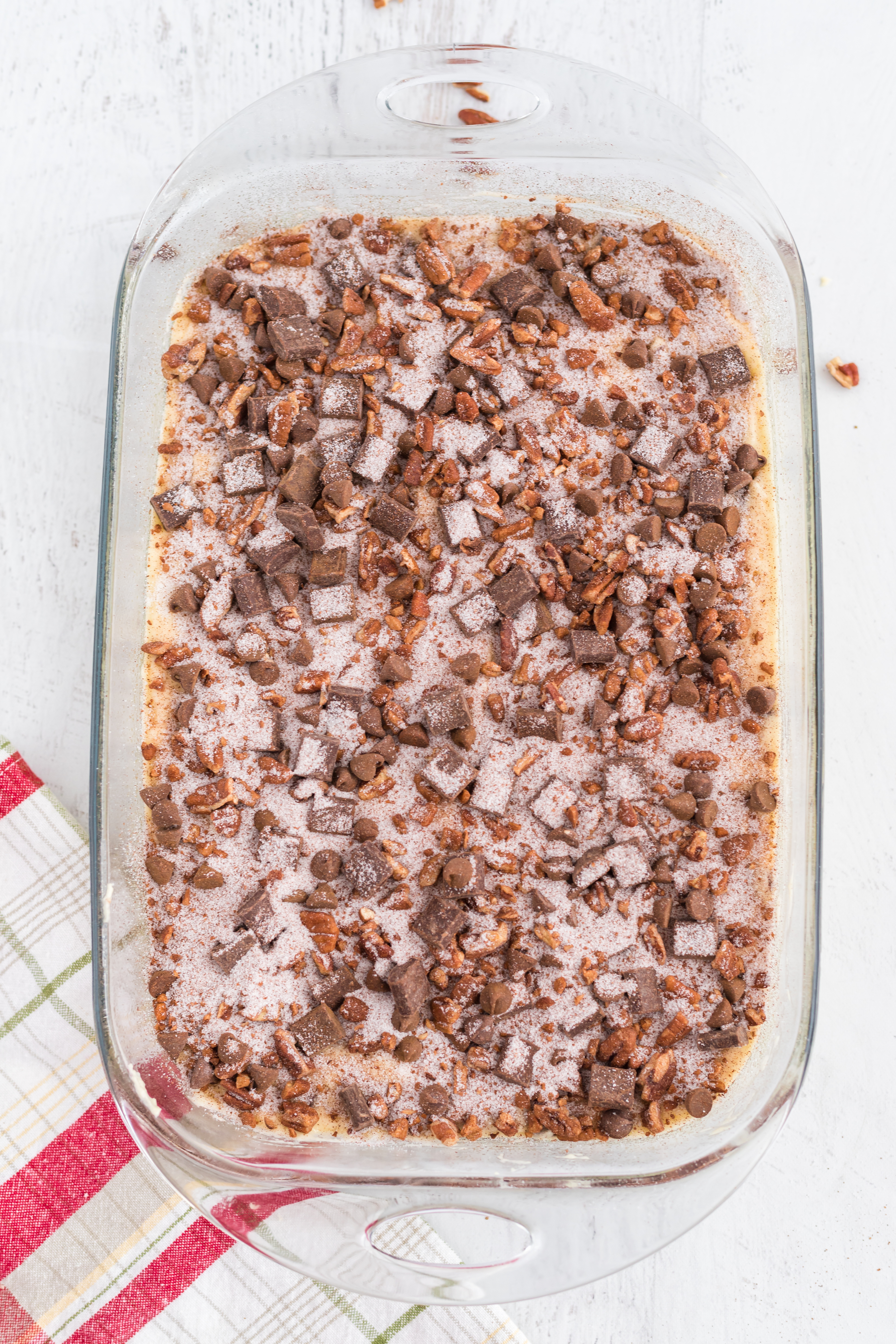 Sprinkle the remaining topping over the batter making sure the whole surface gets covered.  Bake the cake in a 350 degree oven for 40 – 45 minutes or until a toothpick inserted in the center comes out clean. Cool the cake completely before cutting it, it’s tough to wait, but let it cool. 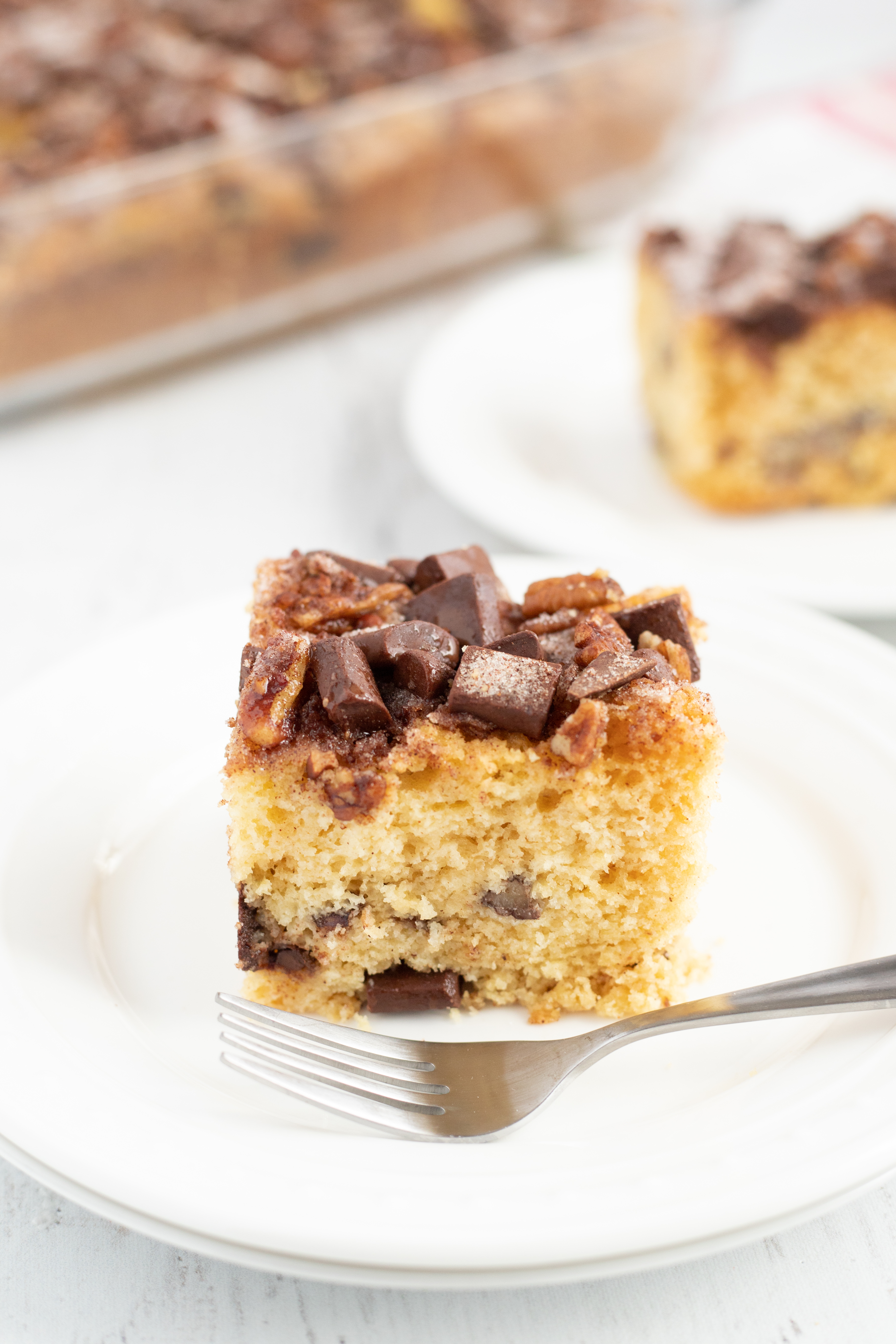 Chocolate Chip Cinnamon Pecan Coffee Cake, it has it all honey. A soft ,moist ,homemade sour cream cake topped  and stuffed with CHOCOLATE, CINNAMON  PECANS! This is drool worthy sweethearts and it’s “What’s For Dessert?” ENJOY! 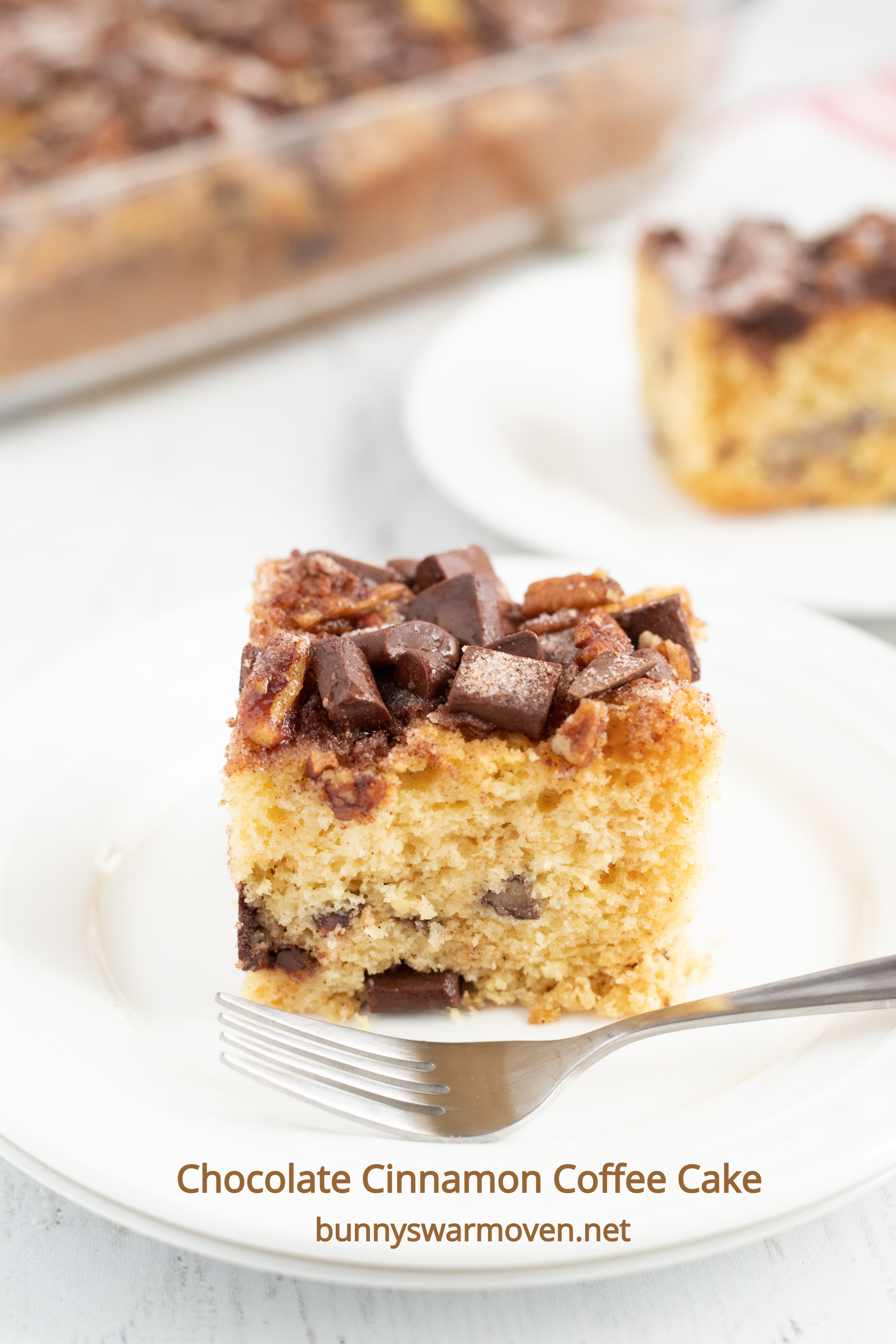 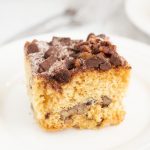 I wish I had a piece of this with my coffee this morning. Love the flavors. I am picturing the thick fluffy batter and want to eat a spoon raw..lol.

Oh it was so good!! You’d love it Jersey Girl!