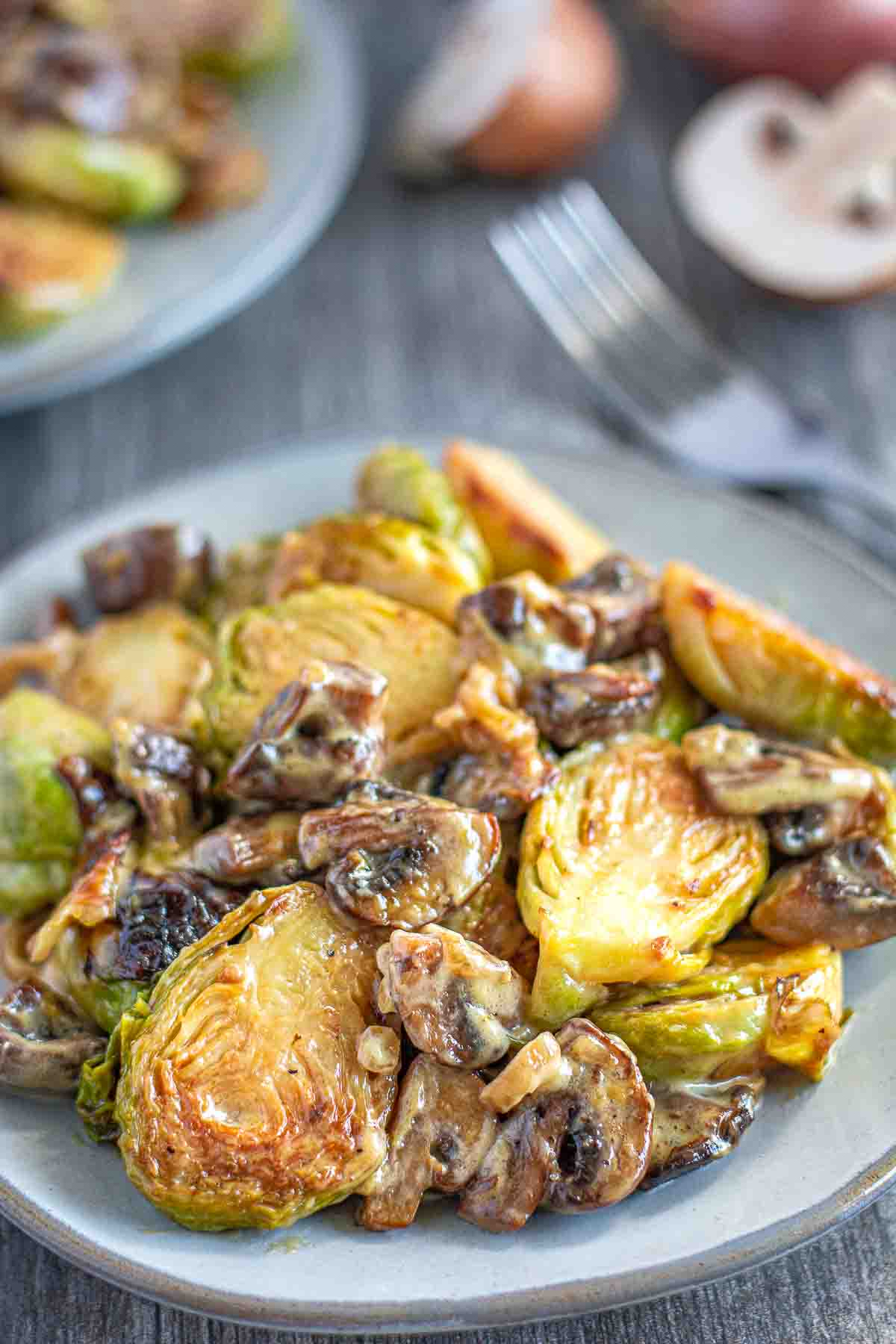 The first time I made this delicious recipe for Roasted Brussels Sprouts it reminded me of a stir fry. Why a stir fry? Because the vegetables in the recipe are cooked separately then combined to create the finally product. Now that’s not to say that it’s a time consuming recipe, prep or cook wise, it’s just the first thing that came to my mind.

I can’t tell you how happy I was with the end result of this recipe. These are Brussels Sprouts cooked like you’ve never had them before. From roasting the sprouts until they are golden brown giving them an amazing flavor all by themselves ,to sautéing the mushrooms and shallots in butter and oil ,this recipe is delicious. And that’s not even the end of the flavor in the recipe! The vegetables are topped with a combination of chicken broth (you can use white wine if you prefer) and CREAM!  Let’s gather the ingredients and make it together. 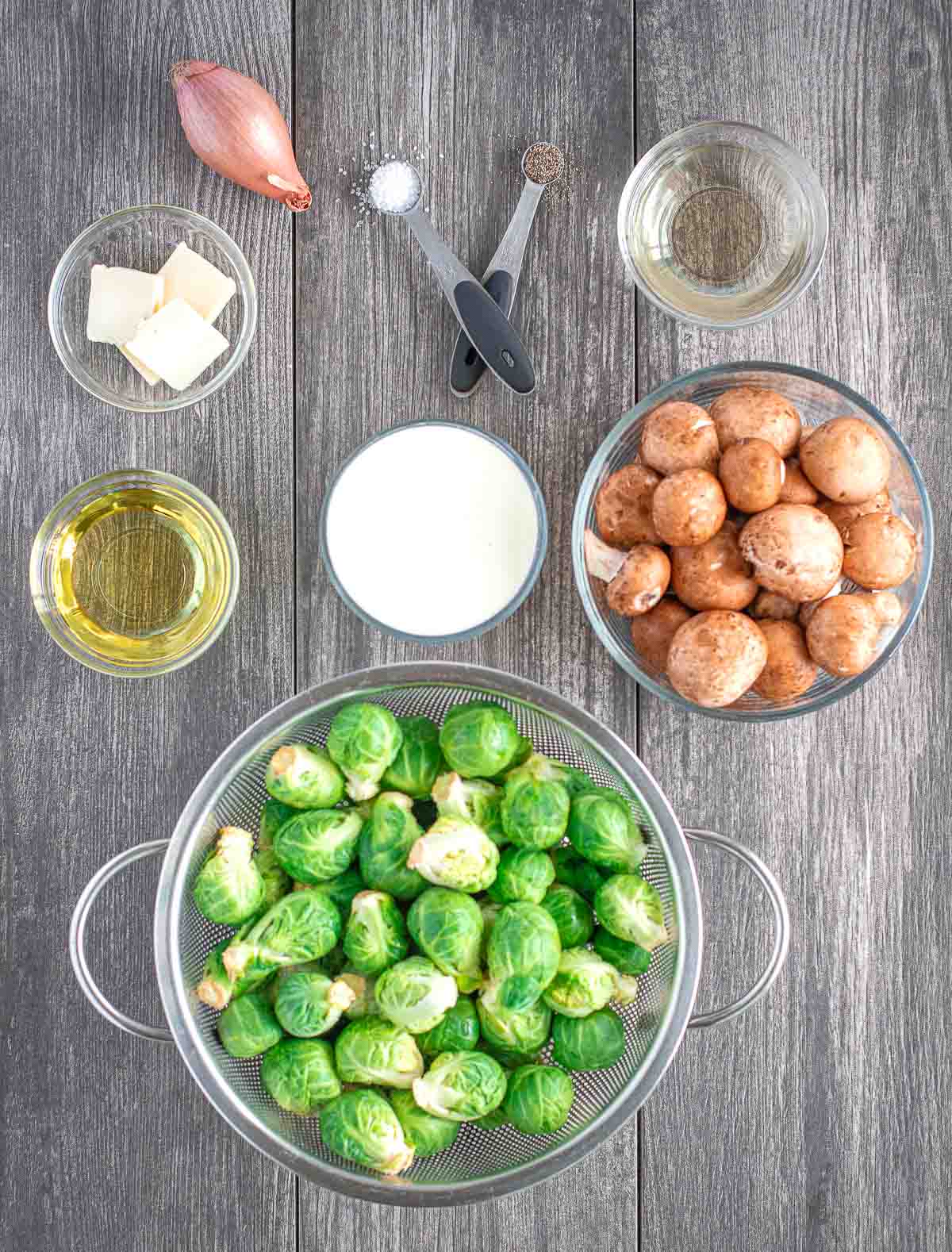 To start the recipe position one of your oven racks in the center of the oven and preheat the oven to 450 degrees.  Place 5 cups of trimmed and cut in half Brussels Sprouts on a rimmed cookie sheet. Drizzle the sprouts with 3 Tablespoons olive oil, toss to coat them with the oil.  Spread the Brussel Sprouts out into an even layer on the baking sheet, season them with salt. Roast the Brussels sprouts until they are tender and browned, about 25 minutes. Remove the pan from the oven and set it aside.

Heat a 12 inch skillet over high heat. When the pan is hot, add one tablespoon olive oil and two tablespoons of butter to the pan. When the butter melts, add the mushrooms to the pan in a single layer. Cook the mushrooms and occasionally stir them in the pan until they are tender and golden brown, about 10 minutes. Season them to taste with salt and remove them from the pan to a plate.

Using the same skillet you cooked the mushrooms in add the remaining 1 Tablespoon of olive oil and one Tablespoon of butter.  When the butter has melted , add the sliced shallots to the pan.  Cook and stir the shallots in the pan until they are tender and golden about 5 minutes. Add the chicken broth (or wine if you are using it) to the pan. Cook until the chicken broth is reduced by half in the pan. Place the mushrooms and the Brussel Sprouts back into the pan. Add the cream to the pan and black pepper to your taste. Continue to cook and stir occasionally until the cream thickens and coats the vegetables, about 5 minutes. Season with salt and pepper and serve your delicious side dish. 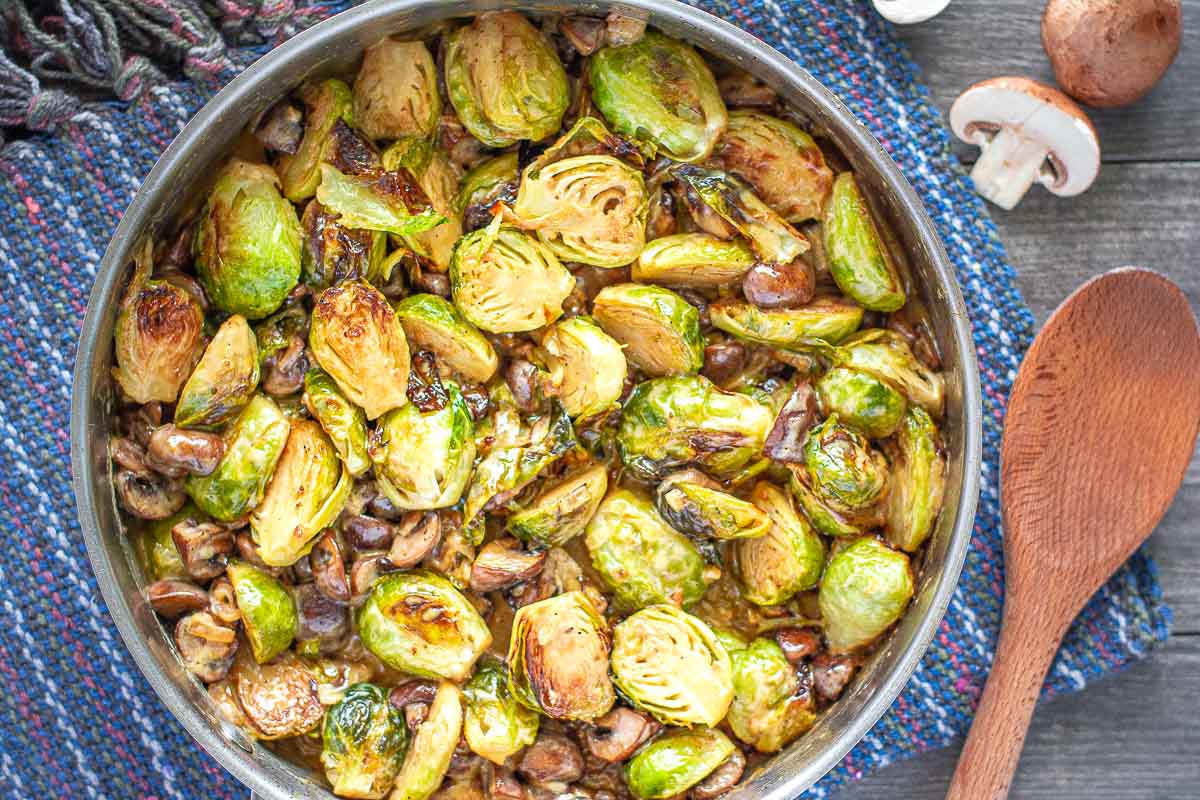 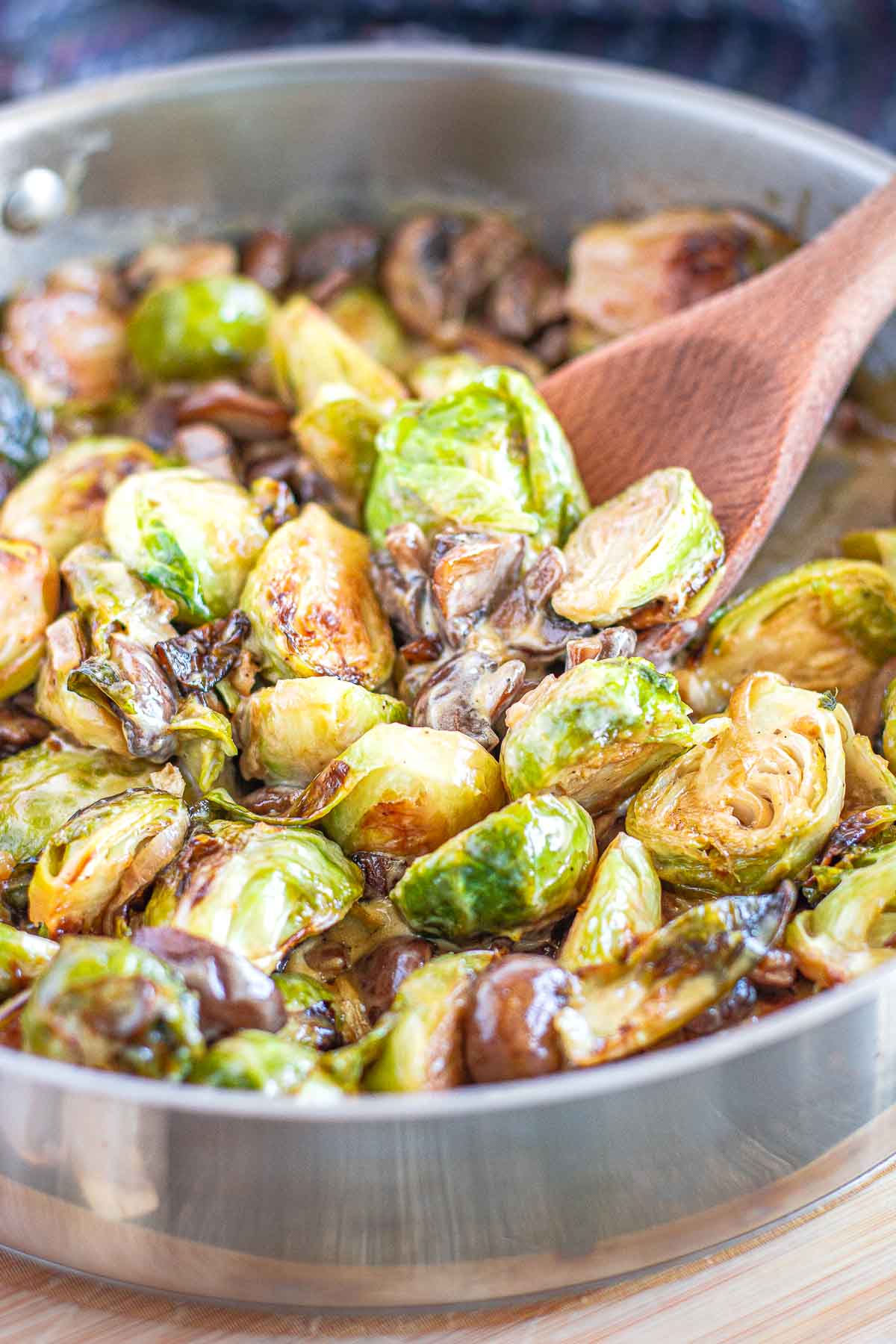 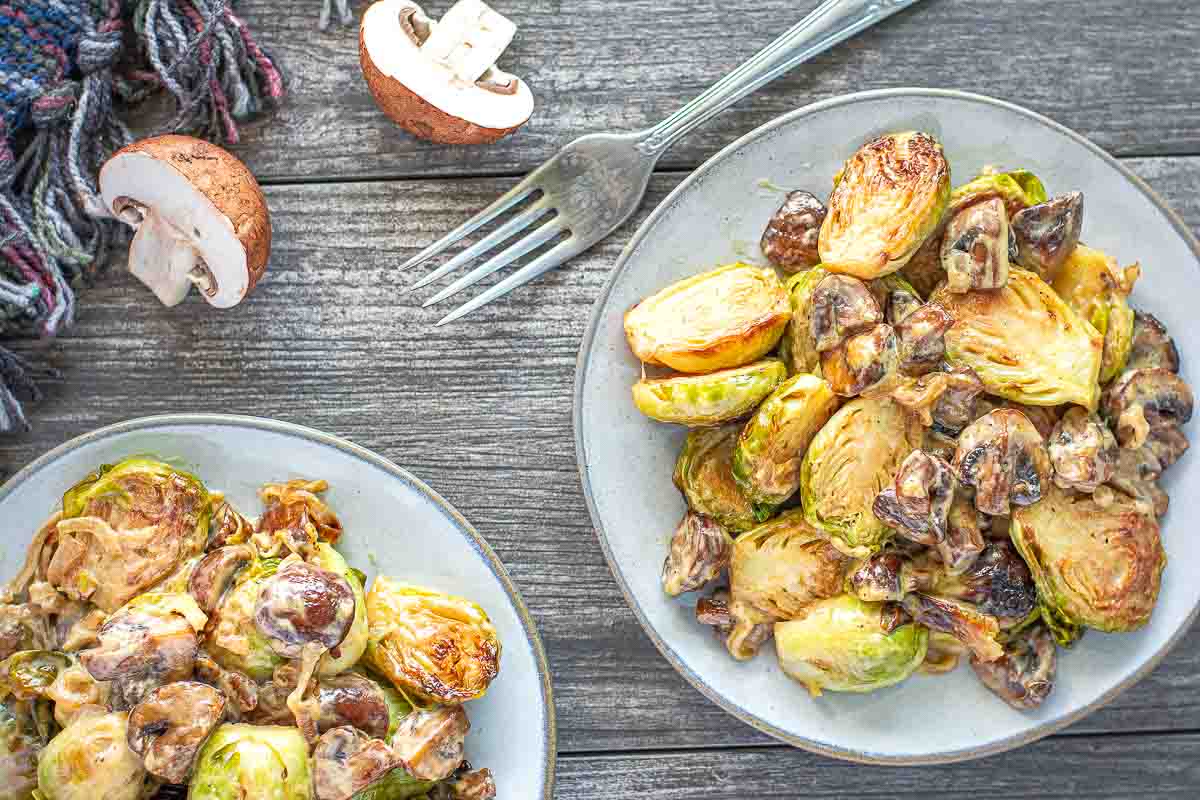 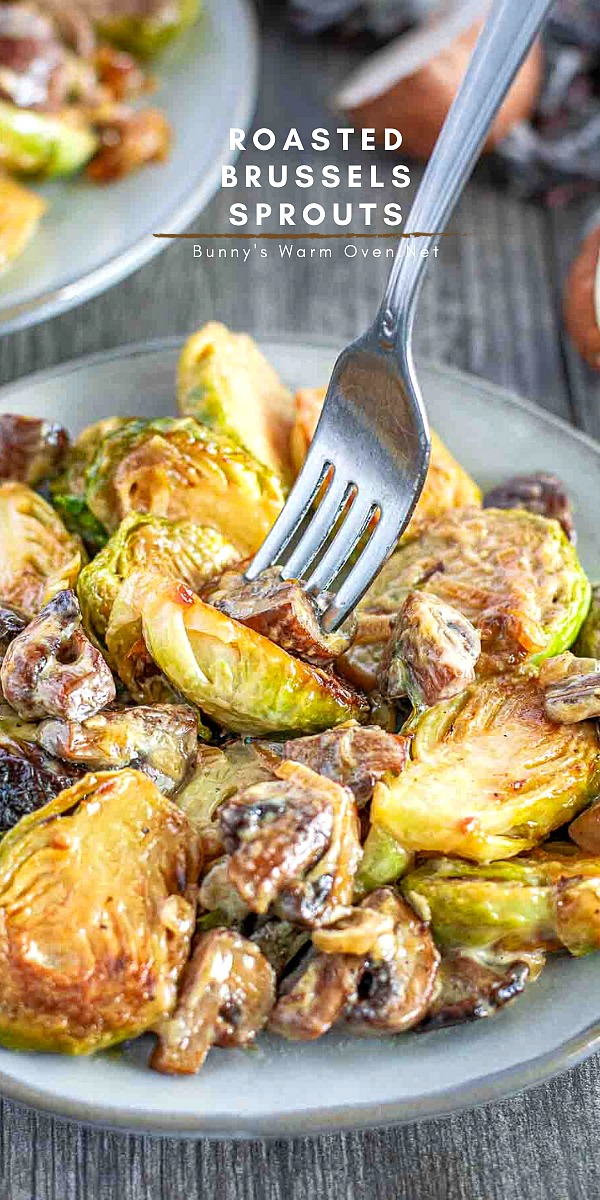 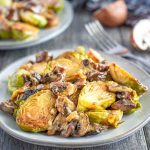