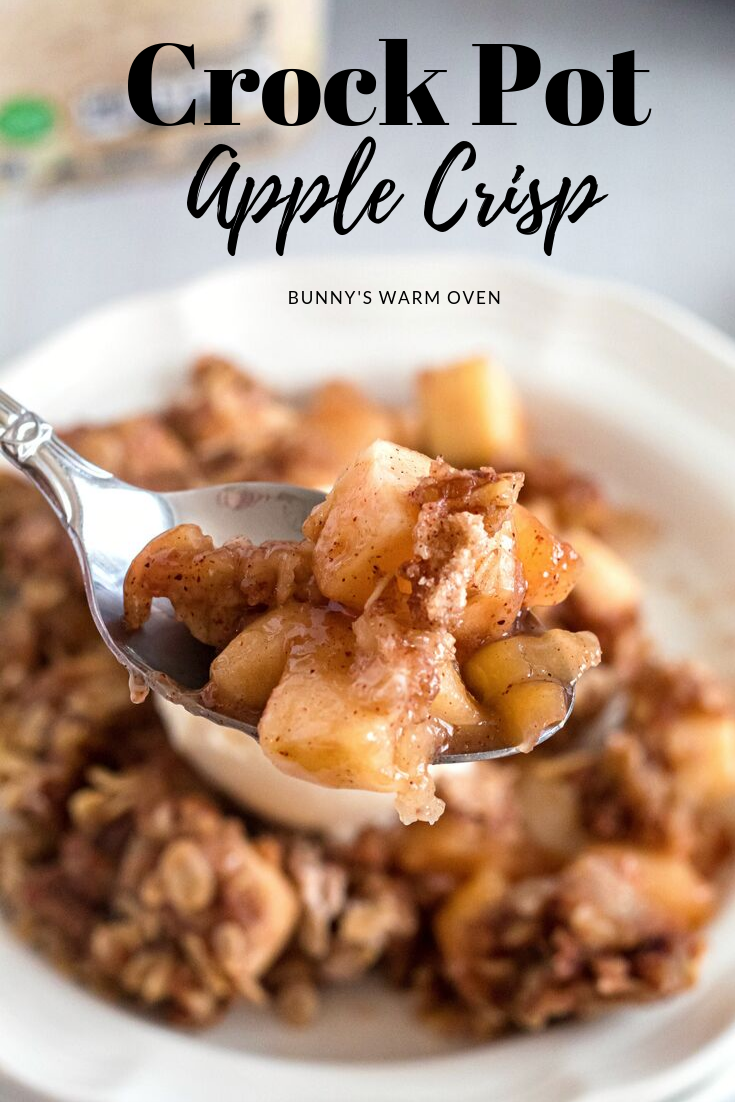 I made this out of curiosity. What would Crock Pot Apple Crisp be like? 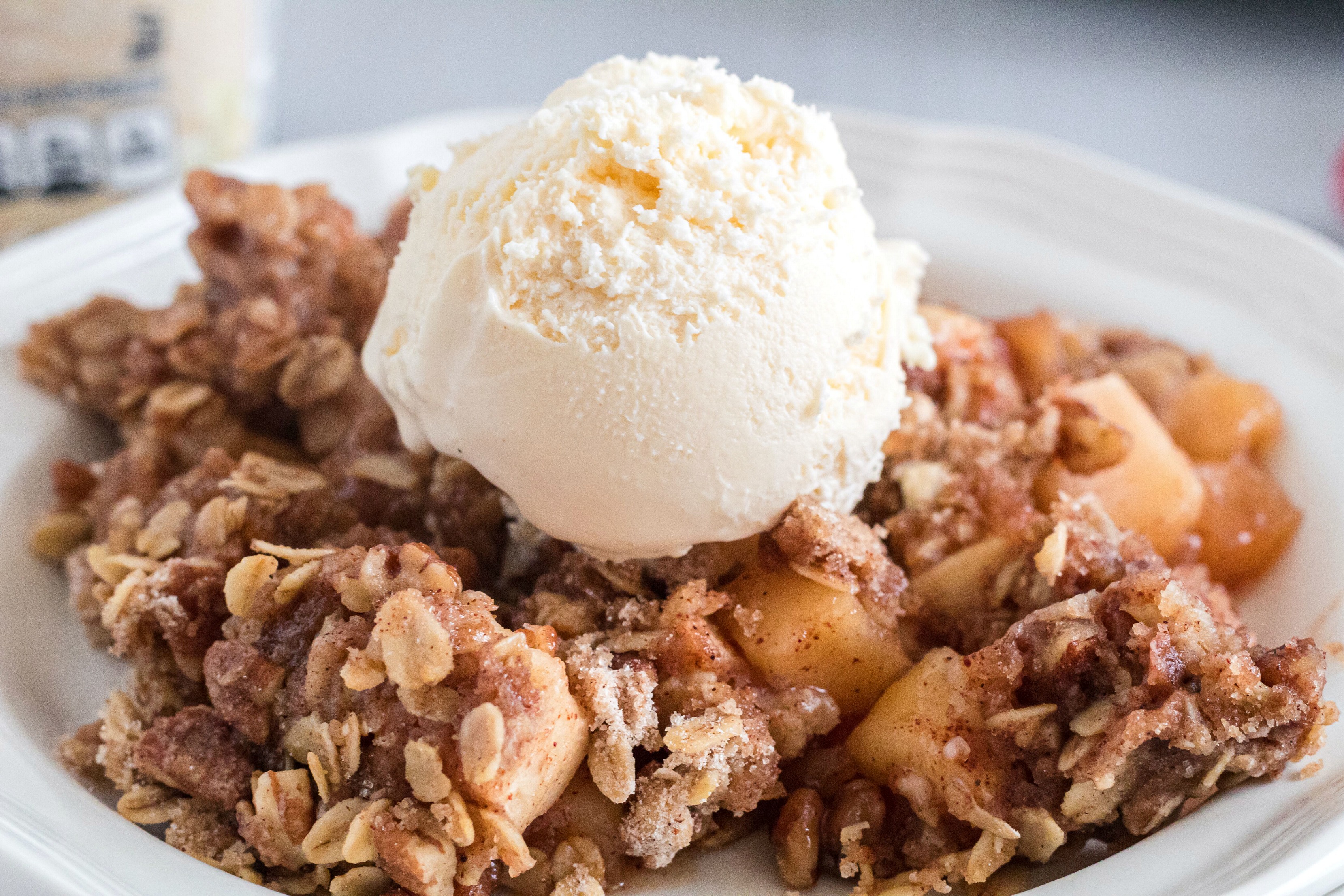 I ended up loving it! It was so good that I couldn’t keep my spoon out of the crock pot after it was made. I ate so much I wasn’t hungry for dinner. When my husband tasted it he said….This is real food!  He liked the fact that there were apples, pecans and oatmeal in it.  It wasn’t a dessert to him, it was real food. 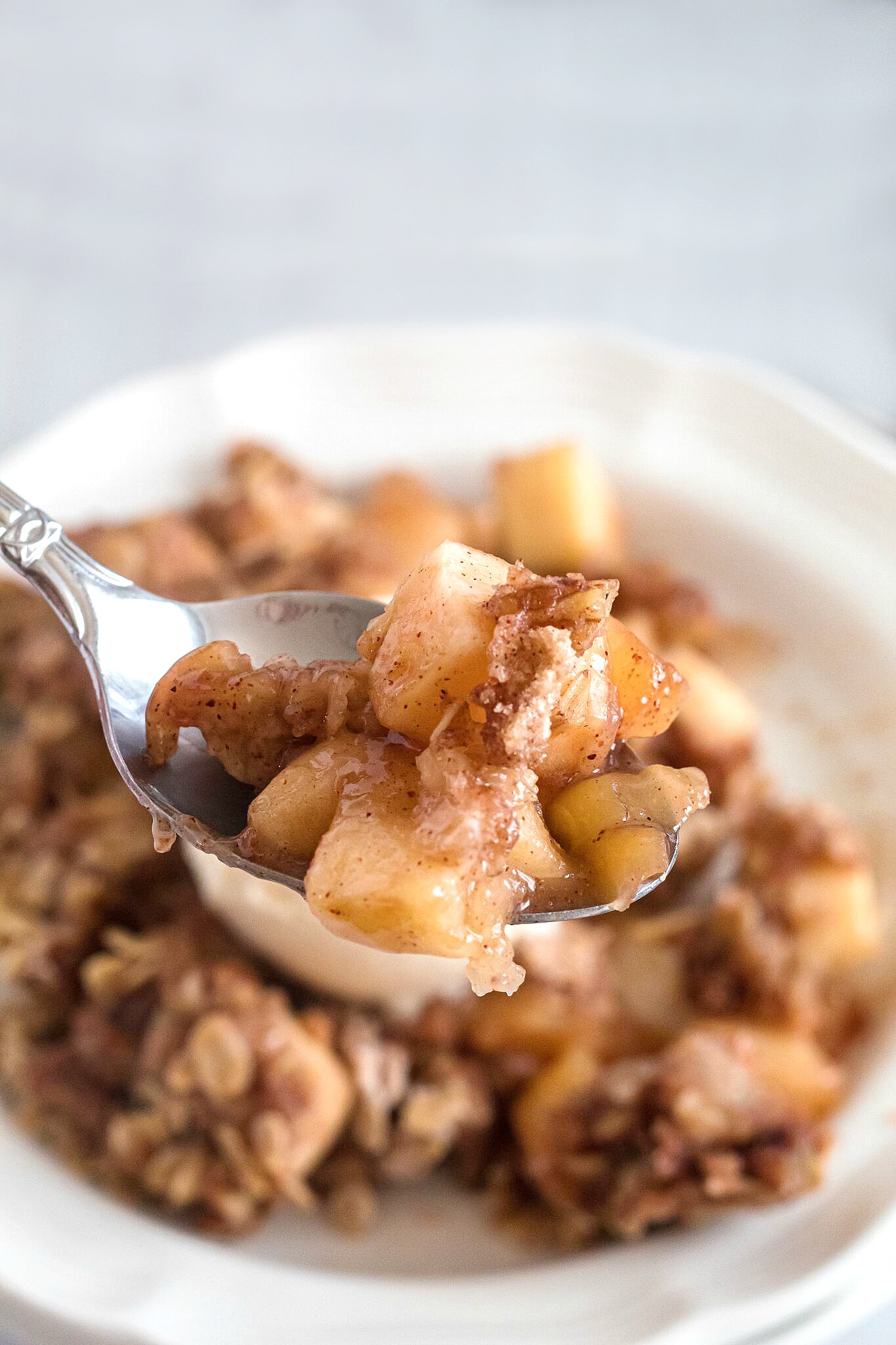 Why make Apple Crisp in the crock pot instead of in the oven?  There are occasions when this version of apple crisp might suit your needs and tastes better than baked .  This would be great to take to pot lucks, office parties or camping.  Make it in the crock pot, take the crock pot with you and plug it in when you get to where your going and you have warm absolutely delicious Apple Crisp. We’re going to make this incredible apple treat together so let’s gather the ingredients. 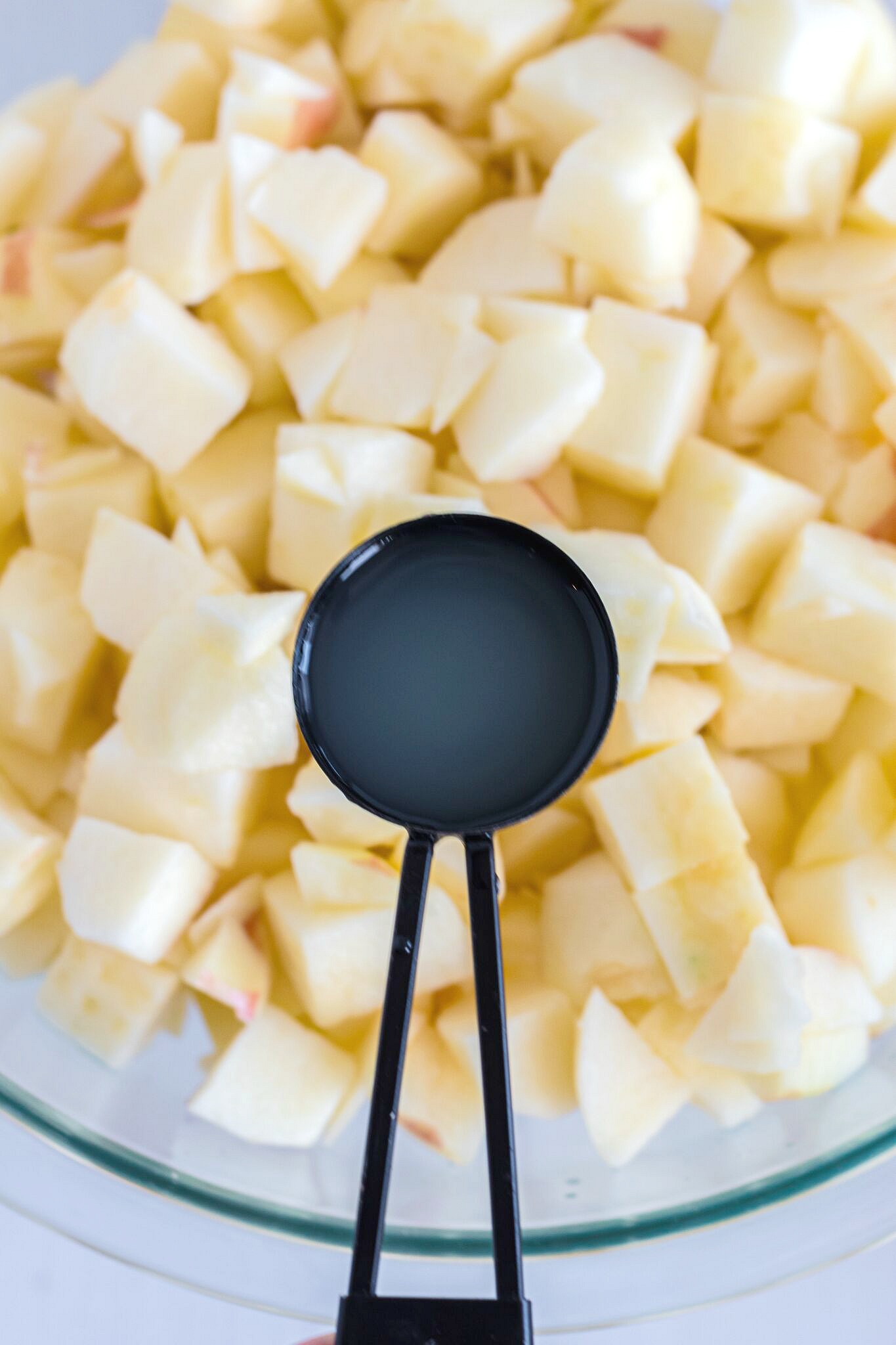 We start the recipe by peeling 8 Gala baking apples ( or the baking apple of your choice) and cutting them into chunks.  Toss the apple chunks with 2 Tablespoons of lemon juice and place them inside the crock pot along with the vanilla extract. 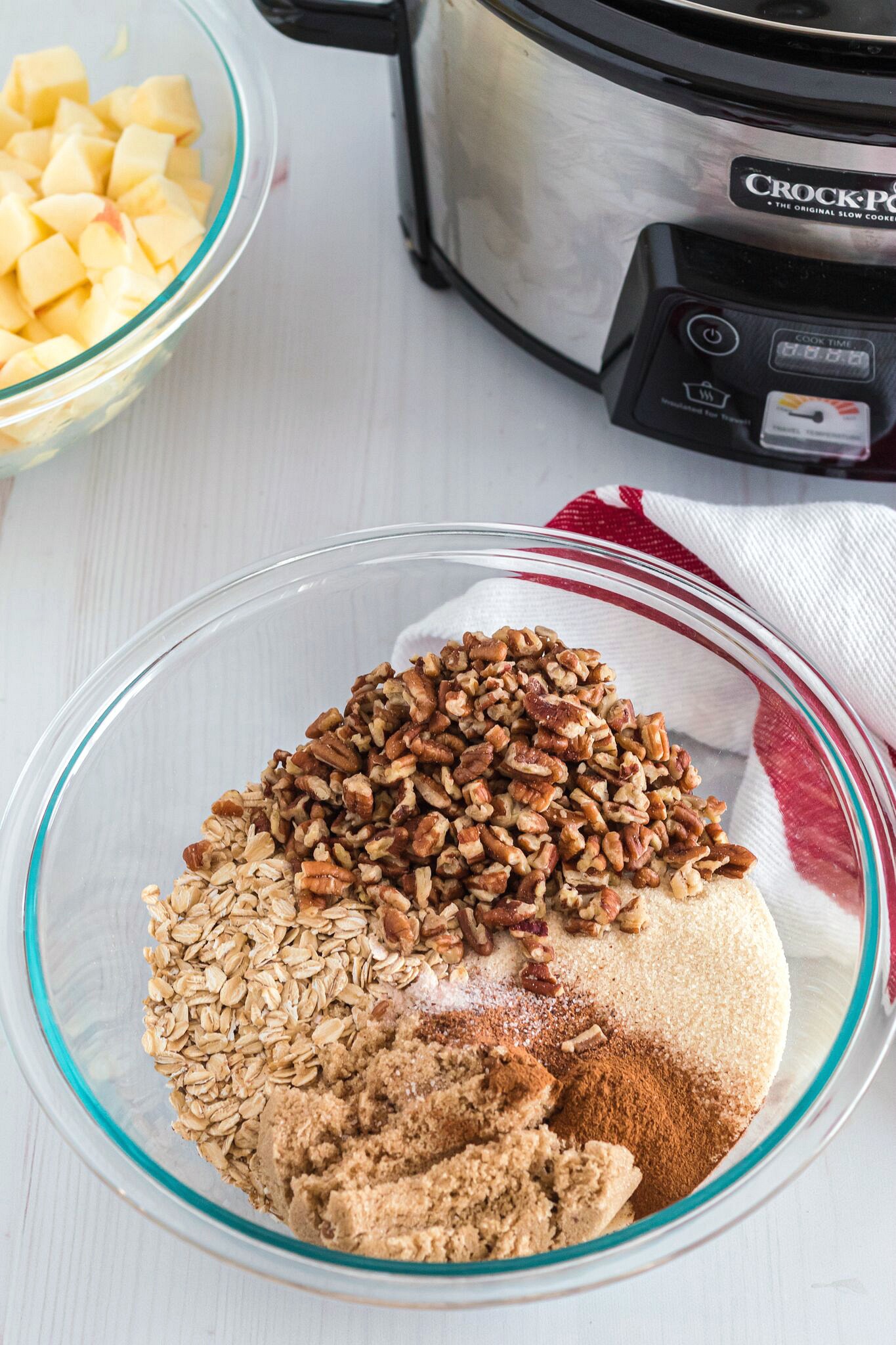 Place the flour, oatmeal, light brown sugar, white sugar, cinnamon and nutmeg together in a large bowl. Mix the ingredients together to combine them. Add the 1/2 cup cold butter pieces to the bowl and work them into the ingredients with a fork or your fingers until you have coarse crumbs. Set the mixture aside while we make the cornstarch mixture. 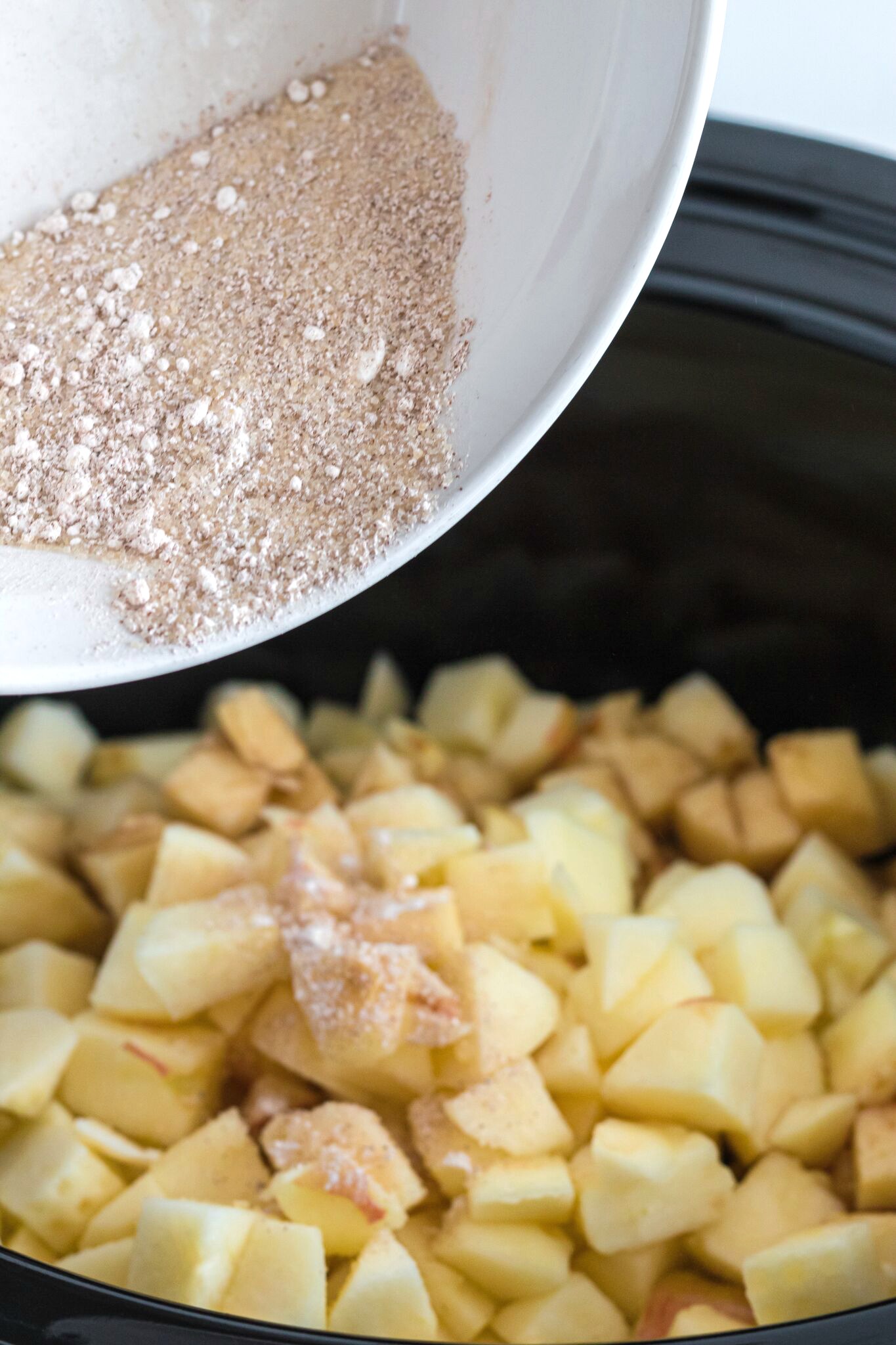 Place the white sugar, corn starch, nutmeg and cinnamon in a medium size bowl. Whisk the ingredients together.  Stir the cornstarch mixture into the chopped apples in the crock pot. 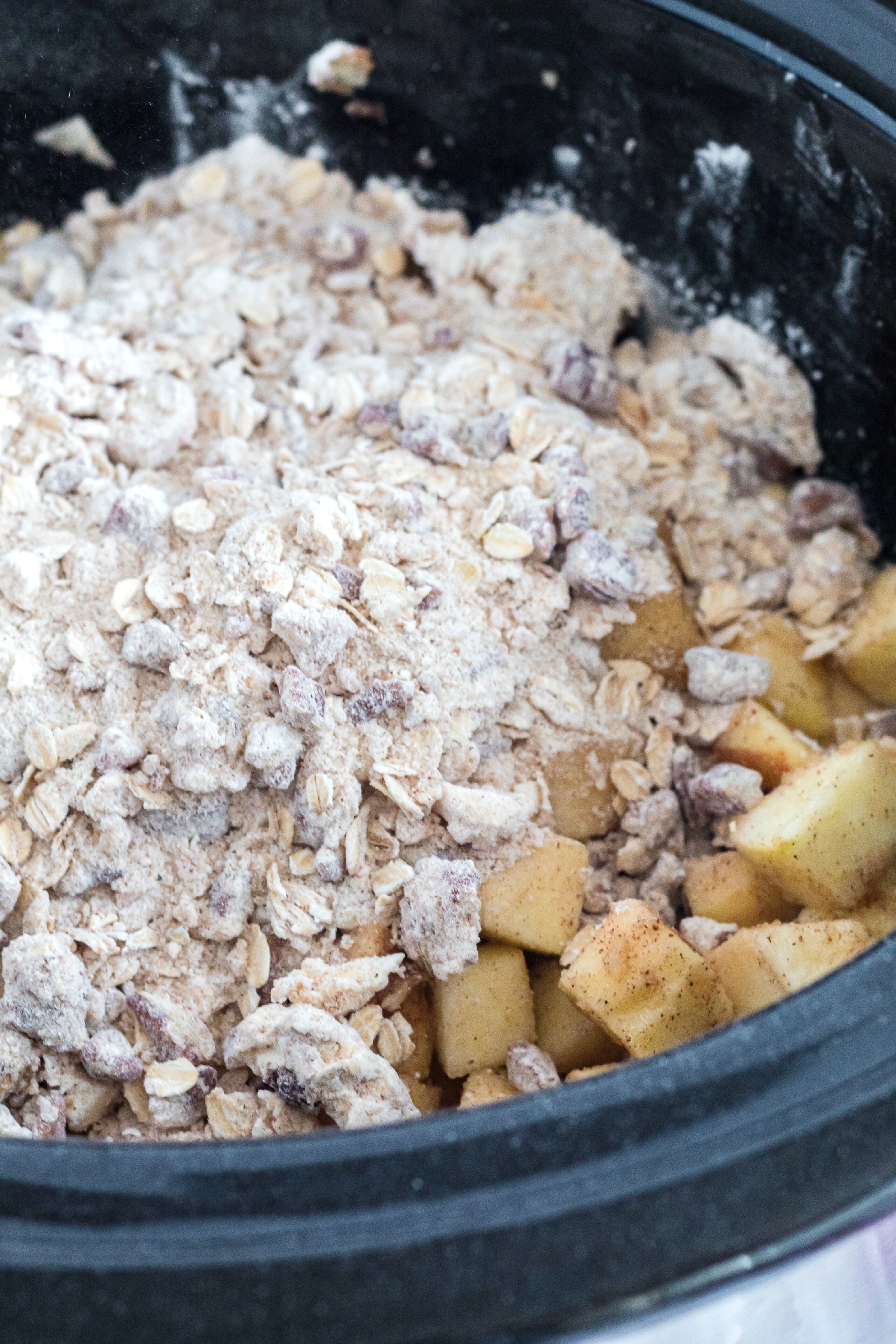 First, since it’s made in the crock pot, don’t expect a crisp top like you would if it was baked.  The oatmeal does get somewhat crisp, but again, not like it would be in the oven.  That said, you still need to make it!  It’s a whole other fantastic taste and texture than a traditional oven baked apple crisp!  Crock Pot Apple Crisp, it’s what’s for dessert and you’re going to love it!

Make sure to click here for Bunny’s favorite kitchen items!

Looking for more delicious recipes, sign up for RecipeLions Newsletter and get fantastic recipes delivered to your inbox! 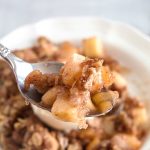 I’m going to have to try making this gluten free. Looks so good. Bring on the fall baking!

I made this for my girlfriends and we all love it,so good it is a keeper.

Marge thank you for coming back to tell me you loved it!!! You made my day!

How could I make this gluten free?

Sheila I haven’t made enough gluten free recipes to feel comfortable to tell you . BUT here’s a link from David Lebovitz’s blog that shares links for homemade gluten free flour and where to buy gluten free flour. I hope this helps! http://www.davidlebovitz.com/2013/05/gluten-free-baking-and-substitutions/

Love all of your recipes. Your cooking seems to be very similar to my own. Can’t believe I want to try all your recipes!! Thank you!

Thank you so much Barb!!! Thank you for your kind words!

Question: Can I leave out the brown sugar and add more white? I want this in my mouth and don’t feel like going to the store.

Yes Landyn, sub the white sugar, actually with this recipe you can pretty much control the amount of sugar you put in it. Taste the apples after they have cooked and just adjust the sugar the way you like it.

Bunny, I don’t normally write on blogs but I have to write and tell you that you are always the first one of my recipe blogs that I look at…….I so enjoy your column and recipes…..my husband and I have grown kids and grand kids and great grand kids and I so enjoy cooking for them since the adults are all working full time and I have the time to do it….this looks delicious and will be trying it out this fall for sure…………..thanks so much for posting so many wonderful recipes….

Pat you put such a big smile on my face and warmed my heart, thank you for your kind words. My goodness don’t we live to make our babies and they’re babies happy. And we love doing it with food! It’s like if their bellies are full and they have a smile on their faces we’re happy grandma’s. Thank you so much for taking the time to come visit and comment, I appreciate it more than you know.

My family Loved this! I’m not a huge nutmeg fan so I used pumpkin pie spice instead and it was scrumptious. Thank you so much for sharing this!

Your welcome Amy, I loved it too!