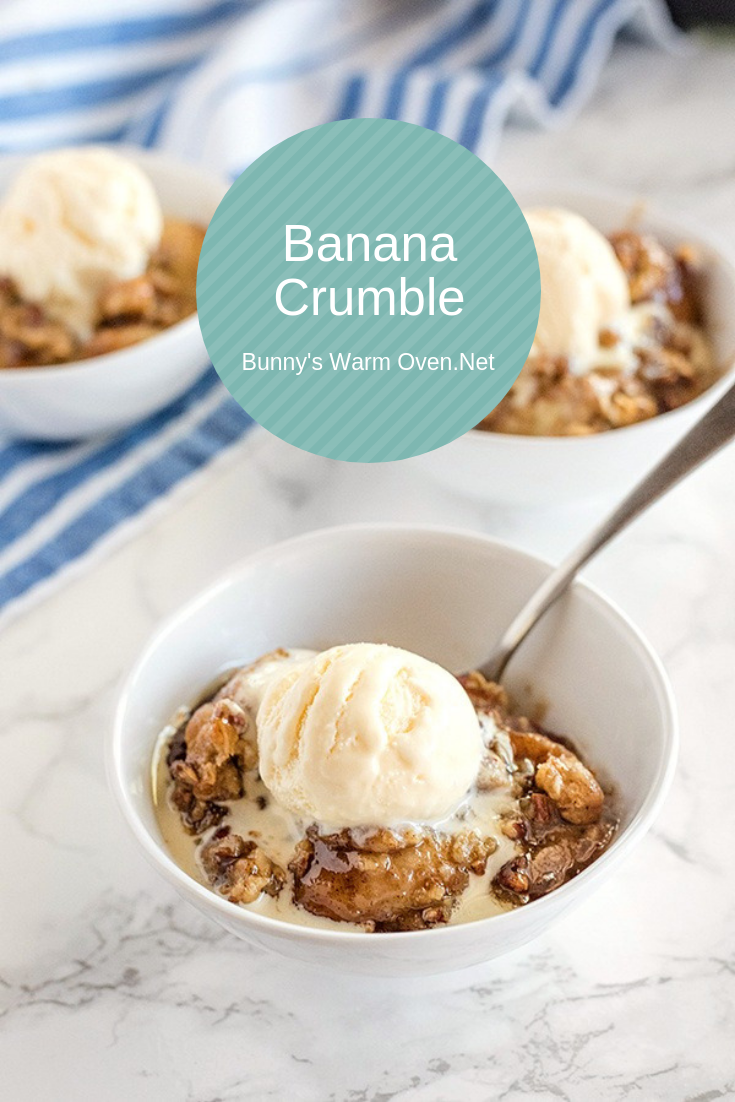 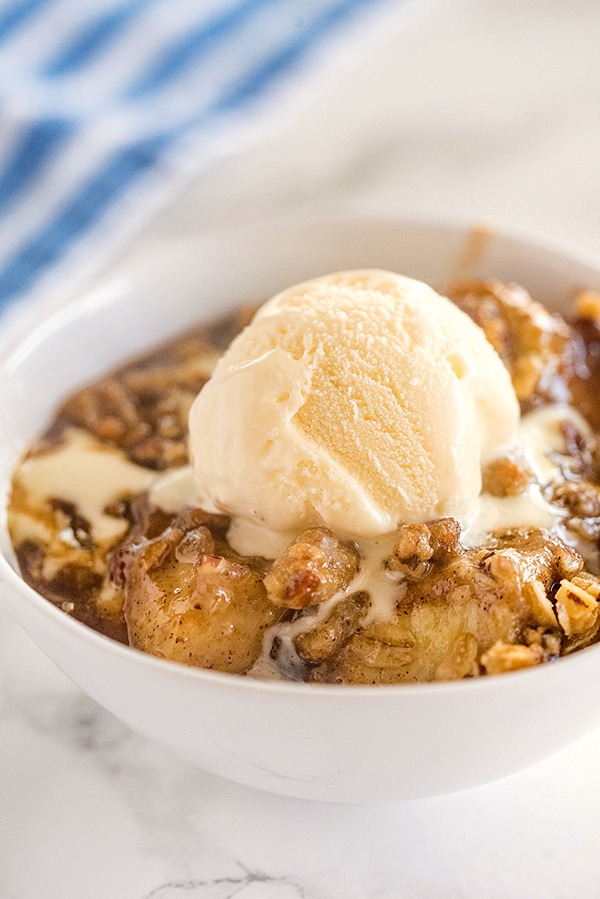 Have you ever wondered why you see crumble recipes for berries, pears, apples…just about any fruit but bananas?  We generally just don’t think about bananas when we think about fruit desserts like, crisps or crumbles. I wonder if it’s because we don’t think they would hold up to being baked?

Well, I can tell you first hand after making this Banana Crumble that they can and did hold up very well. I think the ripeness of the bananas being used has a lot to do with that.

We’re used to using very ripe bananas for baking, the blacker the better as a matter of fact.  When you make a Banana Crumble, you want the banana to be ripe as far as being a nice bright yellow without any green on it or any signs of starting to over ripen. That’s the perfect banana for this recipe.  Now, let’s gather the ingredients and make Banana Crumble together. 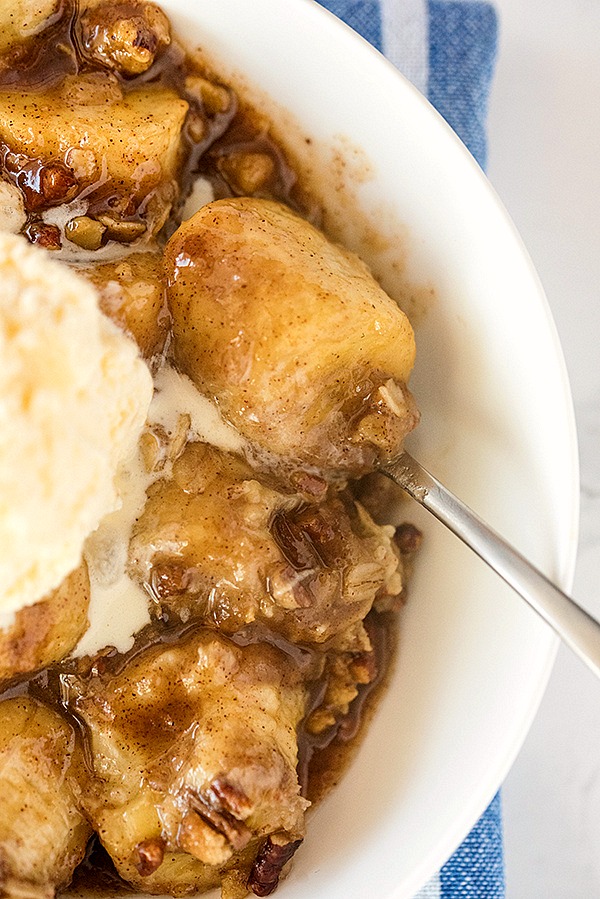 The recipe came together very quickly, the topping is made first and refrigerated. To make the topping place the light or dark brown sugar, old fashioned oats, all purpose flour and butter in a medium size bowl.  Work the ingredients together with your fingers until they become crumbly. Add the toasted pecans to the bowl and stir to mix them into the other ingredients. Refrigerate the topping while we make the filling.

Melt two Tablespoons of butter over low heat in a 10 inch cast iron skillet or an oven safe skillet. Add the brown sugar and stir until it dissolves, about 3 minutes. The ingredients together will look like a wet mass of sugar that slides around the pan. Stir in the cinnamon and salt. Add the orange juice carefully, it will sizzle up and splatter a little bit. Cook the mixture about one minute until it thickens slightly.  Add the banana chunks to the skillet and toss them gently until they are well coated.

Let me just say here that I was excited to make this crumble, that excitement went up about ten notches when I was cooking the butter/brown sugar, cinnamon mixture.  The moment I poured the orange juice in the pan it danced around and released an amazing aroma, all I could think of was…I want to know what that wonderful scent tastes like. 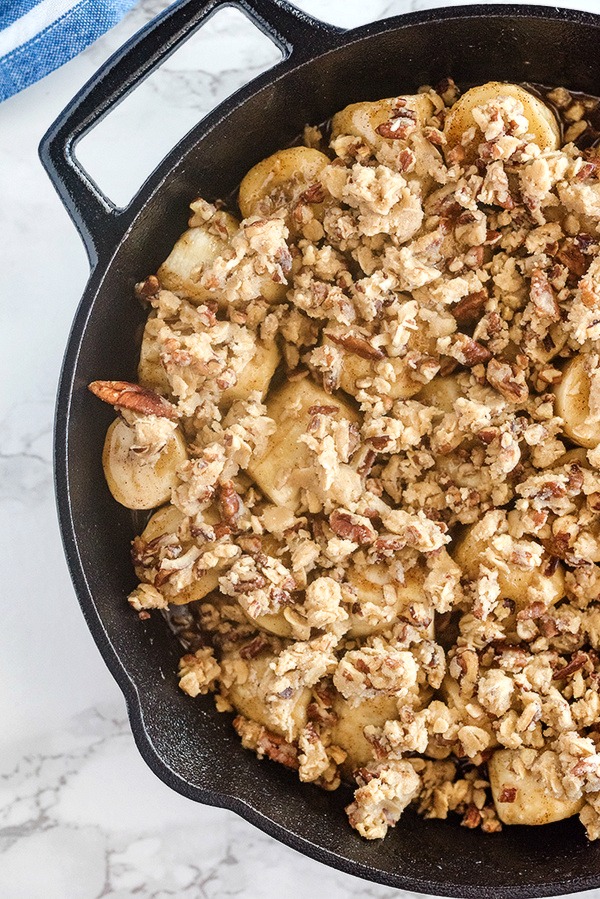 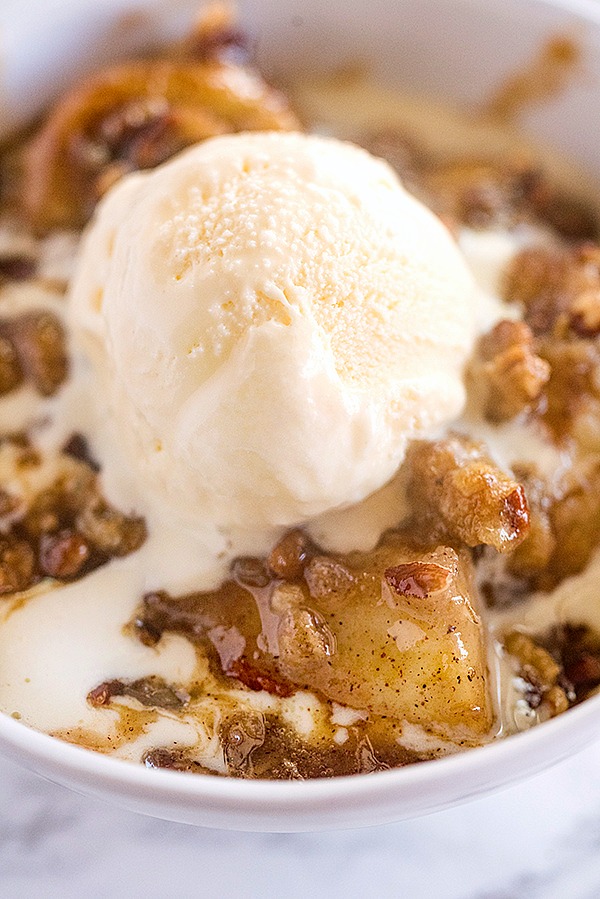 While I waited I scooped out the ice cream and put the scoops in the freezer in anticipation of having a lovely dessert to accompany them.    Time was up!  Out it came, I stood and marveled at it, the oats, the pecans, the golden bananas…but I just needed a small taste. So I ate from the pan totally amazed at the flavors and textures I was tasting.  I forgot all about the ice cream.  Banana Crumble, add it to your “must try” list and  Enjoy! 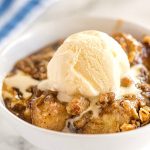 If you are looking for new kitchen items, make sure you check out my top recommendations here!

Stunning dessert that no one could refuse; bananas are always welcomed with open palates at our house!

Lovely photos and your description is almost as good as tasting it! YUM

This looks wonderful, and good to know that the bananas hold up in this! Sounds absolutely delicious!

Wow, this looks so good! I love bananas and love crisps, but have never thought to put the two together. Will have to give this a try. Any suggestions if I don’t have an oven safe skillet?

I’m always looking for ways to use up bananas-so your post definitely caught my eye!! PINNING!! Thank you so much for sharing at The Wonderful Wednesday Blog Hop!!!

I would’ve never thought to try bananas but your crumble came out beautifully!Pinned!

I was so pleasantly surprised when I made this Momma Baker, it’s absolutely delicious!

You always bring the most delicious things to our party! Thank you. Pinned and tweeted. We feel honored that you take the time to stop by our party. I hope to see you on Monday at 7 pm. We love to party with you! Happy Saturday! Lou Lou Girls

Oh yum… Not only does this sound good… but your pictures make me want to dive in!

This is a brilliant idea! I love bananas and this recipe is amazing. Thank you very much for joining in the celebration of #purebloglove, we enjoy having you each week. I hope to see you on Thursday at 8PM, EST through Sunday night. ~Cydnee

I am making this for a friend who can’t have nuts. Do I need to add more oatmeal if I’m leaving out the pecans?
Thank you!

Yes Tyann, add a little more oatmeal to make up for the nuts.

This one was a winner. My kids loved it. Only thing is, I reduced the amount of sugar and replaced the pecans with walnuts.

I LOVED this Lyra, just imagine making it and topping oatmeal with it!! Thank you for coming back to tell me you made it!

This is the perfect comfort dessert! Warm with ice cream topping!

I’ve made many fruit crumbles, but never a banana crumble! This turned out so delicious and I will definitely make again!

Aw What a great idea to replace the traditional apple with banana! My favorite fruit 🙂 Looks simply amazing!

I love anything bananas especially when it involves dessert! I’m adding this banana crumble of recipes to make this month.

0
Reply
Make Your Own Banana Heaven With 25+ Lovely Desserts