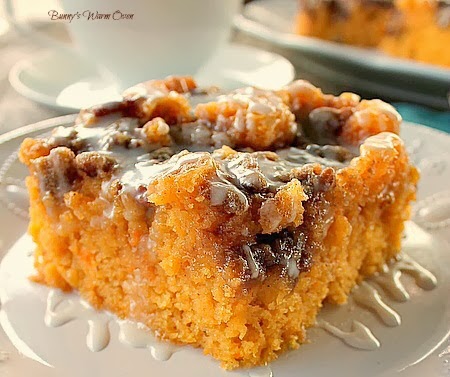 Incredibly delicious…a dense moist sweet potato cake that tastes like a cinnamon roll.  Paul and I absolutely love sweet potatoes.  We love them anyway we can have them, even in cake.  I saw this recipe on a Facebook recipe group called GFCAV Presents Food Recipe Central.  It was posted by Sharon Daniel-Roan.  Thank you so much Sharon for this amazing recipe!!  I copied and saved it because I knew I was going to make it, I just didn’t know when.  Today was the day. 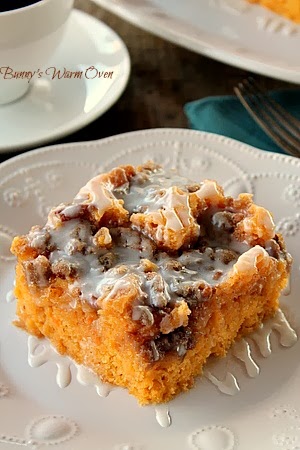 Paul doesn’t like sweets as much as the sugar queen does so I cut the topping recipe in half and added 1 cup chopped pecans to give the cake a nice crunch. It was more than enough to cover the top of the cake.  The topping is moist, I took it in my hands and broke pieces off until the top was covered.  Because I halved the topping I didn’t swirl it through the cake, I just let it sit on top. Since we’re making a cinnamon roll cake, let’s take about cinnamon.  I’ve been baking for over 30 years and never knew there was a difference in cinnamons.  For this recipe I used Flavor Of The Earth Ceyon Cinnamon Powder.  After opening the Ceyon Cinnamon and comparing it to the brand that I always buy I couldn’t believe the difference in aroma and taste, it also has health benefits to boot.  Another terrific reason to use it.  My cake baked at 350 degrees for about 35 minutes.  I let it cool slightly while I made the glaze and then poured that over the cake. Paul couldn’t believe how good this was, he loved it! This is one amazing moist delicious cake!!  I hope you love this as much as we did!! 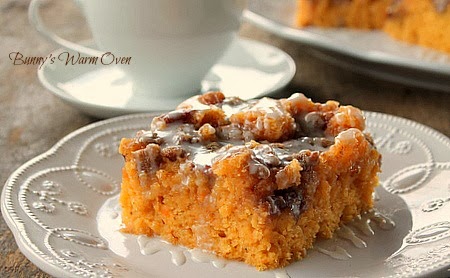 In a large bowl combine flour,sugar,salt, and baking powder and nutmeg.  Stir with a fork to combine.  In another large bowl beat sweet potatoes and milk until smooth.  Add beaten eggs, and vanilla, beat until combined.  Slowly add flour to sweet potato mixture, mixing until just incorporated.  Slowly stir the melted butter into the batter until well combined.  Pour batter into prepared pan.  Make topping.

Topping directions:
Mix all the topping ingredients together until well combined.  Drop evenly over the batter and swirl with a knife.  Bake cake for 30- 35 minutes.   After cake is baked, cool slightly while making the glaze.

From time to time Bunny’s Warm Oven may have “affiliate links” in a blog post or in a recipe ingredient list.  Which means if you click on the link and purchase an item I receive an affiliate commission.  Thank you for supporting my efforts at Bunny’s Warm Oven when you shop.

I too had the issue that it did not come out like a cake. It was almost pie like only denser.

Kim this recipe gives me the most diverse comments ever. Either people love it or they have an issue with the texture. That being said, we loved it, I’m hoping you did too. Thank you for coming back to comment , I appreciate it.

I don’t understand why so many people are having problems reading this recipe it was clear as day to me I have made it several times it is awesome every time wouldn’t change a thing. I do agree that half the topping and rice is just right. Thank you so much for this wonderful wonderful recipe

OMG, so good! My husband doesn’t like sweet potatoes so I waited until he stopped raving about it before I told him. He’s happy to eat sweet potatoes anytime, so long as I use them this way!

I have a question rather than a comment. Is the sweet potato mashed before measuring? Thanks!

Yes Kristi it’s mashed. Hope you like this one!

The issue comes from the filling being titled topping implying it goes on top under the glaze.

So good! I cut the recipe in half because it is just my husband and me in quarantine.
I don’t have the correct size pan so I used a glass loaf pan. It took about twice the time to bake.
Yesterday was my husband’s birthday and this was his cake.
How does he like it? Well, not 24 hours later it is almost all gone! A real winner of a recipe. Thank you

That is awesome to hear! You’re a stronger person than I am, it’s hard to cut things in half when we are home all the time, LOL!

Is there no print button?

There is a line that says “to print the recipe click here” 🙂 Hope that helps!

Can I make these into muffins/cupcakes??

The recipe listed is half or do I use half that’s posted? Hope that make sense.

I have made this cake several times and it is good but wet in the middle. What am I doing wrong?

This cake is absolutely delicious I followed the exact recipe so delicious I have a small piece left in less than 30 minutes it was half way gone . Truly a new addition to my recipes. Thank you so much for sharing.

I can’t wait to make this cake. I am going to add coconut in topping.

Never mind. Once I tried to print the recipe I saw the size pan to use.

I bought a bag of reduced price prepared cubed sweet potatoes so I chose this recipe to use them in. For the milk I used a can of evaporated (was exactly 1 1/2 c) and used 1/2 c stevia and 1/4 c reg sugar. Replaced butter with coconut oil. I reduced the topping by half and used confectioners erythritol. Reduced the glaze to half and used brown sugar stevia. The batter was light colored but after baking it looked as if it was a chocolate cake! Maybe the dark brown sugar? It was very good though.

For the sweet potato cake do I use self rising flour or all purpose?