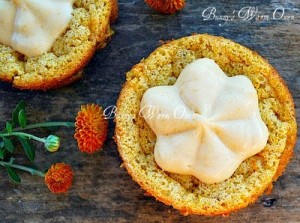 Pumpkin Tarts made with a souffle like batter, filled with a cinnamon and pumpkin flavored cream cheese
To Read More, Click On The Recipe Title 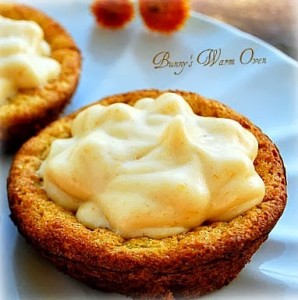 I love finding “new to me” recipes to make something old new again.  I need to thank Jerzee Tomato for that very wise suggestion.  This is a souffle like cake batter made in muffin tins.  The little cakes rise while being baked and fall after coming out of the oven and cooling.  This leaves you with a concave top to fill with cinnamon and pumpkin flavored cream cheese.  The recipe is easy to follow, it takes a little more prep than an average cake recipe but it’s totally worth it.  The “tarts”  are very soft and airy absolutely delightful on their own to eat, filling them with cinnamon and pumpkin flavored cream cheese makes them decadent.  After baking, make sure to let these tarts cool completely in the muffin tin before attempting to remove them, they are extremely soft and will get boogered up ( very technical baking term) if you try to remove them before they cool.  I did have to add an extra cup of confectioners sugar to the filling to make it stiff enough to pipe into the tarts, and as the directions state that was my preference. These are best eaten cooled from the refrigerator.   I can see the wheels turning as you contemplate varies adaptions to this recipe. maybe a different flavored filling or adding nuts to the filling as well. These little tarts would be wonderful served for the holidays, have fun with it, that’s what it’s all about.  Enjoy! 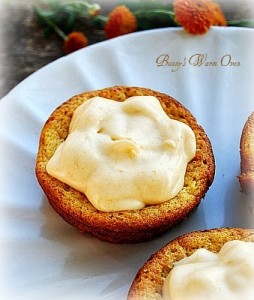 Tarts: Preheat oven to 325 degrees; spray two 12-count muffin tins with cooking spray. (If you have only one muffin tin, make sure to re-spray it with cooking spray before adding the batter for the second batch.)
Melt the butter in a small bowl and set aside.
Whip the egg whites until stiff peaks form, about 5 minutes.
In a large bowl, beat egg yolks and sugar until pale, about 5 minutes. Mix in the melted butter and water and combine. Add the flour, breaking up any lumps, then add milk and vanilla.
Add the pumpkin purée and spices and whisk until smooth. Slowly add egg whites, whisking gently until combined.
Pour the batter into each muffin cup, filling about ¾ full (the batter will rise but sink as it has cooled.)
Bake about 20-22 minutes or until the cups are springy to the touch.
Cool completely before icing.

Icing: Whip butter and cream cheese until smooth. Add confectioner’s sugar slowly, then add vanilla and milk. Add pumpkin and cinnamon and continue blending. If you like thicker icing, add more confectioner’s sugar.
Use a piping bag to ice the tarts or simply spread icing on top with a knife.
The tarts are best chilled, so keep them in the refrigerator if you’re not eating them right away.