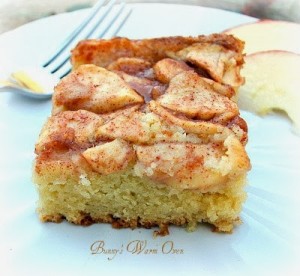 Cream Cheese in the cake batter makes this cake incredibly moist.  The apples on top are mixed with cinnamon and sugar.  The perfect topping for this delicious cake. 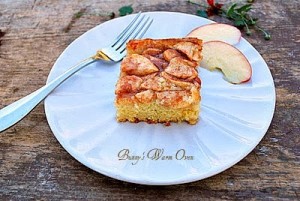 This cake was made for dessert for company we were having for dinner.  Everyone loved it so much they wanted to take slices home for later.  The cream cheese in the cake batter makes it very moist.  It’s not a tall cake but it definitely holds it’s own in flavor and texture.  The apples are tossed in sugar and cinnamon before topping the cake. There’s just enough cinnamon in with the apples to complement them and not over power the taste of the apples.   There’s also one step I’d urge you not to skip.  Most of the time if your working with sliced apples, they are tossed in lemon juice to keep them from browning .  I’ve found that lemon juice does more than that for apples, it brightens the flavor of them as well as it does for other fruits. As always when your making a homemade cake, don’t over beat the batter, incorporate the ingredients until they are just mixed and you’ll have a nice soft cake.  This was easy to put together and the end result was fantastic.  This is a keeper Kids.  Enjoy! 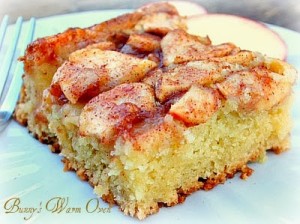 Set the oven to 350°F.
Grease a 13 x 9-inch baking pan.
Dip apple slices in lemon juice to coat; set aside.
In a medium bowl, combine the butter and cream cheese; add in the sugar, and beat on medium speed until light and fluffy.
Add in the eggs, one at a time, beating well after each addition.
Beat in the almond extract.
In a bowl; sift/mix together the flour, baking powder, baking soda and salt.
Add the flour mixture to the creamed mixture, alternately with the milk, beginning and ending with the flour mixture; mix well after each addition.
Pour the batter into prepared baking pan.
Combine the 1/2 cup sugar, 2 Tbsp flour and the cinnamon in a small bowl.
Toss the apple slices in the flour/cinnamon mixture, tossing lightly to coat well.
Arrange the apple slices evenly on top of the batter in the pan.
Bake for 50-60 minutes.
Pin
Share
Tweet
Share

That looks absolutely stunning and I can almost smell it! Mouthwatering 🙂 I would probably leave the coffee out of a batch, which the kids would prefer, I think.

If you’d like, I have a linky for great food posts that I’d love you to add this to. It’s called #recipeoftheweek and you can find it under ‘Food’ on my home menu x

I made a healthy version of this, amazing recipe!

This looks really good. Will definitely make this.

Stephanie this is a delicious cake you’ll love it, come back and tell me how it went for you!

This recipe is awesome and our RecipeLion readers love it! I just featured it in a blog post: http://www.recipechatter.com/coffee-cake-recipes-brighten-day

Thank you so much Emily! I love RecipeLion!