CopyCat Kozy Shack Rice Pudding is a delicious homemade rice pudding made on top of the stove. 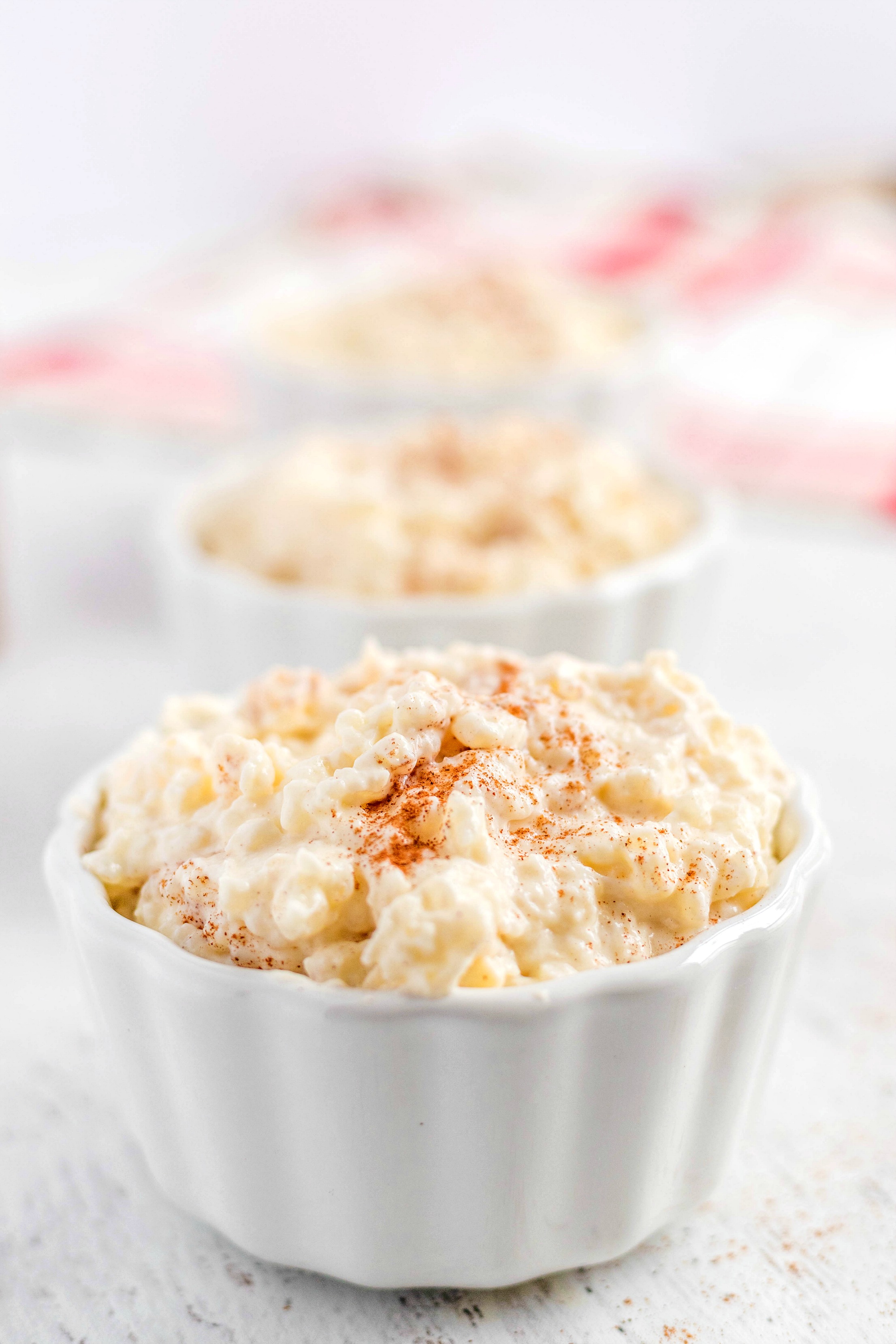 This recipe for CopyCat Kozy Shack Rice Pudding yields the most amazing rice pudding you’ll ever have the pleasure of eating. It equals if not surpasses what you could ever buy in a store. For those of you who don’t know what Kozy Shack Rice Pudding is, it’s a prepackaged rice pudding you can buy in the refrigerated section of your grocery store and it’s delicious. This homemade version is amazing and well worth the time it takes to make it. 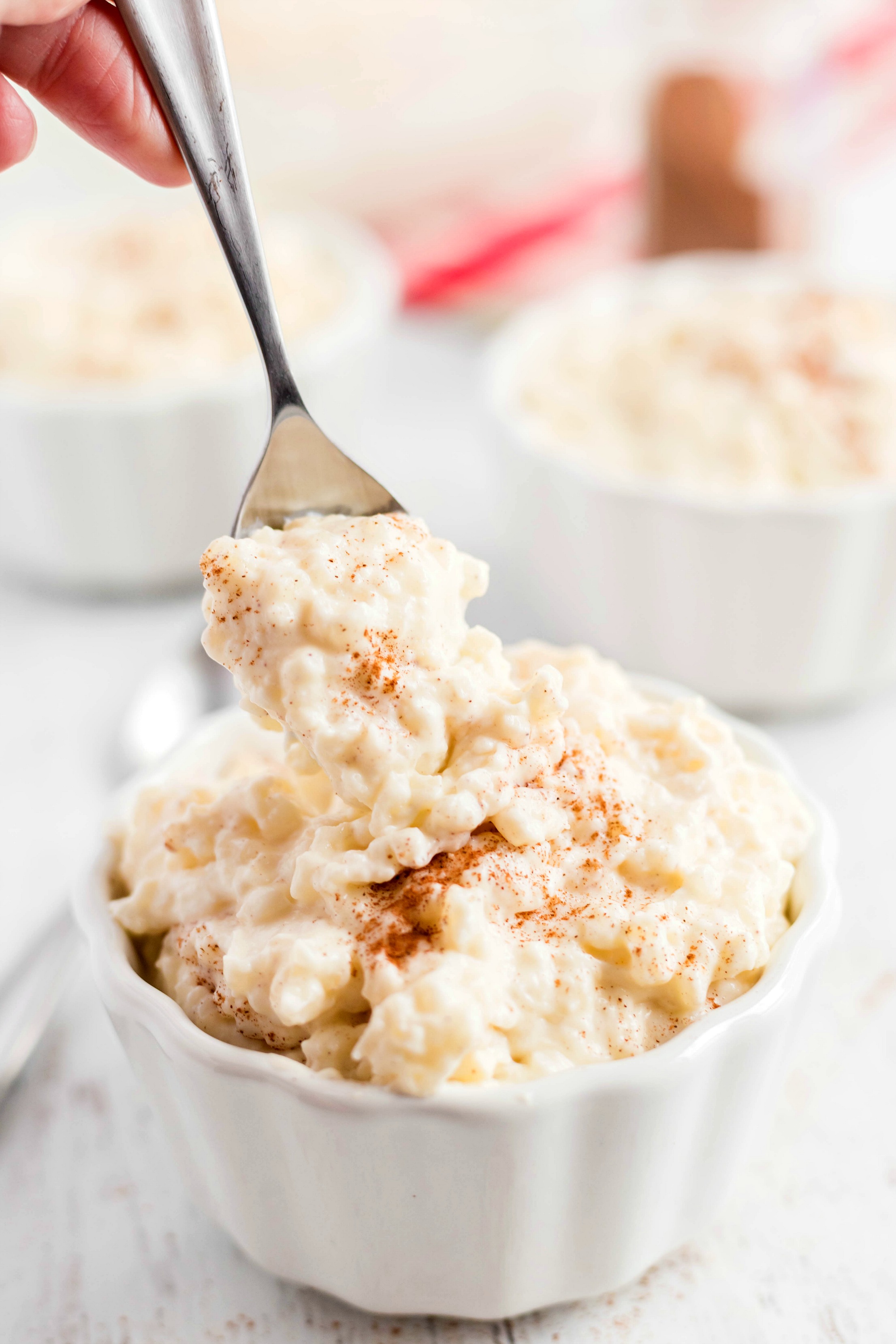 There are two very important things you need to know about making CopyCat Kozy Shack Rice Pudding before we start making it.  First, this recipe will cook on the stove for an hour, second it needs to be stirred frequently. Frequently as in stirring every 10 to 15 minutes. These two things are very important to making this delicious recipe.

I probably lost a few of you when you read the cooking time is an hour and you have to stir every 10 to 15 minutes, all good things take time.  The day you plan on making the pudding just plan to hang around in the kitchen for an hour. And as far as remembering to stir every 10- 15 minutes? Set your phone to go off to remind you to stir, or use an oven timer.  Trust me, you’ll be rewarded with the best rice pudding you’ve ever had the pleasure of tasting.  We’re going to make the recipe together so let’s get started making CopyCat Kozy Shack Rice Pudding!

We start this delicious recipe by putting 2 quarts of whole milk into a 4 quart heavy duty saucepan.  Add  1 cup of arborio rice and 1 cup of sugar to the pan.

Next , add 2 Tablespoons of butter and 1 Teaspoon of vanilla to the pan. Stir the ingredients together and cook over medium to high heat until it comes to a boil.  After it starts to boil, reduce the heat and simmer the mixture uncovered, stirring every ten to fifteen minutes, for about an hour. After an hour of cooking on top of the stove and stirring ,the rice should be tender and the pudding thick. 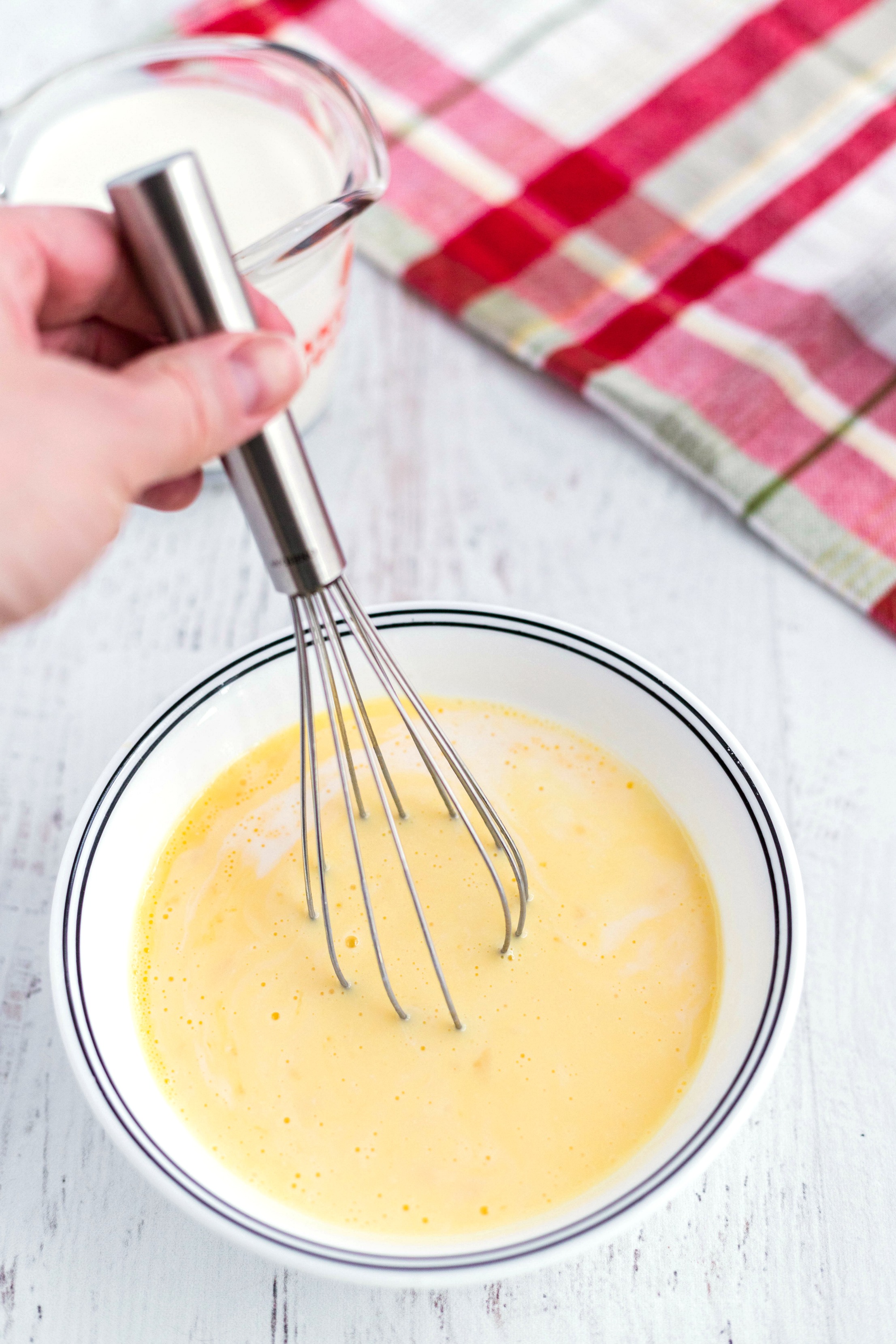 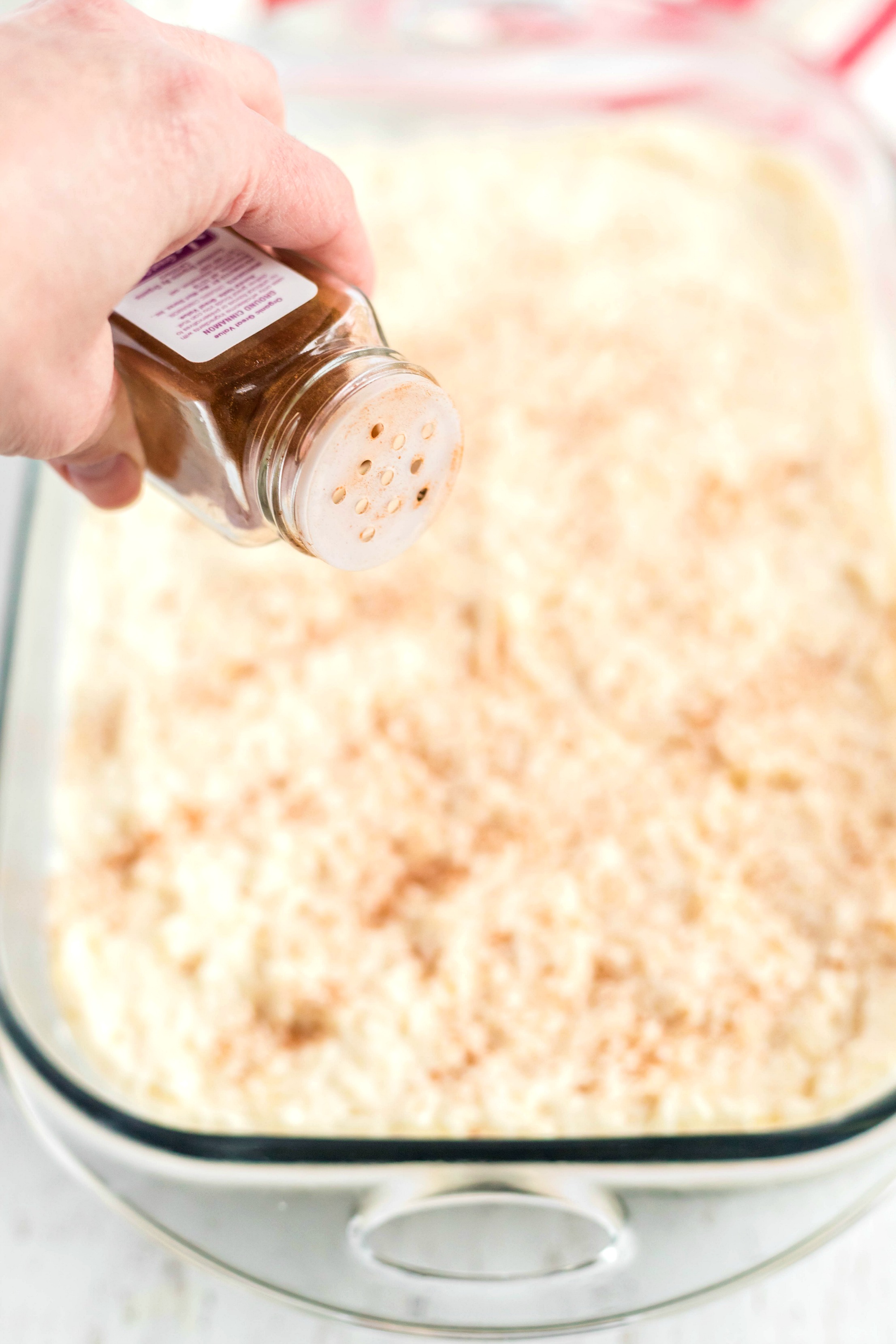 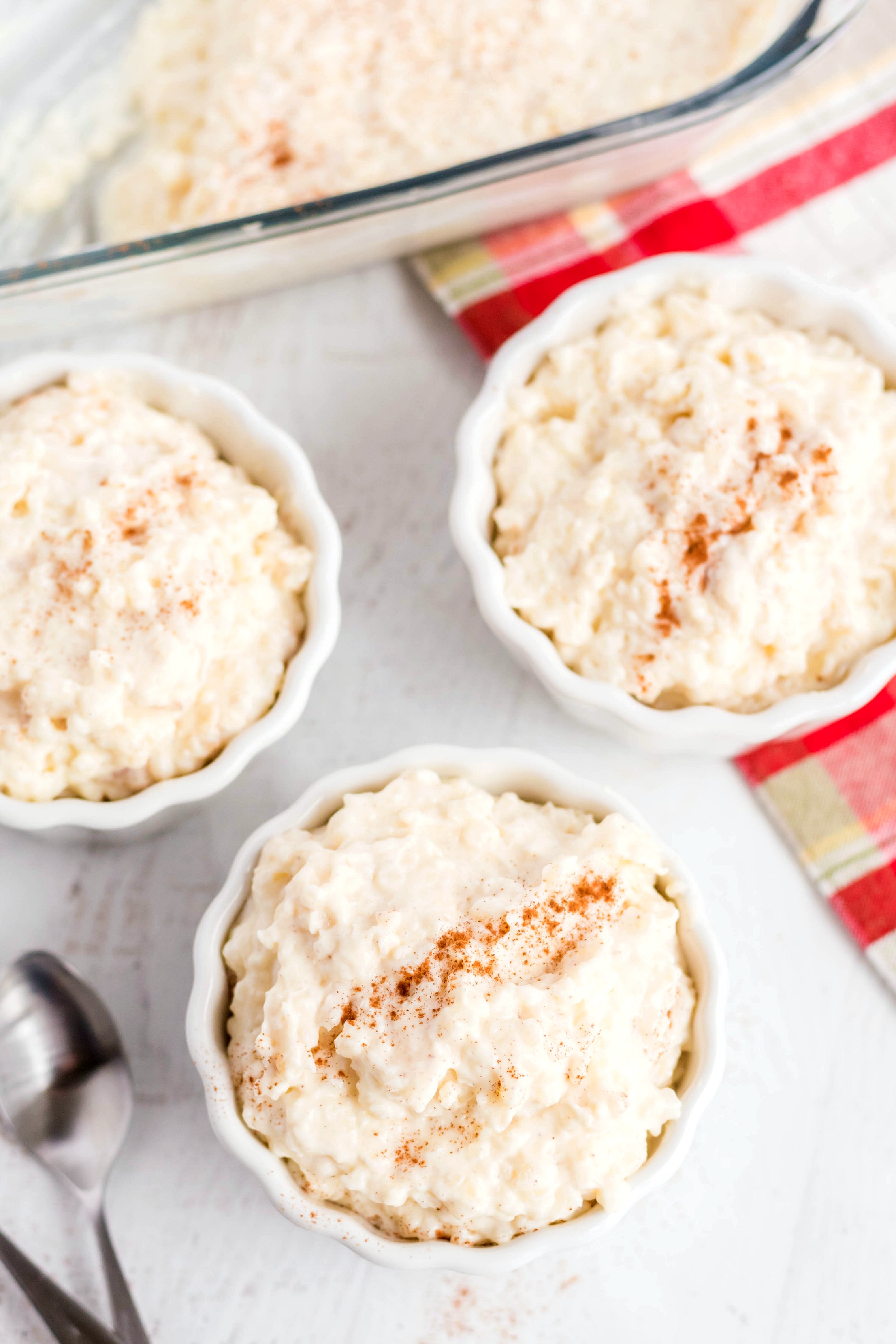 The recipe for CopyCat Kozy Shack Rice Pudding made me a large bowl full of rice pudding. Even tho it made a lot, it didn’t last long in this house with just the two of us. It was just too good to resist. Make it and ENJOY! 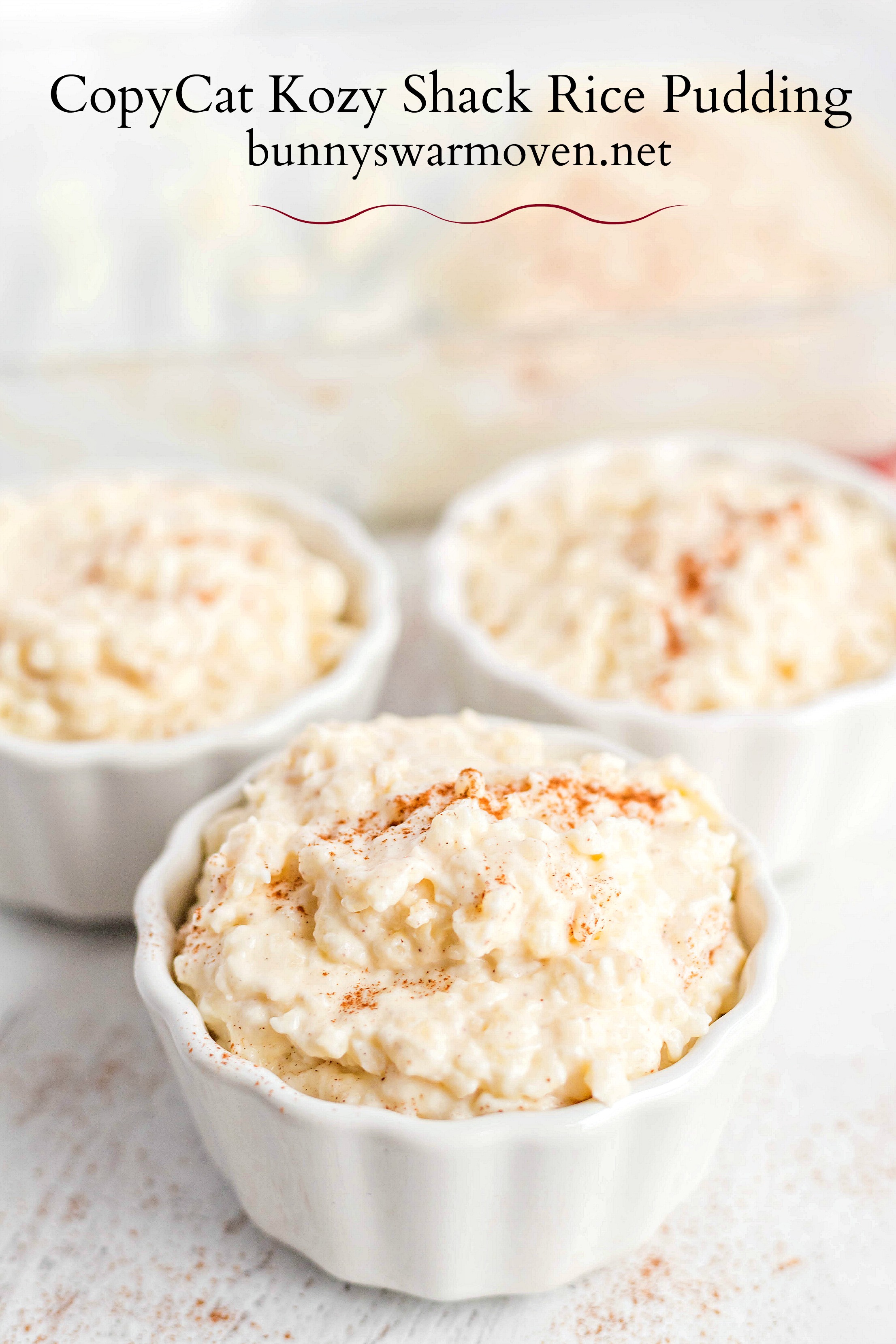 Looking For More Recipes From Bunny’s Warm Oven, Try These! 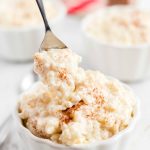 I AM ALWAYS LOOKING TO INTRODUCE PRODUCTS TO OTHERS, BUT I ONLY PROMOTE PRODUCTS THAT I HIGHLY RECOMMEND. CHECK OUT MY RECOMMENDED PRODUCT:

i made it and it was a little soupy, any recommendations to thicken it up?

The only thing I can say is put it back in a pan and cook it a little longer. I know that sounds weird but try it.

Hi Mary, I made your rice pudding recipe tonight and it was sooo good. I put it in the fridge for over 3 hrs but it was still not thick enough. I accidentally added a cup of heavy whipping cream instead of heavy cream. It was thick when I added the eggs but became runny after I added the heavy whipping cream. Could the whipping cream have caused the pudding to become somewhat runny? The taste is awesome. Thanks so much for this delicious recipe.

Heavy Cream and Heavy Whipping Cream are one in the same.

Like any other “pudding,” it has to thicken on the stovetop. Refrigerating only makes it cold.

It is absolutely amazing! This recipe is by far the best one I’ve tried but I used 6 cups of milk instead of 8, and it turned out perfect!!

So glad you enjoyed, thanks for letting us know! Have a great day!

I could never make good rice pudding until I found your recipe. Follow your directions and it turns out perfect every time!!! Thanks!!! DELICIOUS!!!

WONDERFUL Becky! Thank you for taking the time to come back and tell me, I appreciate you!

Best recipe i have ever used!! Made enough for 6 but flattened by 3 of us in one sitting 🥰just yum!! Thank you

Tell me about it Bernice, I ate half the bowl myself! LOL! Thank you for coming back to tell me you made it, I appreciate you Bernice!

Hi Mary,
I live in Ontario, Canada and our milk labelling is different than the U.S. Could you please let me know the fat % of whole milk and that of heavy cream so I can try the closest match available where I live? Thank you so much!

Good morning neighbor! I hope your having a wonderful Summer. The milk fat in the US for whole milk is 3.25 percent milk fat. You’ll love this one HS, let me know how it turned out for you!

Actually, whole milk in the US is controlled to 3.5% butterfat content (not 3.25%). Kozy Shack uses 2% reduced fat milk in their recipe.

Hi, I was wondering if this recipe could be adapted to be made in an Instant Pot?
If so, how would I do it? I’d love to try it out & see what happens but I’m not sure where to start.
Thanks 😊

I don’t own an Instant Pot Michelle but I did look up an article for you about how to adapt recipes to an instant pot, I hope this helps!https://www.platejoy.com/blog/how-to-adapt-recipes-for-instant-pot

This is the best rice pudding I’ve ever had! It turned out perfectly and was so creamy and delicious! I will definitely make this again!

I made this recipe for the first time last night and tasted it this morning. OMG! It’s delicious. I think it’s about as close to Kozy Shack as is possible. The consistency is spot on. I followed the directions to a tee using all fresh ingredients. This may have been the first time I made it but it certainly won’t be the last.

Wow, I’m so glad you enjoyed it. Thank you for letting us know!

OMG Very best rice pudding I have had. This will be a regular in our home! THANK UOU.for sharing this

Should the rice be washed or not? I don’t understand ” (don’t not rinse the rice) ” I do not usually wash rice, should I?

I finally got around to making this today. Having read some of the comments by others, I whisked the eggs and cream together, before tempering and blending. OMG!!! So good!!! Consistency was perfect. Pudding was perfect, albeit slightly less sweet than the original, which makes it even better. I’ll be making this again, and soon! Darn you, Mary! I can see adding 25 pounds to my svelte (Ha!) frame.

Hi there sounds relish. Is there another rice that would be suitable? I’ve never heard of this kind and I’ve never seen it in any stores here.

This is the one that makes it “copycat” but you could definitely experiment!

Rice pudding has always been my favorite dessert but my mom-mom is the only one that could make it good. Unfortunately she passes 2 years ago. This recipe tastes so much like hers. I followed the recipe to the t. The hour cooking n stirring was soooo worth it. This will be a staple in my house. It was gone in one night. Thank you so much!!

I am so sorry for your loss, Connie. I am so glad we could help replicate the recipe.

Change the milk to 2% reduced fat, reduce the rice to 2/3 cup (and use long-grain white rice), omit the butter and cream, and follow the rest of the directions . . . you’ll have something much closer to Kozy Shack rice pudding . . . which is a copycat of an old railroad recipe from the late 1800s or early 1900s. Personally, I also omit the salt as an unnecessary ingredient.

I cooked the rice for an hr. Was still crunchy. Cooked another 20 minutes adding more milk and it helped a bit. However it did not come out like Kozy Shack where the rice is very soft and not crunchy. The recipe itself tastes great. Just got to figure out how to get the rice softer. I’m a very experienced cook and Baker. I make everything from scratch. I’m not sure what I could have done wrong. Any advice would be greatly appreciated.

Mary, I’ve been searching for the holy grail of rice puddings for years and finally found it with your recipe. It is THE BEST and I’d give it ten stars if I could. Not soupy at all; just the right consistency. The test for me is, does the pudding get gluey after sitting in the fridge? Well, yours didn’t! Still creamy and delicious even after cooling–just like Kozy Shack’s pudding! Thank you so much! P.S. I’ve also tried it with non-dairy milk and it was equally good.

Made this twice. First time way to runny. Second time perfect. Both times recipe followed exactly. Thought the rice was issue. Only had white long-grain. But first time took off heat at the hour mark then after adding in eggs covered with plastic wrap in fridge for 3 hours. Second time kept stiring on stove for 90 minutes. To the point no liquid left then let sit out and cooled for a couple hours then put in fridge overnight. Perfection!!!!!