Chunky Apple Cake with Browned Butter Frosting is made with chunky apple pieces, pecans and cinnamon.  It’s an extremely moist cake topped with a browned butter frosting.  This is DELICIOUS! 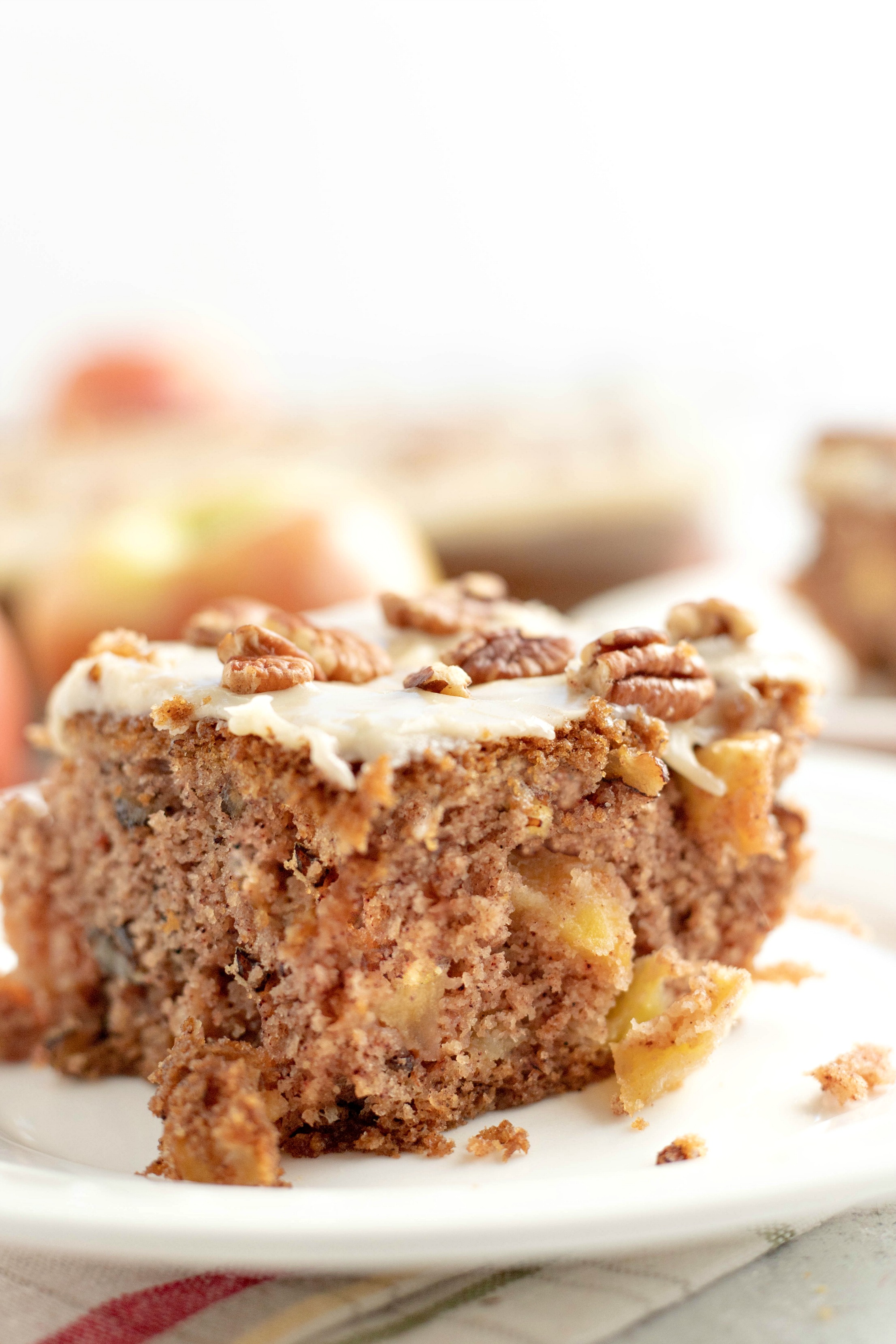 If this is the first time you’ve ever made a Browned Butter Frosting your in for a treat.  When butter is cooked on the stove until it’s golden brown it takes on a nutty flavor.  When you add the powdered sugar, vanilla and milk to the browned butter to make the frosting dip your finger in it to taste it.  It’s has the most amazing flavor ever, all because of the browned butter. You could eat this stuff with a spoon. Topping this moist ,delicious apple cake with browned butter frosting turns it into a decadent treat. 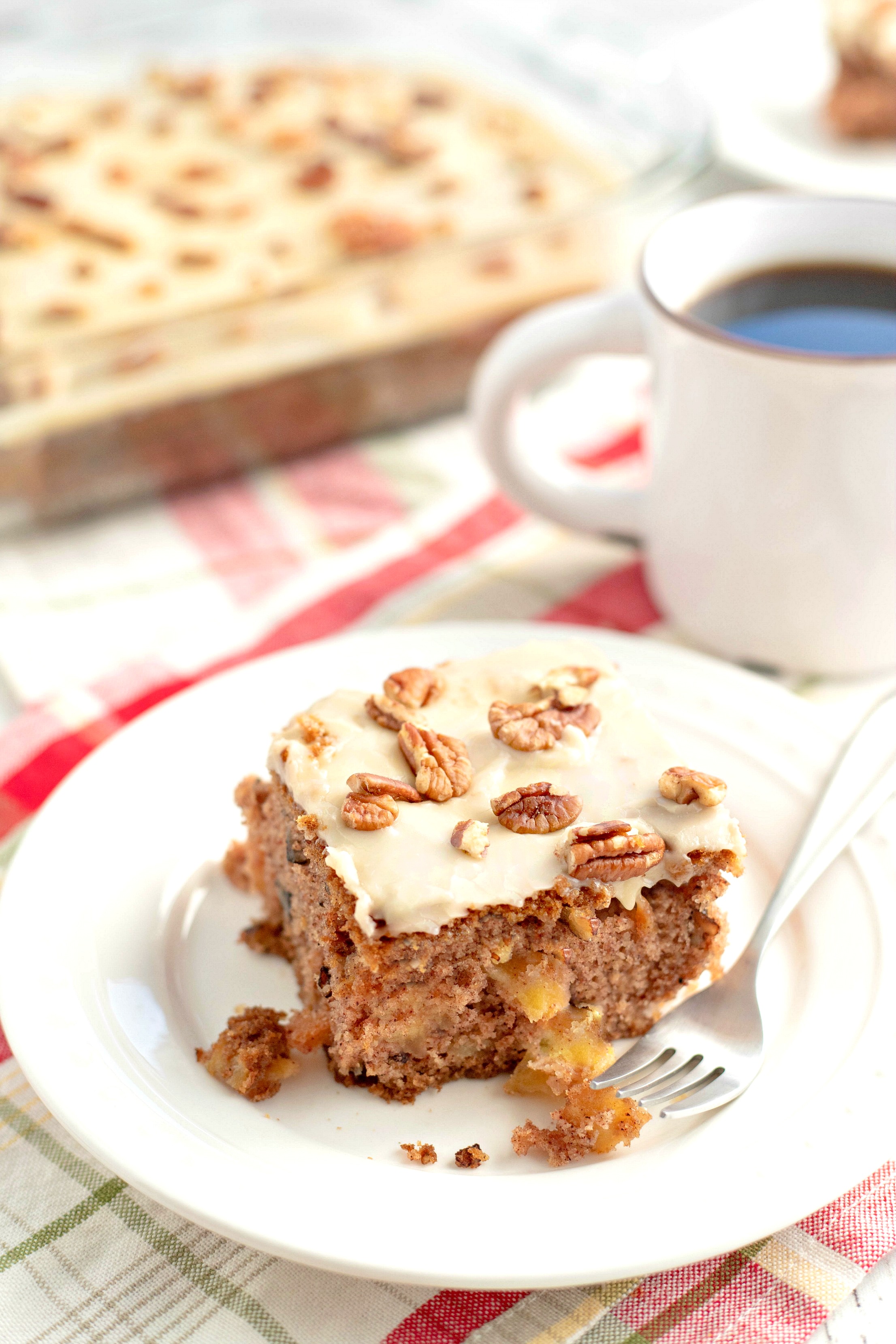 The recipe uses 3 cups of coarsely chopped apples. Make sure the apples you use are baking apples. Eating apples have a tendency to get mushy when you bake them, we don’t want mushy apples, we want nice chunks of apples that hold their shape for the recipe. I always buy McIntosh Apples because they’re a good eating apple as well as a baking apple.  I know that when I’m in the mood to bake something with apples, I don’t have to run out and buy another apple variety, I can use what I already have in the fridge. 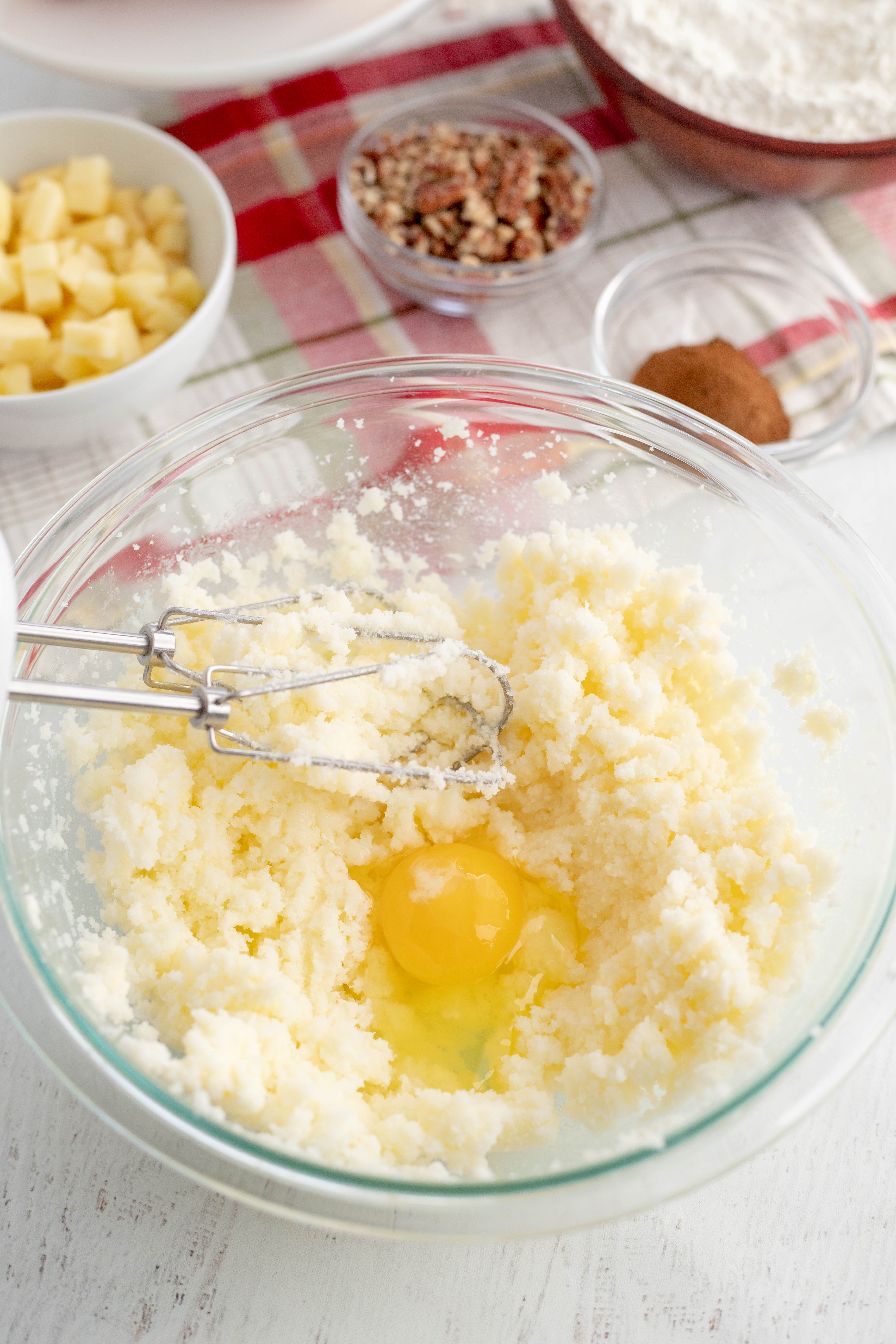 We start the recipe by placing one cup softened butter and 2 cups white sugar in a large bowl. Beat the two together with an electric mixer until they are light and fluffy.  Beat the eggs in one at a time until well blended. Put your electric mixer to the side, you’ll be stirring the rest of the cake ingredients into the sugar, eggs and butter. STIR in the vanilla, then add the flour, baking soda, salt and cinnamon to the bowl and Stir the ingredients together until well combined. 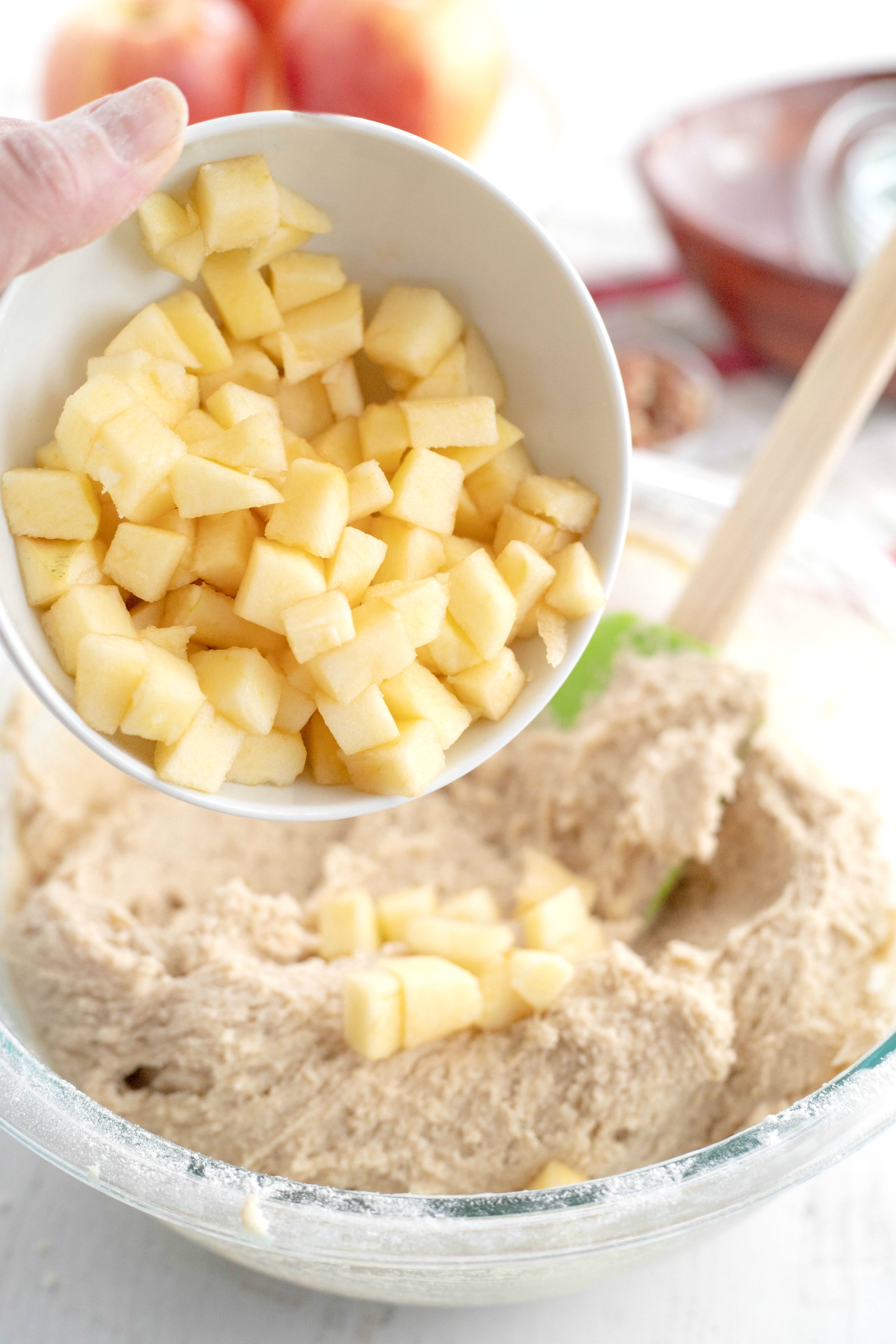 Add the apples and pecans to the bowl and stir them into the batter.  Spoon the batter into a greased 13×9 inch baking pan and bake in a 350 degree preheated oven for 40 – 45 minutes or until the cake tests done with a toothpick. 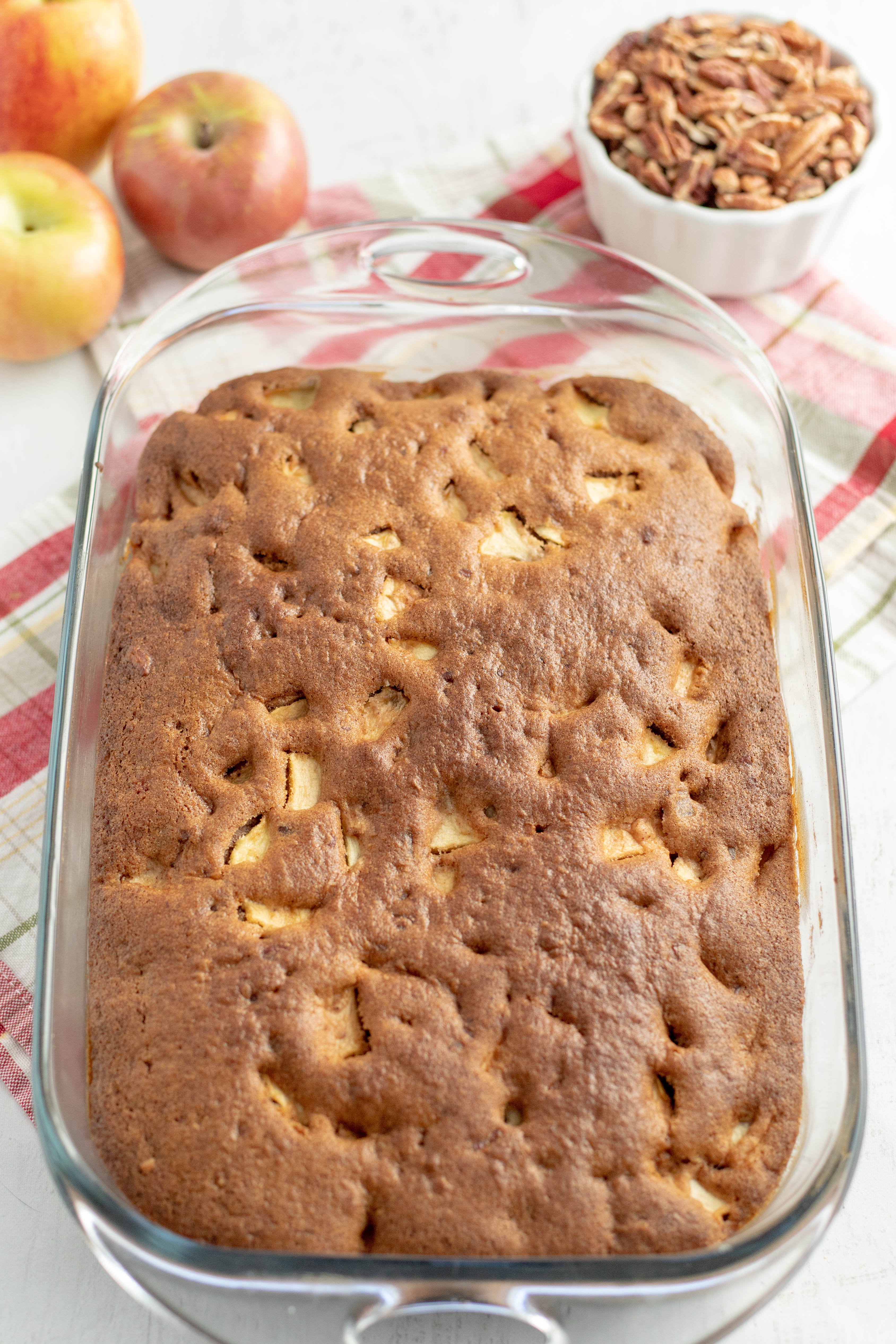 Let the cake cool completely before you top it with the Browned Butter Frosting. 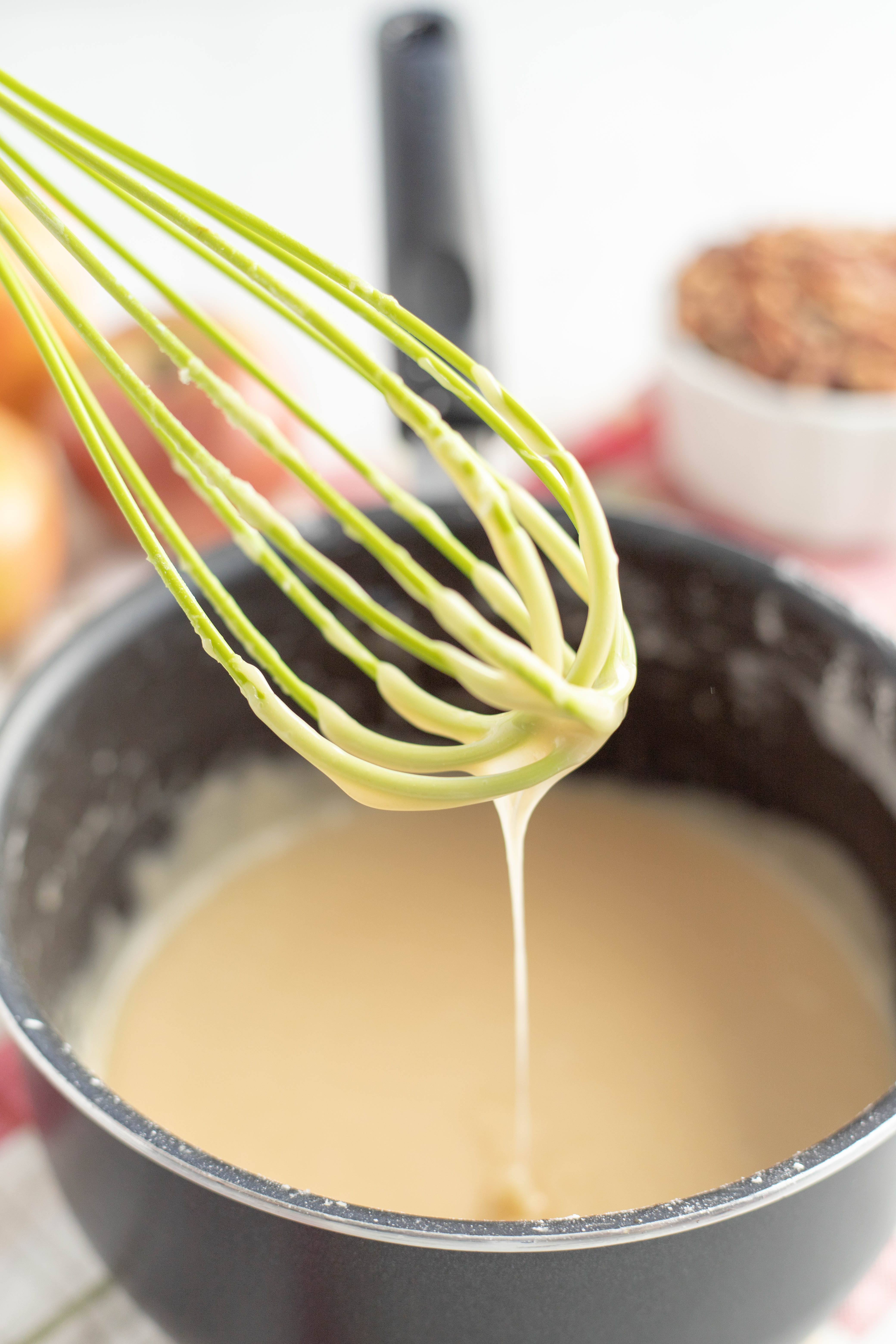 To make the Browned Butter Frosting place 1/2 cup butter into a medium size saucepan under medium heat. Stir the butter constantly until it turns a golden brown. You can’t walk away from the pan while your browning the butter. The butter can go from a nice golden brown to burnt in a matter of minutes.  Remove the browned butter from the heat and gradually whisk in the powdered sugar. Stir in one Teaspoon of vanilla and enough milk so that the frosting is smooth and the spreading consistency you want. 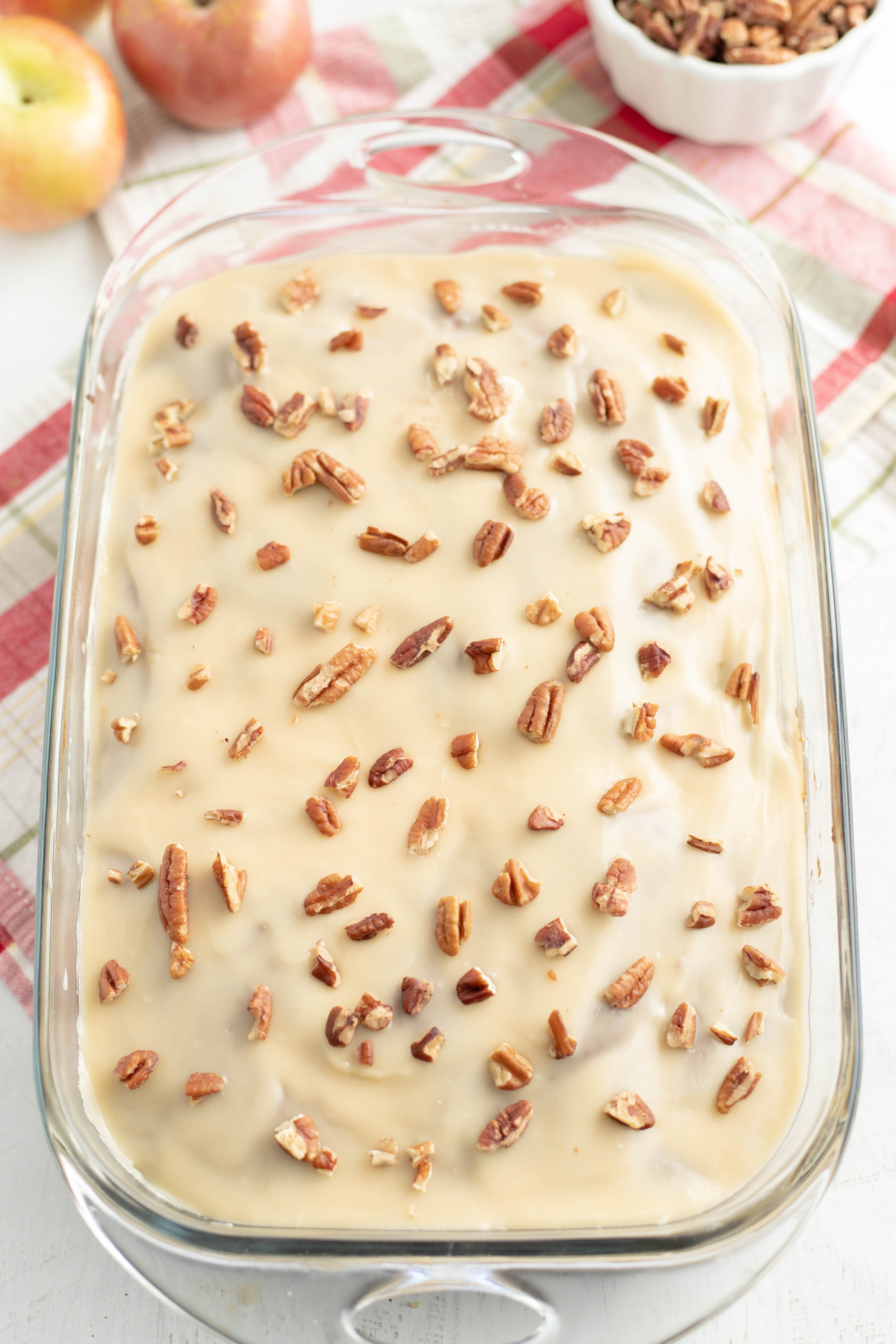 Frost the cake and garnish the top with pecans if you like. 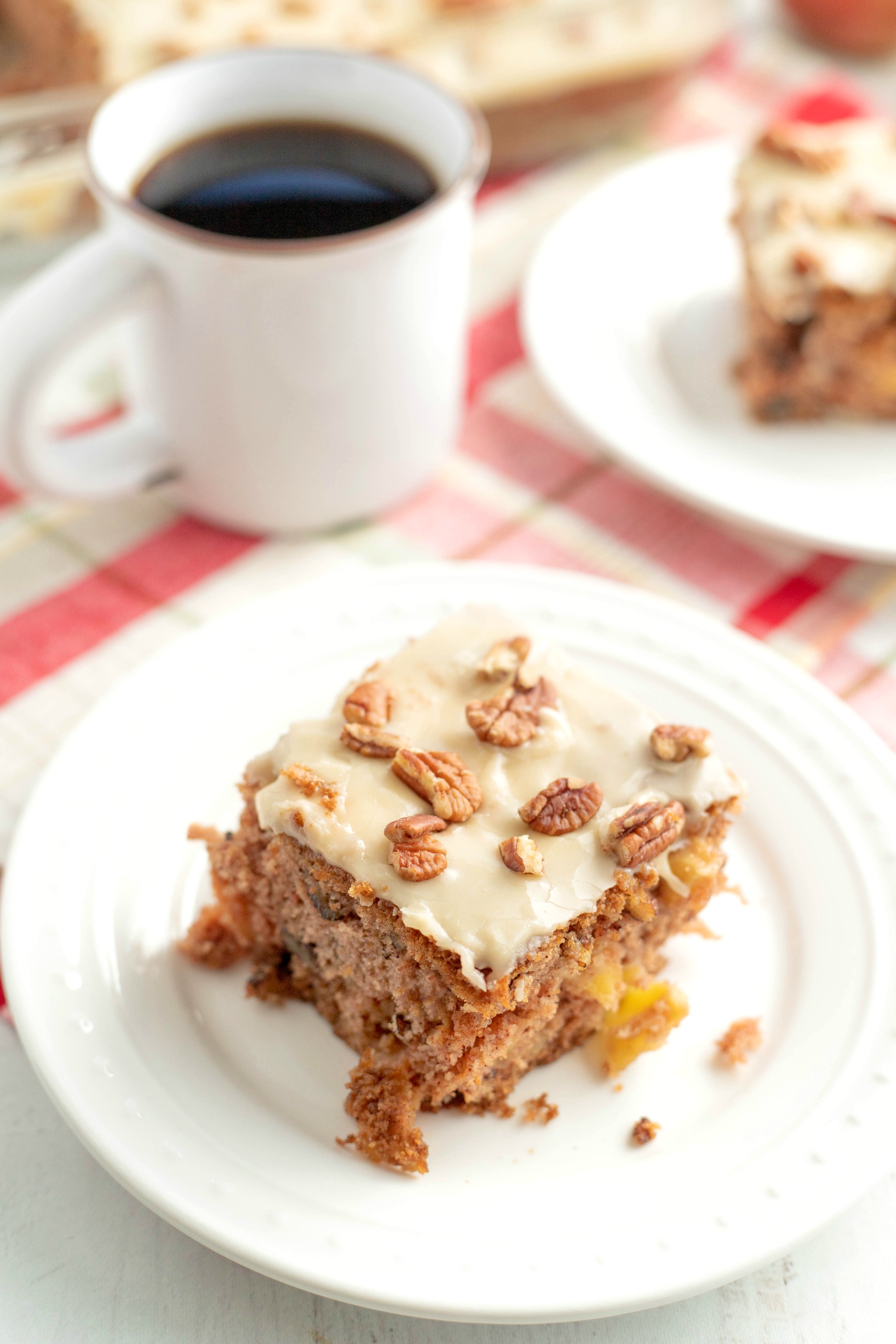 Chunky apple pieces, pecans and cinnamon in an extremely moist cake topped with browned butter frosting.  This is DELICIOUS!   I had my first taste of the cake after it cooled slightly from the oven before it was frosted, I have zero patience when it comes to sweets.  I can’t ever wait for anything to cool completely down.  My one little sliver turned into a bigger sliver, then Paul tasted it…it brought back a great memory for him of a cake his grandmother use to make when they were little.  This was good without frosting, with frosting it’s FANTASTIC!  The frosting  puts this cake up into a whole other level. This is perfect, absolutely, positively perfect. Chunky Apple Cake with Browned Butter Frosting, you need this one Kids!  Enjoy! 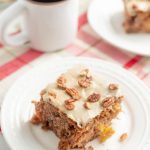