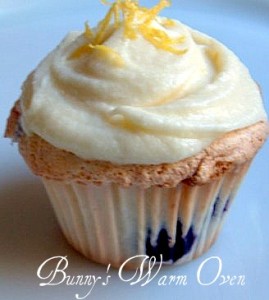 The frosting on these cupcakes is so good I can’t keep my fingers out of it! I wanted to try and keep this cupcake light since it’s angel food cake so the only thing I could think of was cream cheese. And what better thing to pair blueberries with than a little bit of lemon in the frosting.  To Read More, Click On The Recipe Title.

The whole cupcake is soft, the cake, the frosting and the flavor! I’ve made a few from scratch angel food cakes but I’ve never put them into cupcake form. The cupcake recipe was from the Pittsburgh Post Gazette and it was sent in by Helen Lamison. Great cupcake recipe Helen!
The cupcakes didn’t seem to me to take up as much time as a full blown Angel Food Cake. The procedure was basically the same except instead of putting the batter into a tube pan I put them into paper lined muffin tins. When you make an Angel Food cake you don’t grease the tube pan because that’s how the cake rises, the batter grabs hold of the sides of the pans and raises itself up. For the cupcakes, the recipe said to fill the muffin tins at least 2 inches above the tins, since the cupcakes can’t “grab hold” of a muffin lined cupcake tin I assume this is to help it get some height.
This worked out pretty good. That’s the only thing that would be different from making this a cake. The Lemon Cream Cheese Frosting Recipe came from epicurious, it was suppose to go with another recipe but it was exactly what I was looking for. Here are both recipes……I’ve gotta get my fingers back in that frosting bowl!! LOL!!

(( I halved this recipe for the cupcake frosting)

you are exactly right Fran Z, soon we will see her photo on box of her own cake mix products and on FOODNETWORK!!!! She will sell her line of cookware on HSN and QVC, along with her own bakery serving signature desserts. Pen her autobiography…you think she will remember us once she’s famous???

These look wonderful. I made some angel food cupcakes a few weeks ago and was not too happy with them. Perhaps I will try this recipe now. Thanks!

These cupcakes are perfect for spring! I love angel food cake but have never thought to make it in cupcake form. I can’t wait to make these for my family!

Thank you Sarah, yes do make them at let me know what you think!