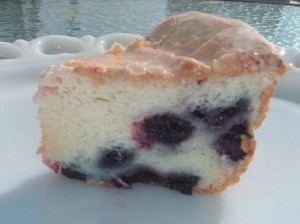 This was my boo boo for the day. I didn’t have enough cream of tartar when I was beating the egg whites for the cake. When it came out of the oven it kinda deflated alittle. It’s not as high or fluffy as it should be. I’m gonna definetly make this cake again because even though it doesn’t look the way it’s suppose to it sure taste good! I’m posting the recipe even though it was a boo boo because it was totally my fault that it didn’t turn out great.

In a large bowl, beat egg whites with a mixer at high speed until foamy. Add cream of tartar and salt; beat until soft peaks form. Add 1 cup sugar, 2 tbls at a time, beating until stiff peaks form.

Spoon the batter into an ungreased 10 inch tube pan, spreading evenly. Break air pockets by cutting throught the batter with a knife. Bake at 375 degrees for 40 minutes or until cake springs back when touched. Loosen the cake from the sides of the pan using a narrow metal spatula. Invert cake ontp plate.

Combine powdered sugar and lemon juice in a small bowl, stir well with a wire whisk. Drizzle over cake.

Gotta ask you Bunny-what did you do with ALL THOSE EGG YOLKS! That’s one great looking and I know great tasting “boo-boo” you’ve got there!!!!! 🙂