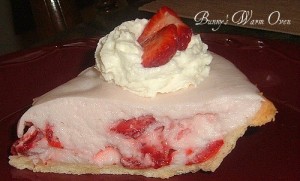 This is such a pretty pie, and it wasn’t hard to make either. I received the recipe via email in a newsletter from The Prepared Pantry. It was so pretty and different that I had to make it. I love using the fruits that are in season when I bake or make desserts. Lets face it there are only so many ways you can make a Strawberry Pie , so I was very happy to get this recipe.   To Read More, Click On The Recipe Title.

My six year old granddaughter Karin loved it. I started out by picking out a pie crust recipe, I always use Paula Deen’s recipe that you can find here. This recipe always makes me a great crust.
The crust was made and baked at 350 degrees until golden brown. Then it was time to hull and slice the strawberries.
The strawberries were mixed with a 1/2 cup of sugar and put in the fridge for 2 hours to draw the juice out of the berries. After 2 hours I drained the juices and put the berries to the side. I added the salt and cornstarch to the juice and stirred till the cornstarch was dissolved. I added water and cooked the mixture till it was thick, whisking it often. I softened the gelatin in water and added it to the hot thickened juice mixture. Then I added the lemon juice and berries.
I beat the egg whites to soft peaks and added sugar and beat until I had stiff peaks.
I whipped the heavy cream until it was thick.
I gently folded the whipped cream into the beaten egg whites, then by spoonfuls I folded the strawberries into the whipped cream and egg whites. I spooned it into the already baked pie crust and refrigerated it until the gelatin in the filling was set and this is what I got!

You will be seeing another Strawberry pie recipe very soon, but for now here’s the recipe for the Strawberry Cream Pie!

In a bowl, mix the strawberries with the first 1/2 cup sugar. Let stand 2 hours in the refrigerator. Drain the juice from the berries and retain the juice.

Mix the juice from the berries with the salt and cornstarch in a saucepan and stir until the cornstarch is dissolved. Add the first quantity of water. Cook until thick,whisking often. Remove from heat

Soften the gelatin in the second quantity of water. Add that to the thickened, hot juice mixture. Add the lemon juice and strawberries.

That pie looks gorgeous! Almost too pretty to eat!

This looks so delightful. Everyone is jumping on the Srawberry wagon lately.
Ikeep running into all these strawberry blogs. :)I just made a strawberry cake last night that will post in August.

well, it’s good to know my saliva glands are working properly this morning. this looks great! 🙂

Gosh this looks AMAZING! I cant wait to bring this to a get together this summer! <3