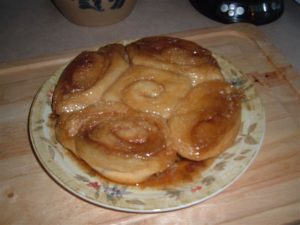 Ok I admit they’re alittle bigger than most people would make, next time I’ll go for a smaller bun , but they’re size doesn’t take away from they’re taste!! The gooey part of these buns is fantastic!! I made these buns with my Potato Bread recipe that I posted below these buns. I just made the recipe as written , after the first rise I rolled 1/2 of the dough out into a rectangle, it was about 19 inches long and probably 14 inches wide. Don’t roll the dough out less than 1/4 of and inch thin or the dough will get tough on you. I used a recipe for the gooey stuff and the cinnamon and sugar for the rectangle on a blog called Sugar and Spice on a post about cinnamon rolls and sticky buns from Peter Reinharts The Bread Bakers Apprentice.  To Read More, Click On The Recipe Title.

Go check it out! I like to combine recipes, I love my Potato Bread recipe so I knew I wanted to use that for the dough, I just had to find the gooey part, and there it was!! After I rolled the rectangle out I took the cinnamon and sugar and spread it on the dough to about an inch from the sides of dough. I rolled it starting from the long side jelly roll style, cut it into pieces about 2 inches wide, I made the gooey stuff from the recipe posted on Sugar and Spice. I put the gooey stuff in the bottoms of two 9 inch round cake pans, (I used all the gooey stuff) then placed the dough cut side down into the gooey stuff making sure they didn’t touch and had room to rise again. After the rise I baked them at 350 degrees for between 30 and 40 minutes on the bottom rack of the oven, make sure you put a baking sheet underneath them as the gooey stuff bubbled up and went over the pan so you don’t have to clean your oven after you make them like I do. It probably bubbled over because I used all the gooey stuff, you don’t have to use it all, it keeps in the fridge a long time. I didn’t put any raisins or nuts on top of these, which you certainly could do, my husband doesn’t like nuts. The best part of Sticky Buns is the gooey stuff, the recipe that I got from Sugar and Spice is fantastic, it stays gooey, it doesn’t get hard enough to break your tooth when it cools down, it stays gooey!!

From Sugar and SpiceCinnamon Sugar for spreading on rectangle: 6 1/2 TBLS sugar
1 1/2 tsp cinnamon

These look ridiculously, intensely delicious. I have a problem with cinnamon rolls: no matter how big, I will eat the whole thing. So making portions smaller would be a good idea for me! 🙂