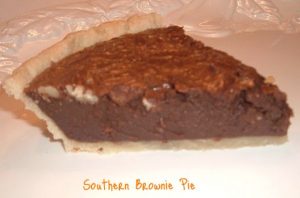 I know I’ve been posting alot of pies lately. I ‘ve never been very good at making pie crust. They never turned out the way everybody else’s did. But now that I started making Paula Deen’s Perfect Pie crust my crust turn out great. So I started making all those pies I haven’t made for years. Sorry, I promise to move on after I post the pie I made for Sugar High Friday. I made this one just because I’ve never made a brownie pie before. It was very easy and good. I like that in a pie, easy and good, doesn’t get any better than that. This recipe also got my attention because it was a “Southern” Brownie pie and I love southern recipes.

1 14 oz. can of sweetened condensed milk (do NOT confuse this with evaporated milk which is a much thinner milk and will not work in this recipe)

1 pie shell (can make your own or use a store bought crust – don’t pre-bake. I used Paula Deen’s Perfect Pie Crust Recipe)

Directions:
First, make the pie crust. If you are not a good crust maker, then a great option is the roll out Pillsbury crusts in the refrigerator section at the grocery. It’s hard to tell those from homemade. If using a frozen crust, get it out and let it thaw.

Get a medium sauce pan. Put the milk, butter, margarine, and cocoa in the pan. Turn the heat to low and slowly warm until everything is melted and mixed together. Stir occasionally so the mixture does not stick to the pan and scorch.
Take the chocolate mixture off the heat.

Put a spoon of the chocolate mixture in with the eggs beaten in a small bowl. This helps adjust the temperature and keeps the eggs from curdling when suddenly put in with a hot mixture
Next, stir in the eggs (with the dab of hot chocolate), flour, vanilla and nuts. The nuts really are optional but do add a lot to the overall taste of the pie.

Bake at 350 degrees F for 40 minutes in a 9 inch pie pan. If you’re using a smaller pie pan, then you may need to push closer to 50 minutes on the cooking time. The toothpick trick does not work on brownie mixtures. You can lightly tap the center to determine if the brownie filling is set.
Southern Brownie Pie is especially good served warm with whipped cream or vanilla ice cream on top. It’s also quite good cool.
This pie recipe, unlike many, does not need to be stored in the refrigerator.
Brownie Pie best eaten the first or second day. If it sits longer, then the brownie filling starts to pull away from the crust. It still tastes fine but does not look as nice.