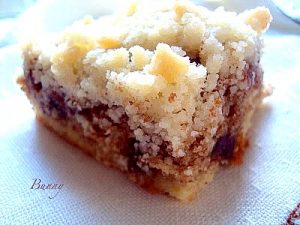 I made this coffee cake once before and followed the recipe exactly and it was delicious. When I work on Sunday nights I try and bake a little something to take with me for the staff. I decided on this cake.
To Read More, Click On The Recipe Title.

I went to the cupboard looking for the yellow cake mix I “thought ” I had to make this, no yellow cake. But I did have a white cake mix so I used that. I also “thought” I had the butter extract the recipe called for, that would be a big fat no! So much for thinkin! I made the batter up,had it in the pan and stood there thinking…maybe I’ll add some chocolate chips to this, so I did. I added 4 oz of chocolate chips. I also added a crumb topping to the top and omitted the glaze. This was delicious!! And the staff’s reaction….they all want me to make it again!! The chocolate and cinnamon give you a wonderful flavor, the cake is nice and moist , the crumb topping…
well that’s just the icing on the cake!! LOL!!

Beat cake mix, pudding ,water , eggs and oil for 8 minutes on medium speed .  Add butter extract, chocolate chips  and vanilla  ,mix till incorporated. Pour half of the mixture into the buttered pan.  Mix sugar and cinnamon and sprinkle half the mixture over the batter. Spread the rest of the batter and sprinkle the rest of the sugar mixture on top.  Swirl knife through, .  Instead of the glaze I used the crumb topping recipe.  Make topping and sprinkle over cake.  Bake cake 30 to 35 minutes, test for doneness.

Topping
½ cup butter, room temperature
1 cup granulated sugar
2/3 cup all purpose flour
1 teaspoon cinnamon ( I didn’t use the cinnamon in the topping because of the amount of cinnamon in the cake)

Cream together the butter and the sugar. Add in the flour and cinnamon and mix until crumbly. Sprinkle over the batter.

All looks fabulous but that coffee cake is calling my name!

That coffee cake looks fabulous! Of course with chocolate and cinnamon how could you go wrong? And the chicken skewers sound delicious too. Great dinner ideas.

I can’t tell you how much I would like a piece right now. It’s torture to look at these photos, torture! 🙂