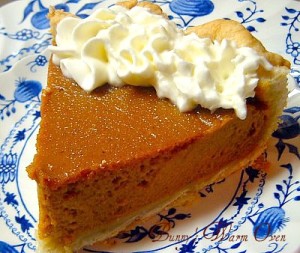 This is a handed down family recipe. Opal’s Pumpkin Pie has been a dessert at the White House for a former president.

Opal Beebee’s daughter served in the National Guard, she met a Pastry Chef who later worked in the White House. The pastry chef called Opal and asked her for this pumpkin pie recipe to make at the White House for Thanksgiving dinner. After making this for my Thanksgiving dinner I can totally understand why he wanted the recipe. This is the creamiest pumpkin pie I’ve ever had. I’m so glad I decided to break free from my usual Libby Pumpkin Pie recipe and make this. The recipe makes 2 pies which is good because one of the two I made is already gone. Make sure you use CREAM when you make this, that’s what makes this pie so good. The recipe called for cloves and ginger, I’m not real fond of either so I used nutmeg for the ginger and eliminated the cloves. My pies took a little longer than an hour to bake in my oven so just keep testing, when the knife comes out clean from the center of the pie it’s done. I garnished this with whipped cream but it didn’t need it, All it needs is to be eaten! 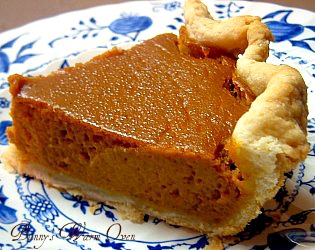 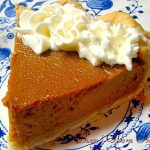 Mmmmm! I love pumpkin pie! I use vanilla ice cream in mine but I bet it would be AMAZING with cream!!!

Now I want a slice of pumpkin pie! 🙂

What a delicious looking and sounding Pumpkin pie! I hated pumpkin pie as a child, but have come to like it somewhat as an adult. I’ll deffo have to give this one a try!

Wow, that pumpkin pie looks like it’s made of silk! Yummmm! Happy Thanksgiving!

Your pie looks amazing and can only imagine what the cream brings to it!! I must try this soon 😉

As you, I am so used to the Libby’s pie version which is good. This looks mmm, mmm good! Love your pics!!

Sounds so creamy and delicious Bunny!!!

You can actually see the creaminess in this pie. Opal must have been one of the most popular people around. The only thing that would upset me is that once you eat it – it’s gone.

It even looks creamier than Libby’s PP. Yum!

This sounds fabulous. I am going to keep this and try it for sure!

I’ve always wanted to try a different recipe than the one that comes on the can. This looks great!

i think opal’s a terrific name, and apparently, she makes a mean pumpkin pie. it looks glorious!

Hi Mary,
My name is Chris and I am Opals grandson. This pie was such a regular thing growing up that I didn’t make a big deal of it (everything my grandma made was wonderful). I was still fairly young when the recipe went to the White House during the Regan, Bush, and I believe it lasted through the Clinton years and May still be being served.. but who knows? Anyhow, just a bit of correction, the name is spelled Bebee, and my mother was in the Air Force and a friend of hers ended up running the kitchen at the White House by way of Naval service (if I recall correctly). That’s about it.. I hope everyone enjoys the pie as much as I have over the decades and yes, I make it regularly and I do it pretty well if I do say so myself 👍🏼

I’m so honored to have her recipe on my blog Chris. The history of the pie is amazing thank you and thank Bebee for her wonderful pie recipe. And thank you for your service to our country.