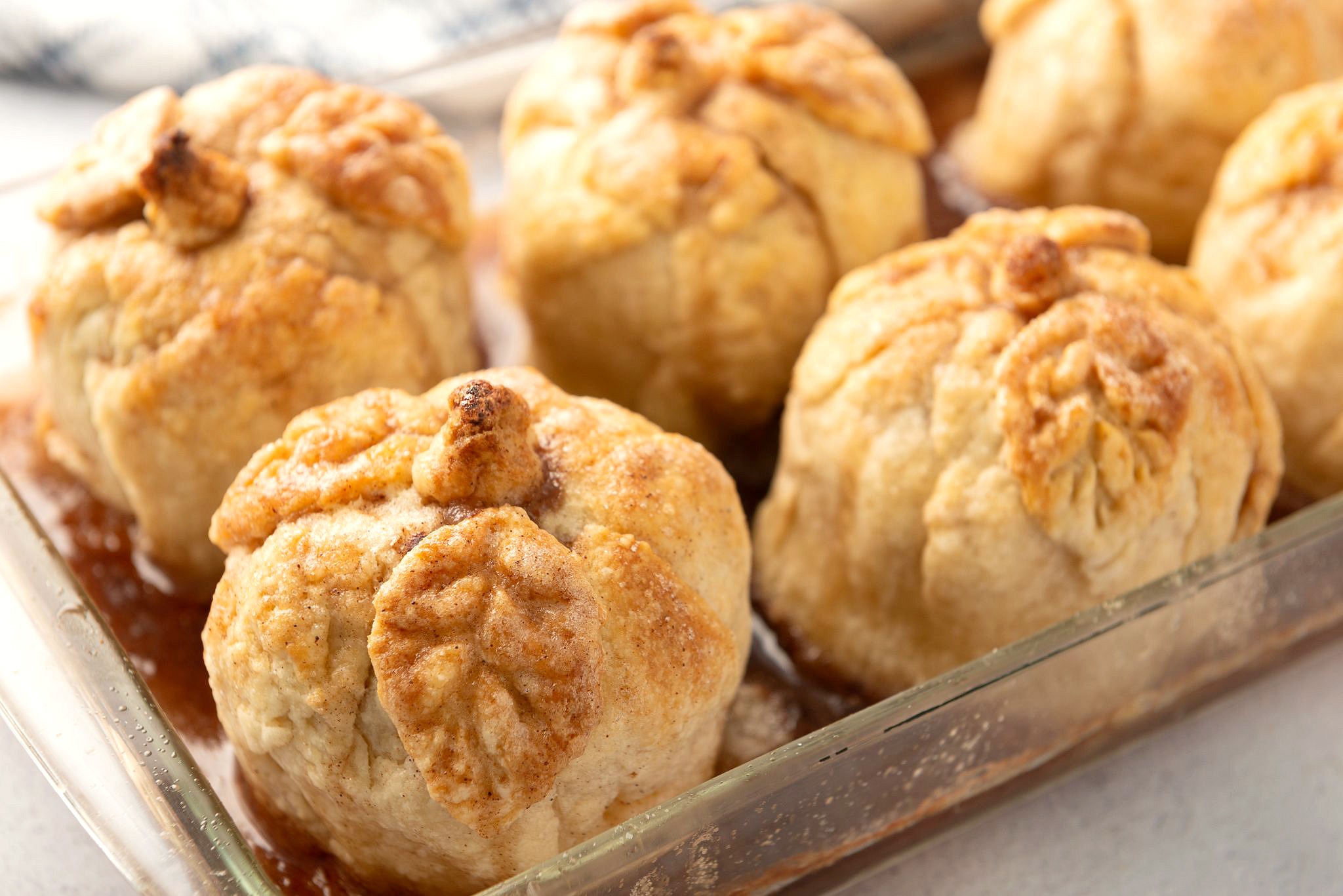 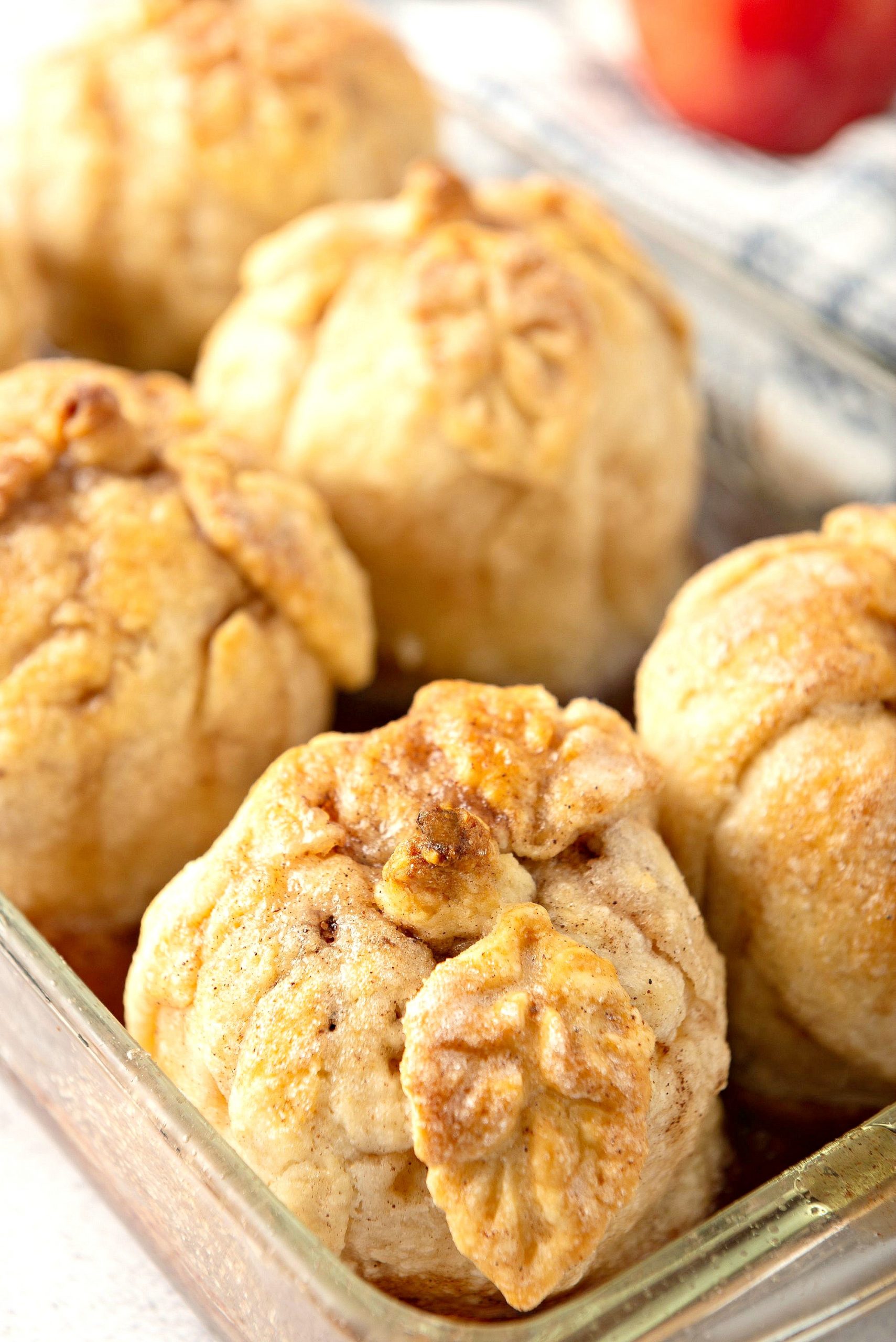 These are the only apple dumplings I’ve ever made.  This recipe is so good that I have never actually looked for another recipe.  The crust is so very soft!  The sauce that’s poured over the dumplings before baking and then after they are baked, is just delicious.  Everything about this recipe is pretty much perfect as far as I’m concerned.
I’ve always used Macintosh apples to make the recipe. Macintosh apples are an eating and baking apple. They’re also not as big as a Granny Smith or other baking apples. I wanted a small apple, like the Macintosh to make a one serving apple dumpling that wasn’t overwhelming to eat in one setting for dessert.   Let’s gather the ingredients and make it together. 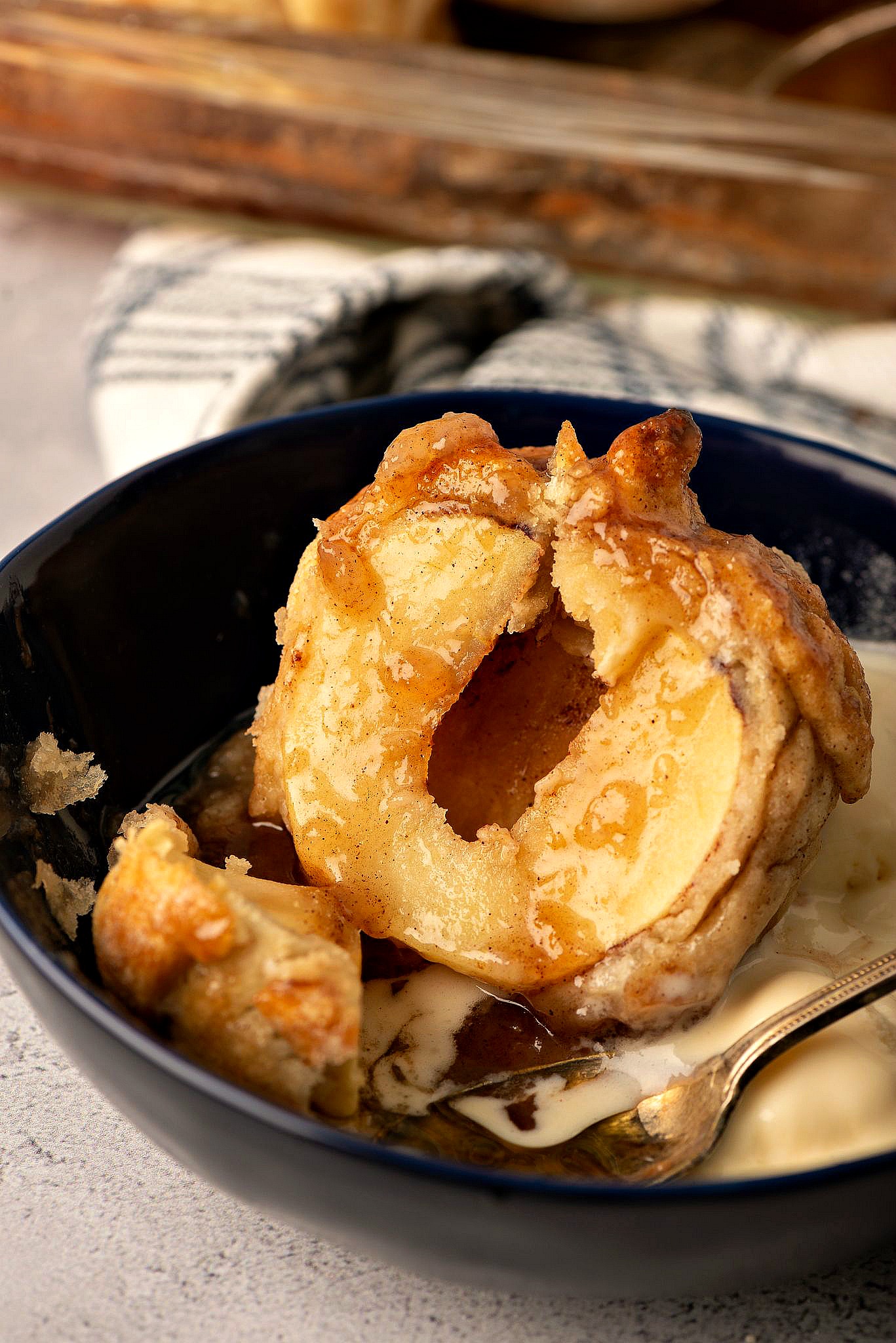 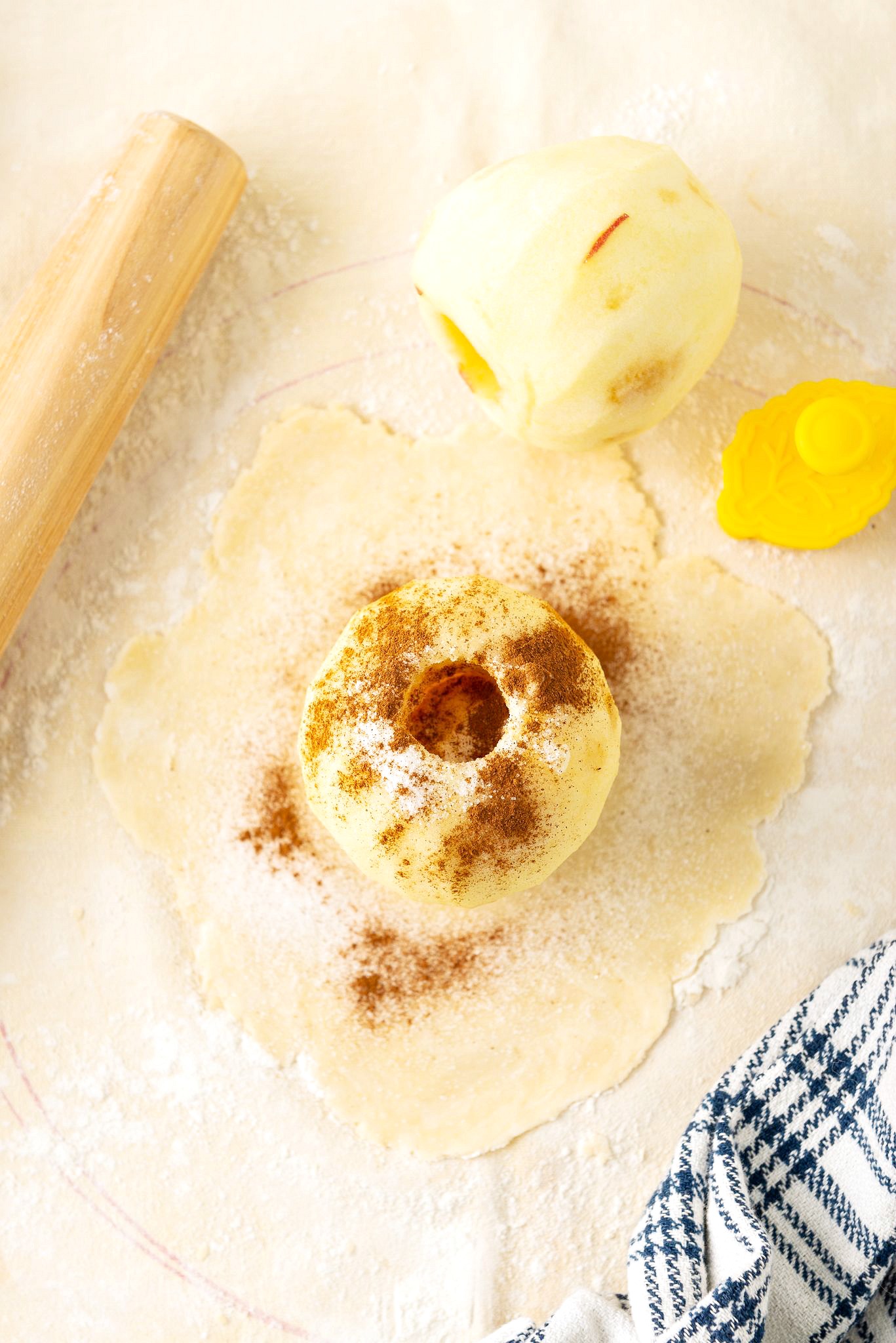 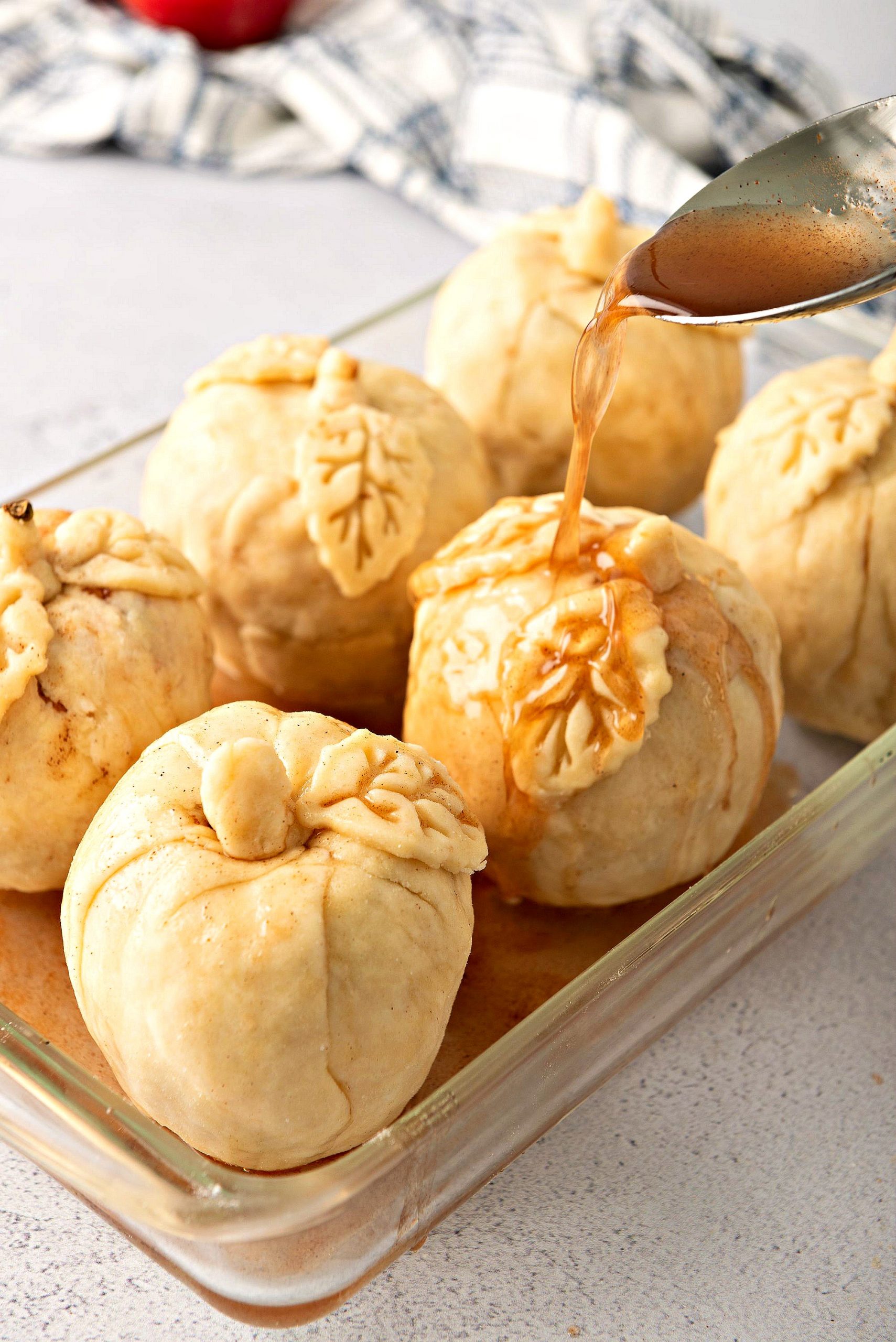 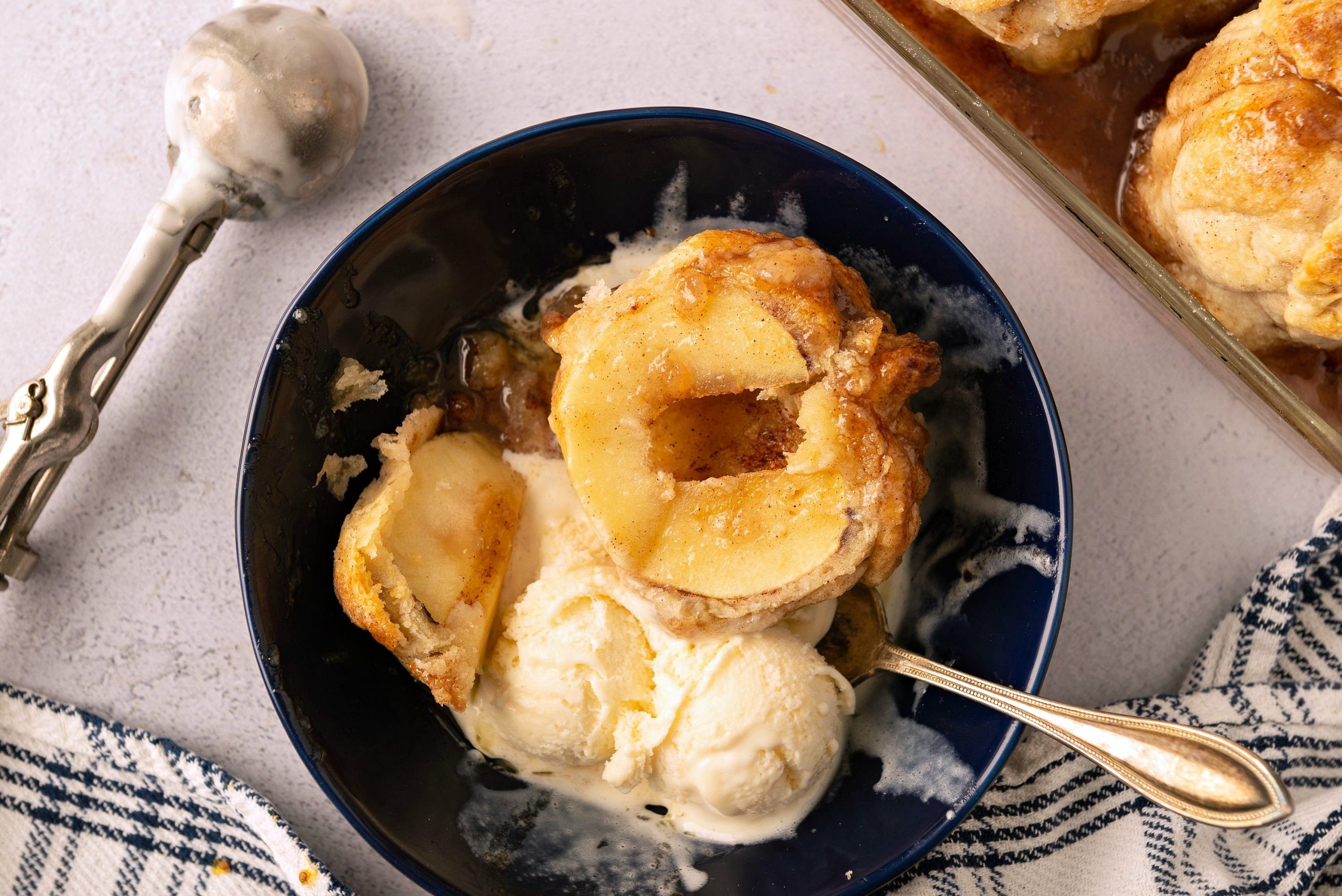 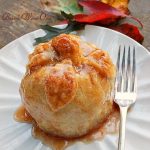 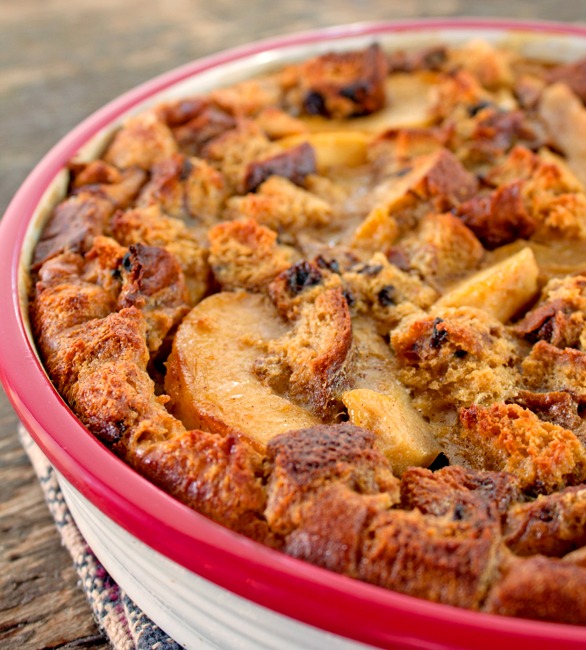 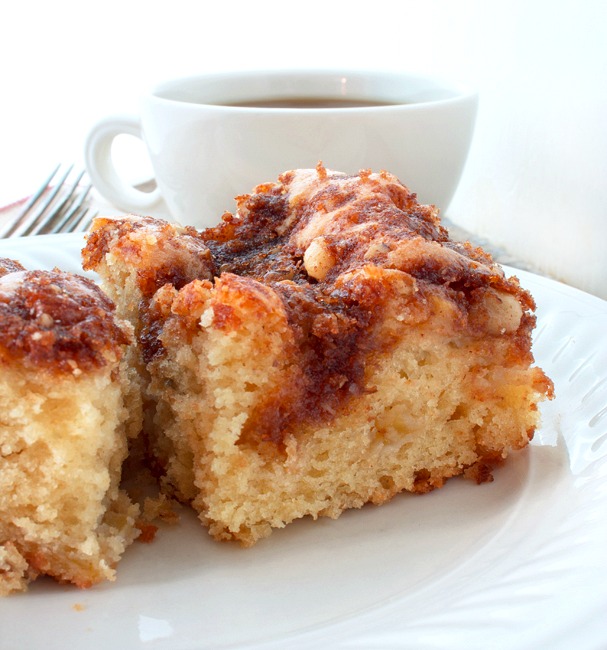 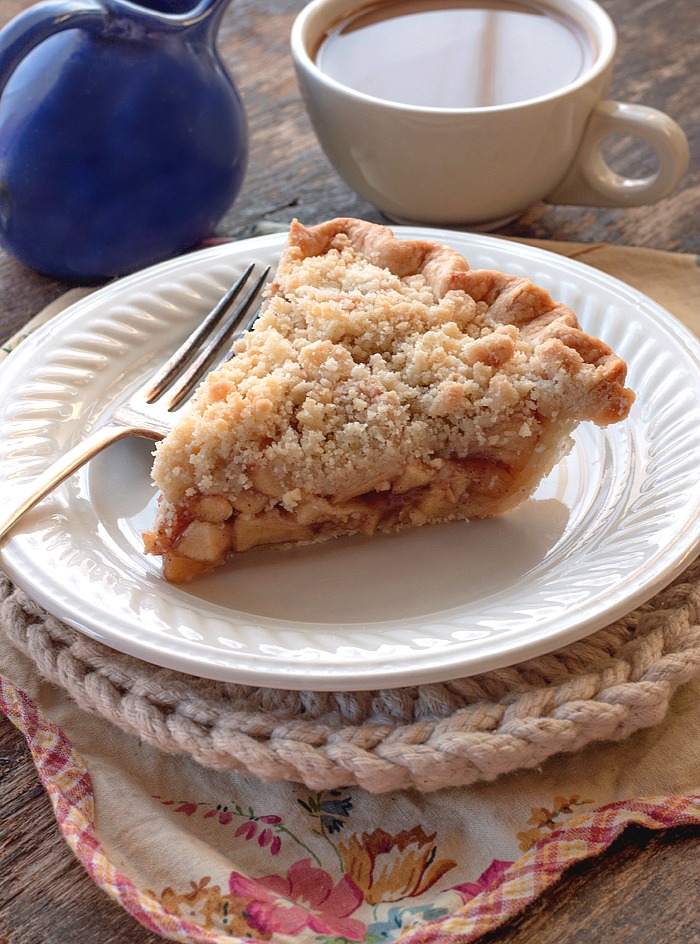 Mary, I made these couple weeks ago (6pieces of heaven 😉 and I’d love to make a bunch for the Thanksgiving crowd. Have you or anyone else ever made them a day before they went in the oven? Cooking for 20+ so sure could use the input if they would be ok and any tips to keep the apples fresh? Thanks SO much!!
Debbie from wisconsin

Anonymous, I’ve never made the dough ahead of time. You probably could and keep it in the fridge wrapped in plastic. You might beable to keep apples fresh by tossing them in lemon juice and putting those in the fridge too.

Hi there! MY family and I simply LOVE these! I my father practically licks the pan. But I have a problem I was hoping someone could help me with. Ever time I make them my shell falls off. They never come out complete. I have tried numerous shells, homemade and store bought. I can’t find anything that works. I would REALLY appreciate any suggestions. Thanks

Megan the only time the shell ever broke for me was when I cut the apple in half instead of using a whole apple cored and peeled. I also mold the dough around the apple with my hands so it’s a snug fit. I hope this helps. You might also try dicing the apples and making a little bundle with the dough as well. Thank you for trying and loving the recipe!

A great recipe I can’t wait to try out. I love apples and cinnamon, and especially dumplings!

I came up with a related recipe for Apple Dumplings in a cinnamon sauce. While different from your own, I think mine is a unique take on the dish. I’m new to the Food Blog scene and would love some feedback from a pro like you. Check out my recipe if have time.

Michele I just stopped by and they look terrific! Im gonna look you up on FB!!

I use Braeburn apples if I can’t get Northern Spy’s.Braeburn’s are better than most others including Mac’s for baking.
This is a killer recipe. Try the recipe for Bunny’s Easiest Pineapple Cake. It is absolutely the best cake in the world and almost foolproof to make . No cake mix required..Five Stars Gold Stars or whatever..

We’ve actually made these but in the middle of the apple we put apple pie filling, raisins and liquor and a nob of butter. They are amazing with a premium vanilla bean ice-cream.

Thank you Anonymous!! I’m so happy you made both the apple dumplings and the pineapple cake!!

Thank you Joanne, it was definitely a fun post to do!

Got this from Skinnytaste. Looks awesome but I don’t see the nutritional info???

Hi Anonymous,I’ve never had any nutritional info about the recipe.

I would like to bring these to my daughter in college. My question is: Can I make these the night before and when I see my daughter cook them at her house..

Hi AnnMarie, I’ve never made them up and let them sit over night before baking. I would say you could make the sauce and the dough and keep it in the fridge for the next day. Making sure the dough is covered in plastic wrap so it doesn’t dry out. You would have to reheat the sauce before pouring over the apples because the butter will solidify. And then peel and core the apples at your daughter’s apartment. Making them up and keeping them in the fridge overnight, I would be afraid the apples would turn brown on you. Hope this helps.

These look amazing – all I need is a cup of coffee to go with one. Thank you for sharing at Share It One More Time… Cathy

Your Apple Dumplings are just gorgeous! What a wonderful recipe, and now I am SO excited for FALL!

What a spectacular fall dessert Mary!

These look incredibly wonderful! We love apple dumplings, especially this time of year, thanks for sharing!

What BEAUTIFUL apple dumplings! And it looks so delicious too!