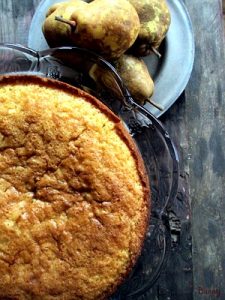 I’ve never taken a recipe and had to convert grams to US measurements.  I wanted to make this recipe so bad that I decided to do it, not without some apprehension though.  To Read More, Click On The Recipe Title.
I used DianasDesserts chart which helped me understand that even though 100 grams equals a cup, it depends on whats in the cup.  A cup measures volume, a gram measures mass.  I was convinced that by the time I was done comparing my results with other conversion charts which sometimes gave me different measurements I was gonna end up with a nervous tick.  I decided to just..do it!!  I made this cake twice, the first time I made it with regular flour and added one teaspoon of baking powder for leavening.  The second time I used the self rising flour stated in the recipe.  The pictures I have are of the cake made with the regular flour.  This was a wonderful cake, nice and moist with a slight cinnamon flavor.  The ground almonds in the cake were delightful.  The caramelized pears were a treat.  Put it all together and you have one amazing delicious cake.  This recipe came from a blog called Tinned Tomatoes. 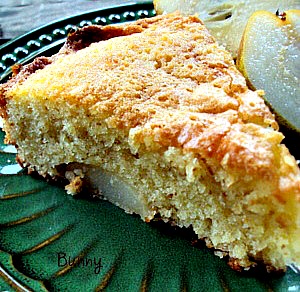 I had a couple of issues with the directions in the recipe.  The recipe said to whisk the sugar and butter together.  I tried that and ended up with a whisk full of butter. I guess my definition of soft butter differs from the recipes definition.  After I dug the butter out from the middle of the whisk I got my electric mixer out.  The butter whipped up fluffy and pale just like the recipe called for, then I added the sugar.  The recipe didn’t have vanilla  extract as an ingredient…I added it.  It went against every grain in my body to make a cake without vanilla in it. 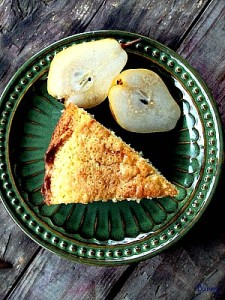 The first time I made the cake I cut the peeled pears into three slices per the recipe directions
.  So each pear gave me three large slices. Well they ended up being to heavy for the cake and sunk to the bottom, which really wasn’t a problem they were delicious.  The second time I made the cake I took those three slices and sliced them thinner, which allowed the pear slices to suspend themselves in the middle of the cake. Nice.  Lets talk caramelized pears, this was the first time I’ve ever made them .  By themselves they are
exquisite.  And they don’t take a lot of time to make.  I made them for a quick dessert one night when we had company and they were wonderful!  So I started thinking….caramelized pears in oatmeal, on ice cream, in crepes, on top of cottage cheese, in yogurt…yes the possibilities are endless.  Caramelized pears are a very good thing.  I am very happy with my little kitchen adventure in making this cake.  I hope my effort helps you to want to make it too, you’re gonna love it. 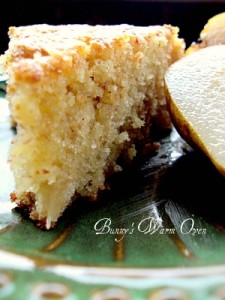 Heat the oven to 350 degrees.  Butter a 10 inch spring form pan.  Cut a circle of parchment paper or waxed paper to fit the bottom of the pan and butter that as well.

Peel the pears and cut into 3 long slices, ( hold the pear upright and slice as close to the core of the pear as you can turning the pear as you slice) cut those slices into thinner slices Melt the butter until bubbling and then add the sugar. Swirl the butter and sugar around in the pan until the sugar starts to melt.  Place the pear slices in the syrup and cook until they start to caramelize.  They will  begin to turn brown and become tender, remove them from the pan and set aside.

With an electric mixer blend the butter until it turns pale and fluffy.  Add sugar and blend well.  Add eggs one at a time mixing well after each addition.  Turn your electric mixer off, sift the flour over butter/sugar mixture in your bowl.  Then sift ( my ground almonds weren’t able to be sifted  so I sprinkled them over the flour) ground almonds over flour, at this time sprinkle the cinnamon on mixture as well and fold everything together.

Smooth the cake mixture into your prepared spring form pan, top with the pears, making a flower pattern. Spoon any left over caramel from the pan over the pears and the bake in the middle of a pre-heated oven for 45 minutes, until a skewer comes out clean.

Pears are a real seasonal favourite here at this time of year. Your cake looks fabulous Bunny!!

thanks for your thorough review of this recipe! i learned my lesson a long time ago not to whisk butter that was any form except completely melted. 🙂

Like my previous comment, from today, I am reading through your recipes. I had to snort about having a ball of butter in the middle of a whisk. It’s happened to me, as well. I don’t bake enough with pears, and we love them. I’m glad you converted the recipe so that I could try it!
PS: Thank you for including me on your blog roll!