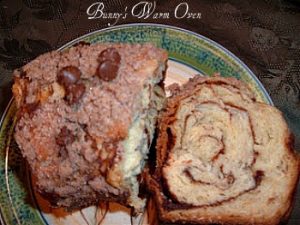 I have a Better Homes and Gardens Test Kitchen Favorites Cook book that I was looking through the other night trying to decide what I was going to make on my days off. I usually bake on one day off and clean the other. I was nearly through the book when I saw the picture of this coffee cake, of course they’re picture was better than mine but, there it was in all it’s glory! That’s it !! That’s what I’m going to make!  To Read More, Click On The Recipe Title

I saw the swirls of chocolate through the cake, the crumb topping and I couldn’t wait to make this. I’ve never made a coffee cake with yeast, I’ve made bread, cinnamon rolls, sticky buns….this can’t be that different. And it really wasn’t, like any other recipe the first time you make it you just have to go through the recipe in your head a couple times and understand what your doing. I used milk chocolate chips instead of semi sweet just because that’s what I had on hand. I didn’t put any nuts in this cause Sam doesn’t like any nut but peanuts. My only suggestion with this would be, that when you have to put the melted chocolate on the dough after you roll it out, put the chocolate more in the center of the dough . Give yourself plenty of room on each side because as you roll this up, the melted chocolate moves. I had to put this in a warm oven to get it to rise the first time because my kitchen was a bit chilly. I will definetly make this again!

GREAT LOOKING CAKE BUNNY!!!! I could go for a piece with a cup of coffee right about now!!!!

Yum! I second Carol, that is a great looking cake. I would LOVE a piece right now!

Welcome to The Foodie Blogroll!