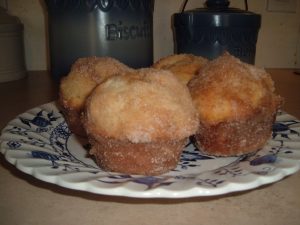 Today was my day to bake, after the chocolate cake with peanut butter frosting I made for Amanda’s birthday I wanted something different. A friend sent me a recipe from a blog called Bake and Destroy.

The recipe….Donut muffins. well I was in the mood for muffins and donuts? I’m always in the mood for them!.. This recipe was wonderful. After you bake the muffins you bathe them in butter and roll them in sugar and cinnamon……I was in heaven!! I followed the tips another friend had given for making the muffins rise up nice and tall and have beautiful domes on them. The result was a wondeful muffin , soft and fluffy with a crust like coating of cinnamon and sugar that was as beautifully tall as it was tasty. I will be making these alot! I hope you enjoy it as much as we did! I ate one warm and I ate one cooled and both were just what I wanted them to be and more.
Donut muffins
From : Bake and Destroy
Baking instructions were adapted.
For the muffins:
1/3 cup oil
1/2 cup sugar
1 egg
1 1/2 cups flour
2 tsps baking powder
1/2 tsp salt
1/4 tsp nutmeg
1/2 cup milk
For the topping you will need:
1/2 cup sugar
1/2 cup butter, melted
1/2 tsp cinnamon
Preheat the oven to 425 degrees. I greased the muffin tins with butter, don’t use muffin liners because your going to dump these out while they’re hot to roll them in butter and coat with sugar and cinnamon.
Cream the oil, 1/2 cup sugar and the egg in a medium bowl. in a small bowl, mix the flour,baking powder,salt and nutmeg. Alternately add the flour mixture then the milk ending with the flour, in three additions for the flour and 2 for the milk. Spoon the batter into the greased muffin tin. As per my friends suggestion to make nice domes, I filled the muffin tin almost full with batter, I also baked the muffins at 425 degrees for about 7 minutes, then turned the oven temp back to 350 degrees and finished baking the muffins until a wooden toothpick inserted came out clean. this recipe made me 6 regular muffins.
Pin
Share
Tweet
Share

I tried these this morning and they are SOOOOOOOO good!!!

I think my muffin tins are smaller then the average ones because I got 10 out of the recipe.