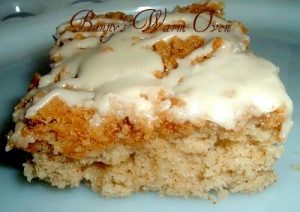 I’ve got so many good recipes bookmarked to make it’ll take me a year to get them all made. I decided to start with this one from RecipeZaar.   To Read More, Click On The Recipe Title.

You can have this cake in the oven in about 15 minutes, I didn’t even use the mixer to make it, just my whisk. This cake is very soft and fluffy, I added a tsp of cinnamon in the batter and a tsp of cinnamon in the crumb topping. I used the crumb topping that I made for the Apple Crumb Pie. But there’s a topping included with the recipe and next time I make it I will use the recipe topping. I also used 1 1/4 cups of cream instead of milk. This cake was a nice breakfast treat, my husband and I really enjoyed it. It’s not an overly sweet cake so the glaze adds the sweetness. I threw in a chopped apple that went well with the cinnamon. You could actually do alot with this little breakfast gem, nuts, fruit, chocolate chips….let your imagination run wild, then grab a cup of coffee and enjoy! 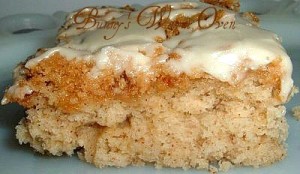 Directions
Set oven to 350 degrees F.
Prepare a greased 13 x 9-inch baking dish, or two 8 or 9-inch round cake pans (although the batter will seem like it will fit into only one 8 or 9-inch pan, this flop rises very high and will run over the sides if baked in just one pan).

In a bowl mix the 2 cups flour, 1-1/4 cups white sugar, milk, vanilla or almond extract, baking powder, pinch of salt, cinnamon and egg (if using) until just combined careful not to overmix.  Fold in chopped apples.

Generously spread brown sugar and cinnamon on top.
If desired sprinkle chopped walnuts or pecans over top.
Drizzle melted butter over top.
Bake for about 20-25 minutes for 8 or 9-inch round cake pan, and about 30 minutes for a 13 x 9-inch pan.

Ingredients
2 cups powdered sugar
1/4 cup whipping cream (any amount to desired texture start with 1/4 cup, or use 18% table cream)
1 1/2 teaspoons vanilla extract or almond extract
Directions
1Whisk all ingredients in a bowl adding whipping cream until desired texture is achieved (do not make it to thin, or it won’t stick on cakes!).

Oh my! This looks reaaalllly good!

It looks so tasty!!

I’m having this love affair with apple everything these days. What makes this recipe so popular is of course how easy it is to put together.

Oh man you have been baking up some tasty things here! The cream cheese muffins ..err cupcakes have peaked my interest! I have bookmarked them to try out!

Oh, yum. This looks like the perfect antidote for when I’m craving cinnamon rolls, but don’t have the time to make them!

Plus, how can you NOT love something called a FLOP??!!

It looks so wonderful. And I’ve got everything needed to make it! Hot damn!

i have so many recipes bookmarked, it’d take me three lifetimes to get through them all! 🙂
this recipe, however, has been bookmarked and moved to the top of the list–YUM.

I know how you feel. I have three binders filled with printed recipes I want to try.

And now, I shall add another
cinnamon coffee cake that looks so yummy and fluffy I want a piece right now. haha.

For the love of all that is Holy!
I just found your blog & while I thank you my tushie is going to be seeking revenge.
WoW!
These recipes look fabu!
I can not wait to try them.

I so just bookmarked your blog.

It is one of our first truly chilly mornings here and I would love to have that right now with my tea! You can’t go wrong with apples & cinnamon…

Looks pretty darn good and so moist, and easy… loving it!!

I made this once before using a recipe I got from zaar and hated it, but yours looks lovely. Obviously I used the wrong recipe! I shall have to give this one a try!

Oooohhhh yummy! Can’t wait to try this, it looks so awesome! Hey Bunny, saw your comment about entering the Cooking with Alicia & Annie contest. I hope you do! I hope I can get some bloggers to help me spread the word by posting the graphic and a link to the contest.