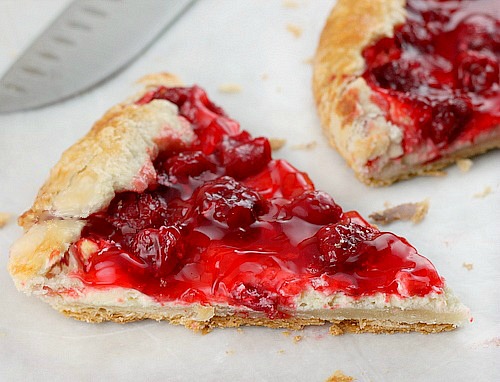 A Crostata is a rustic free form pie, usually made with fruit.  This one is made with a cream cheese filling on the bottom and a cherry pie filling top.  Every once in awhile I get hungry for specific flavors.  This time it was cream cheese and cherries together.  I wanted something to put it in, something that would remind me of a danish  but not necessarily a danish …just something flaky and delicious.   Then I remembered the pie crust that I make whenever I decide to make a crostata.  It’s an all butter crust and it’s magnificent.  It’s the flakiest most tender pie crust I’ve ever made.  My idea was taking shape, it was all coming together, cream cheese filling and cherries in a rustic free form crostata.  It was baked and cooling, I left the kitchen for about 20 minutes came back and there was a slice missing?  Paul had gotten his taste first.  How was it Paul? ” Oh my gosh”… was his reply. And it was indeed…Oh my gosh good!

The cream cheese filling, cherry pie filling and flaky pie crust came together beautifully.  And it was easy…so easy to make.  The cream cheese filling takes minutes to whip together, I used a canned pie filling…and by the way, you can switch the pie filling out to any flavor you want.  The crust is a cinch, the directions are pretty detailed because I wanted it to be perfect for you.   No reason not to make this one Kids, it’s easier than “pie”.  Enjoy! 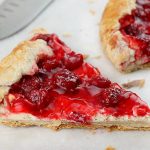 Love the flavors of this crostata. This is my favorite way of making pie, because it’s just to easy and rustic! My husband would love this!

I love it to Renee, thank you for coming by!!

I am confused,(not unusual, I am told!!) Your instructions say fold the dough over the filling. Just around the edges, or over the whole pie? Pics indicate just the edges.