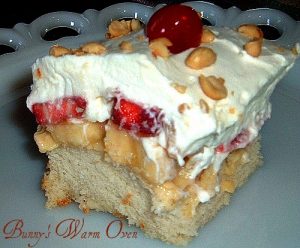 I think the weather around here has got me in the mood for refrigerated desserts. Something cold, sweet and smooth, yeah that’s what I’m in the mood for.   To Read More, Click On The Recipe Title.

This is a spin off on a dessert I use to make years ago called Banana Split Dessert. I made this cake once before but with a box mix, instant vanilla pudding and Cool Whip. Today I wanted to see what it would be like if I made it entirely from scratch. I started out with a white cake recipe, it doesn’t matter what recipe any one you have, make it in a 13×9 inch baking pan. My next thought was what do I replace the instant vanilla pudding with? I decided to try my hand at pastry cream, I never ( I thought) made pastry cream before, well it turns out pastry cream is basically homemade vanilla pudding. I use to make homemade pudding when the kids were little, the technique for the pastry cream was slightly different but easy. So I’m thinking, so far so good. The homemade cake was easy,not any harder than making a cake from a box really, the pastry cream took as long as it would to make a vanilla pudding from a box that you cook, yeah so far I’m doing ok. Then I start thinking about what I’m going to use instead of the Cool Whip, the obvious choice would be whipped cream. Yes whipped cream, but how do I make it keep as long as Cool Whip? Then I remembered Cookie found a recipe on The Taste Of Home Forum and it was called Chef’s Secret Whipped Cream. This recipe used unflavored gelatin to make the whipped cream have the staying power of Cool Whip. I’m all set! 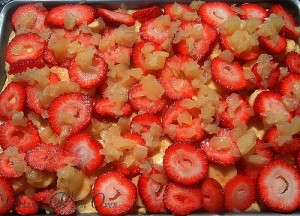 Pretty!! I made the recipe for the whipped cream adding the unflavored gelatin and spread that on top and added some crushed peanuts. 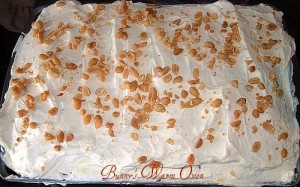 I waited to put the cherries on it till I served it because I didn’t want them bleeding onto the whipped cream. 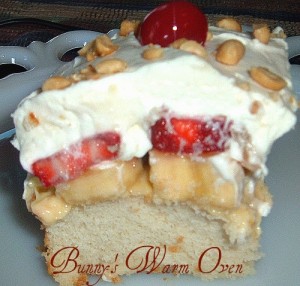 I had to double this recipe to get enough to cover a 13×9 inch baking pan they way I wanted it covered.

CHILL LARGE MIXING BOWL @ LEAST 15 MINUTES. MEANWHILE, IN A SMALL SAUCEPAN, SPRINKLE UNFLAVORED GELATIN OVER COLD WATER; LET STAND 1 MINUTE. STIR OVER LOW HEAT UNTIL GELATIN IS COMPLETELY DISSOLVED, ABOUT 2 MINUTES. IN CHILLED BOWL, WHILE BEATING CREAM ON LOW SPEED, GRADUALLY ADD GELATIN MIXTURE, THEN BEAT ON MEDIUM SPEED UNTIL THICKENED, ABOUT 5 MINUTES. ADD SUGAR, THEN BEAT UNTIL SOFT PEAKS FORM, ABOUT 2 MINUTES.HINT– IF YOU PLAN TO PIPE THE CREAM, WHIP CREAM UNTIL STIFF PEAKS FORM.VARIATION– FOR A FLAVORED WHIPPED CREAM, SIMPLY ADD YOUR FAVORITE EXTRACTS OR LIQUEURS, TO TASTE, WITH GELATIN MIXTURE, THEN PROCEED AS ABOVE..

I haven’t had a BS Cake in years! They are so good. I don’t really care for the taste of cool whip, so I will try the whipped recipe. YUMYUM!

OK-I think I gained 5 pounds looking at the picture of this cake……and I DON’T MIND! Bunny-I think you outdid yourself, girl! And I’m glad the whipped cream worked out for ya! 🙂

i need to make this….. nooowwwwww

mmm. this is fantastic. i’ve never been much for actual banana splits…this is much better. 🙂

I made your apple crumble bars today for my mom’s birthday tommorow! I can’t wait to try them! They might not make it that long.

Bunny, I made your apple crumble last night….oh my God. It’s soo good! I loved it! I ate so much of it I had to lay down–my stomach was bulging out so far I looked pregnant.

And I still have a whole pan left to enjoy. Hopefully Mom gets here (technically it’s for her birthday) before I eat all of it!

I hope you feel better soon. My childhood dog just died last night as well. It’s not comparable to a human family member, but still heartbreaking all the same.

My thoughts and love are with you.

This is cool… I could handle this.

Hey Bun,
I Had no idea that so much work went into this cake. It was wonderful. Jess and I are going to make this cake this week, maybe I’ll even make the whip cream, I know it tastes delish.