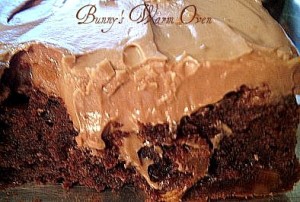 The Super Bowl was FANTASTIC!! What a game, we spent the last 2 minutes of the game pacing back and forth. The STEELERS rule!!  To Read More, Click On The Recipe Title.
My party menu consisted of the Pizza I blogged about in the last post, Pulled Pork Sandwiches and Homemade Potato Rolls with baked beans and cole slaw.   Dessert was Paula’s Mocha Caramel Brownies, a moist chewy lusciously rich brownie topped with a Mocha Cream Cheese Frosting. Oh Paula these were FANTASTIC!!!

My picture isn’t nearly as good as Paula’s, so go visit her and check out her picture and the recipe!

Today I decided to make Baked Apple Donuts, the recipe calls them donuts but to me they’re muffins. Wonderful muffins that are rolled in butter and cinnamon sugar after they’re baked. 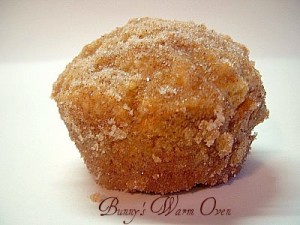 Oh how I love apples and cinnamon. Grace loves cinnamon so much that she has an event that I’m going to submit these to called “Cinnamon Celebration” 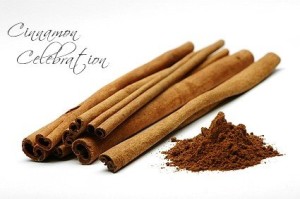 You have until Friday February 13 at 12 midnight to get your entry in. Your recipe, (preferably a recipe you haven’t blogged about before), should have at least 1 tsp of cinnamon in it. Send your entry to Grace at asoutherngrace @ gmail . com using the subject “Cinnamon Celebration” by February 13, along with a picture of your creation, your name, the name of your blog, and the link to your post. Grace can we submit more than one entry?? if we can there will be more coming from me! 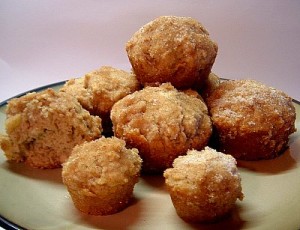 This recipe came from A View of America recipe site. The next time I make these I’ll add more apples (just because I love them), and replace the nutmeg with cinnamon , I’m not real fond of nutmeg and prefer cinnamon. Actually this recipe didn’t have cinnamon in the batter, I added it. I made regular sized muffins (6 ) and decided to make mini muffins( 6) as well, this is a very nice donut ….muffin recipe!

Sift first 4 ingredients and ½ cup sugar together into bowl. Cut in shortening until crumbly. Stir in egg, milk and apple, mixing well. Fill greased muffin cups 2/3 full. Bake at 350 degrees for 20 minutes. Mix 1/3 cup sugar and cinnamon in small bowl.
Remove doughnuts from pan and roll in butter, then in sugar mixture.

Thor sleeps like that sometimes! At his size, it’s absurd!

Chloe, looks like me after all the food I ate during the Super Bowl lol. All you food looks so good. Love it all!

Hi, Bunny, I forgot to tell you that I linked to these bake apple doughnuts on my blog and that I made them again after that for Superman’s work. The second time I made them, I made them all minis and the people went crazy for them. Superman says they absolutely loved the minis and that they were way easy to eat (at work)! Thanks for sharing the recipe with us! http://nagle5.blogspot.com/2009/02/baked-apple-doughnuts-random-thoughts.html

Cute doggie. Your apple donuts are so delicious looking. I must have a go at them. Everything in this post looks awesome.

One of your cinnamon apple donuts will surely keep the doctor away for me. I can see your little Chloe is much loved!!!!

BEE YOU TI FUL…how lovely those brownies & muffin/doughnuts are. Love exhausted Chloe too…it’s a dogs life Bunny, wish I could loll about in gay abandon like that too!!

Those brownies look so good. Definitely something for the next party – and the muffins too!

Those donuts look amazing, but Chloe totally stole the show for me!!! AHHH!!! I just want to rub that wee pink tummy!

I just had to say, regarding your last comment on my blog, about the Jordan Marsh muffins. I totally remember those! I used to LOVE those. You have a recipe for them?

I moved! Come visit me at http://www.aduckinherpond.com.

I have got to try those muffins. OMG they look amazing!