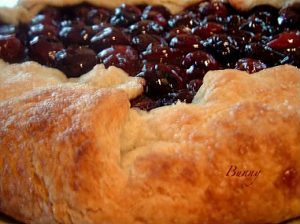 A while ago I made an Apple Crostata that I absolutely loved. The crostata crust was amazing. I had fresh sweet cherries that needed used up and I thought of that crostata.  To Read More, Click On The Recipe Title.
This is fantastic. I think what absolutely makes this crostata is the crust. You could use any fruit you wanted to and it couldn’t help but come out great, because of the crust. It’s flaky and tender– it literally melts in your mouth. I gave 2 slices of this to my sister in law to try. Her comment? “It tastes like a croissant with cherries!”
The crust recipe came from Epicurious, and the cherry filling recipe came from Napastyle. All the work for the crust is done in the food processor! Here’s a link to the Apple Crostata, where there are step by step pictures and instructions for the crust. Trust me….it’s EASY, and the best crust recipe you’ll ever make!
After the crostata came from the oven, I sprinkled more white sugar on top as the cherries weren’t as sweet as I had hoped. The sugar melted, and gave the cherries the sweetness they needed.
Make this…you WON’T be sorry!!

Whisk together flour, sugar, and salt in a bowl, then blend in butter with your fingertips or a pastry blender (or pulse in a food processor) just until most of mixture resembles coarse meal with small (roughly pea-size) butter lumps. Drizzle evenly with 9 tablespoons ice water and gently stir with a fork (or pulse in food processor) until incorporated. Squeeze a small handful: If it doesn’t hold together, add more ice water 1 tablespoon at a time, stirring (or pulsing) until just incorporated, then test again. (Do not overwork mixture, or pastry will be tough.)

Turn out mixture onto a lightly floured surface and divide into 8 portions. With heel of your hand, smear each portion once or twice in a forward motion to help distribute fat. Gather dough together with scraper and press into a ball, then flatten into a 6-inch disk. Chill dough, wrapped in plastic wrap, until firm, at least 1 hour.

Roll out pastry on a lightly floured surface with a floured rolling pin into a rough 16-inch round (1/8 inch thick), then transfer carefully to parchment-lined large baking sheet. Loosely fold in edge of pastry where necessary to fit on baking sheet, then chill, covered loosely with plastic wrap, 30 minutes.Preheat oven to 425°F.

Put baking sheet with pastry on a work surface and unfold any edges so pastry is flat. Spread cherry mixture over pastry, leaving a 2-inch border. Fold edges of dough over filling, partially covering cherries(center will not be covered) and pleating dough as necessary, brush pastry edge lightly with water and sprinkle with remaining 1/2 tablespoon granulated sugar. Bake crostata in middle of oven until pastry is golden and cherries are bubbling are , 40 to 45 minutes

Combine the cherries, sugar, flour, and cinnamon in a bowl and toss well. Fill the center of the dough round with the cherries in an even layer, leaving a border of about 1 1/2 inches. Fold the border up and over the cherries to make a rim. Brush the rim with egg wash, then sprinkle with coarse sugar. Trim the excess parchment with scissors.

What a great menu! Everything just looks delicious and very bookmark-worthy. 🙂

Wonderful menu ladies! Everything on the menu looks yummylicious! Love those cherries Bunny!

This is a perfect summer menu. That watermelon is really cute

What a delicious menu you all have prepared!I make lime chicken too, and love the flavor-your cherry dessert sounds wonderful as the others dishes!Very yummy!

I missed you and am very happy you are back. A 51 hour work week, I hope you get a long well deserved rest right about now. Geez, I am tired for you.

The food looks fantastic, every single dish, I am so terying the crostata.. you have sold me big time with the description of the crust!

Sounds like a perfect meal to me! That jello is too cute!

Gorgeous and will be doing your chicken this week! Happy 4th!

That watermelon is hilarious! Love it!

Happy to see you and everything looks beautiful as always!

Wow, a 51 hour work week?? Yikes!! I’m not even sure I could do that anymore – hope things calm down for ya!

Hope you get some rest this weekend! As usual I love everything in your post, but I have a soft spot for that jello! Its adorable and I am definitely making it for my mom this summer.

I get the biggest kick out of your postings for an entire meal!

Everything looks so good!! (especially that wiggly melon!)

That chicken looks delicious ! And so does the cherry crostata.

This is one mouth-watering menu ladies and I wish I could have just kind of sneaked in and shared with you some of this wonderful food ;0) Yet again I couldn’t choose one as a favourite I would have to sample them all teehee..

Gosh, a 51 hour week now that is some hours put in! I hope you manage a good rest now – zzzzzz for you!!

Everything looks fantastic! I will definately be trying the chicken and watermelon. YUM!

You made us wait a while – but it is an awesome meal you have here! Time to take a break from work! 😉

I love all these items! The cherry Crostata looks amazing!

What great recipes! I know I will have to try the Cherry Crostada…I have a bunch of cherries on my counter right now!

i want all of this and i want it now. cilantro = favorite herb. chicken = favorite protein. jalapeno = favorite spice. cherry = one of many favorite fruits. anything wiggly = just plain fun. great work!