I was on vacation last week and decided to get a little adventurous with one of my dinners.  To Read More, Click On the Recipe Title.

This outstanding quiche recipe came from Epicurious. I’ve never made quiche before, I was afraid the kids and hubby wouldn’t care for it. Boy was I wrong! Amanda ,our 11 yr old kept telling me how good it was with every bite she took! The original recipe consisted of zucchini, bacon and gruyere cheese. Mine had bacon, onion, broccoli and cheddar cheese in it. Nothing fancy, just what I had on hand. I really didn’t measure out the bacon and broccoli, I cut a package of bacon in half and fried it up, I added some chopped onion to a little bit of the bacon grease to give it flavor. The broccoli, it was frozen . I par boiled it a little and threw it into a little of the bacon grease to cook as well. Other than that , I followed the recipe as far as the measurements for the cheese , eggs and milk went. You can make your favorite pie crust, or buy a premade crust. Another interesting idea is to use puff pastry, how good would that be! I’d like to see how this turns out with some cubed up ham in it!! However you decide to make it, this is one good quiche recipe! 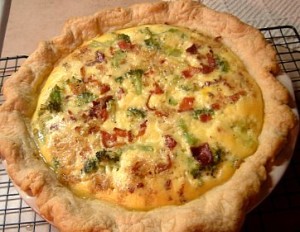 Put oven rack in middle position and preheat oven to 450°F.
Fit pie dough into pie plate and lightly prick all over. Bake according to package instructions, then transfer crust in pie plate to a rack.
Reduce oven temperature to 350°F.

While crust bakes, cook bacon in a 12-inch heavy skillet over moderately high heat, stirring occasionally, until just crisp, about 6 minutes. Transfer bacon with a slotted spoon to a paper-towel-lined plate, reserving fat in skillet.
Add zucchini and 1/4 teaspoon salt to fat in skillet and sauté over moderately high heat, stirring frequently, until zucchini is tender and starting to brown, about 5 minutes, then transfer with slotted spoon to a plate.
Heat cream, milk, pepper, and remaining 1/4 teaspoon salt in a 1- to 2-quart saucepan until mixture reaches a bare simmer, then remove from heat.
Whisk together eggs in a large heatproof bowl, then gradually whisk in hot cream mixture until combined. Stir in bacon, zucchini, and cheese and pour into pie crust. Bake until filling is just set, 25 to 30 minutes. Transfer quiche in pan to rack to cool slightly, about 20 minutes.

Bunny!!! That quiche keeps calling my name! That is best looking quiche ever. I have to make one …asap!

It sounds like you have brunch all sewn up. 😉 Both of these look delicious. I love to bring quiches to office brunches, so I will definitely have to make a note of this one.

That is one beautiful Quiche! And muffins look great as well.

I made this quiche with your adaptations on Tuesday. It was great! I however did not enjoy it as leftovers. Thanks for the recipe!

Those both look so good! I just have to wait for peach season now.